NASHVILLE, Tenn. (AP) — Many NFL general managers and coaches had their children appear with them on camera from home as teams made selections on the opening night of a most unusual NFL draft during the coronavirus pandemic.

The scene behind Titans coach Mike Vrabel stood out Thursday, with one teenager in a superhero costume and the other in one of his father’s old Pro Bowl jerseys.

What the hell’s going on in Mike Vrabel’s house right now? pic.twitter.com/QwEOqLVsYV

And yes, Vrabel had to explain what was going on in a video call with reporters after the Titans drafted tackle Isaiah Wilson.

“It’s been a long quarantine over here, man,” Vrabel said. “We’ve got a bunch of 19- and 18-year-old kids, and, you know, they’re stir crazy. And again, they saw all the other kids as the draft wore on and they said, well, we’ll give our own little spin to it. It was fun.”

Screen grabs circulated on social media showing someone in the background, and Vrabel made clear that his oldest son Tyler, an offensive lineman at Boston College, was not caught in the bathroom.

“Tyler was sitting on a bar stool next to his mom, and as fate would have it, it came across as probably something other than that,” Vrabel said. “Carter and Jackson wanted to be a part of it and stand behind me. Tyler wanted nothing to do with it. So, you know, we’ll see where Tyler goes and tries to head back to Boston College here when things clean up.”

The suit worn by Jackson, a friend of Vrabel’s younger son Carter, originally was planned to help attract more fans to their high school’s baseball games this spring. The suit mimics the Freeze, an in-game race promotion by the Atlanta Braves.

“I think that probably came together in about 10 or 15 minutes,” Vrabel said. 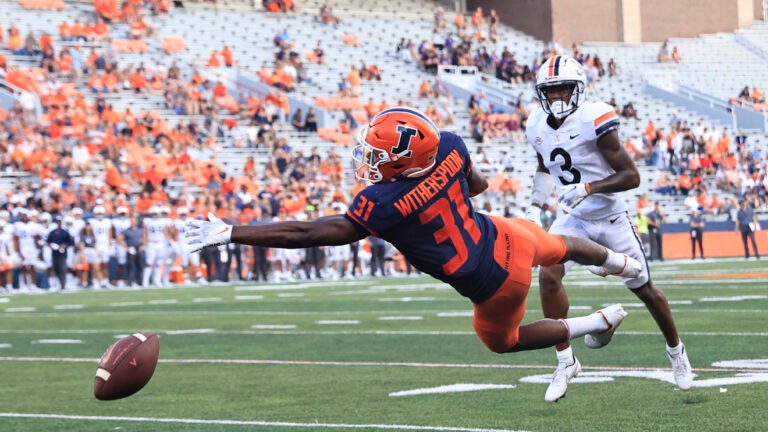