A day after taking Michigan linebacker Josh Uche in the second round of the 2020 NFL Draft, the Patriots selected fellow Wolverine Michael Onwenu, a 6-foot-3, 350-pound guard, in the sixth round Saturday.

The Patriots traded up to choose Onwenu, giving the Indianapolis Colts picks No. 212 and 213 in exchange for the 182nd overall selection. Onwenu, a three-year starter, played predominantly at right guard in college, but he also has varying levels of experience on special teams, at left guard, as a defensive lineman, and snapping in practice.

In a conference call with reporters Saturday, Onwenu said he didn’t discuss with Patriots coaches where he’ll play specifically, noting that he’s happy to help out wherever he’s needed, including guard, tackle, center, or anywhere else. That versatility extends beyond which position he’s playing.

“I went through two offenses, so I’ve had a background of multiple schemes and plays that will be easier to transition to at the next step,” Onwenu said.

He allowed just two sacks in 1,198 pass-blocking snaps at Michigan, and zero last season, according to Pro Football Focus.

Onwenu said he played at around 368 pounds last year, indicating that he’s lost some weight since. He said he’s “liking being lighter” and will gladly make adjustments if the Patriots see fit.

.@UMichFootball Michael Onwenu, who competed at the Shrine Bowl has natural play strength and can drive DL when he gets good leverage

Good fit for the @Patriots @MikeReiss ?

He doesn’t have any strong ties to the Patriots, but he noted that it made him nostalgic when Tom Brady returned to Michigan a few years back for a game. Onwenu believes playing at Michigan, and going up against Don Brown’s defenses in practice, helped prepare him for what’s to come.

“Don Brown, he brings something different every week,” Onwenu said. “So, it’s keeping me specifically on my toes, just having me ready for everything.” 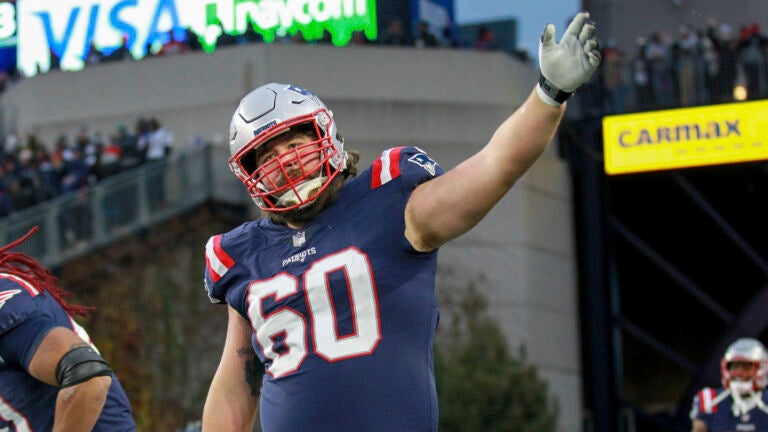