As more feedback poured in Sunday, NFL Commissioner Roger Goodell said he had told league staffers that the smooth operation of the three-day, seven-round event was a proud moment for the league, adding that some of the elements utilized over the past few days can be incorporated into future drafts.

“To see the reactions I got from people I didn’t know, people I did know, family – it definitely struck a chord with people,” Goodell said in a phone interview Sunday afternoon. “It was overwhelming. I don’t think we’ve ever had a reaction like that. And I wrote a note to the staff on the way out from my house. I said I’m not sure in our 100-year history we’ve had a finer moment and that I’ve been more proud of our people, because it was that kind of experience for us.”

Among the messages received Sunday by Goodell was one from a general manager who had been opposed to the league holding the draft on time.

“I won’t disclose [which general manager], but I’ll just read you this line: ‘As a GM who was against holding the draft as scheduled, thank you for having the vision to proceed. It was an experience with my family that I will never forget.’ It’s just cool,” Goodell said.

Viewers saw NFL coaches and GMs working from their homes, surrounded by their kids and other family members. They saw New England Patriots coach Bill Belichick’s dog. They saw just-drafted players in living-room celebrations with parents and siblings.

“I do think there are clearly things that worked this year, like the imperfections,” Goodell said. “I think people had a lot more forgiveness than they’ve had in the past, just because of the environment. So if there was a delay or the video wasn’t very good, my guess is people sort of said: ‘That’s cool. No problem.’ . . . The big thing that I kept pushing on our group was: ‘Let this unfold. Let it happen.’ “

There were no major glitches or technological breakdowns evident during the joint broadcast by ESPN and the league-owned NFL Network. (ABC had its own telecast Thursday and Friday nights, then joined the combined broadcast Saturday.) The NFL had been prepared to “stop the clock” and provide additional time between picks if a team experienced connectivity issues.

“We didn’t at any point even consider delaying the time frame on the clock,” Goodell said. “We didn’t have any clubs complaining that their information didn’t work. That all worked really well.”

Even after the NFL conducted the bulk of free agency for veteran players last month, an advisory committee of GMs recommended to the league that the draft be postponed. But owners were adamant about moving forward, Goodell said. The live event in Las Vegas associated with the draft was canceled. The league closed all teams’ facilities to ensure competitive fairness during draft preparations and proceedings.

“I didn’t ignore those,” Goodell said of the objections. “You have to hear those and you have to balance those and try to see what it is you can do to try to address those issues. . . . In my gut, I felt like we should go forward. I was very open about that and felt it was appropriate. . . . I do believe there’s a place where people need an escape, that people need a diversion. People need to have something else that lifts them. There’s an experience that we’re all longing for. And I think that was part of what drove me is that: Could we be that?”

The NFL focused on the health and safety of participants while making its preparations, Goodell said. Executives from companies such as Amazon Web Services, Verizon, Microsoft and Bose contacted the NFL to offer technological advice and support, he said. (Amazon founder and chief executive Jeff Bezos owns The Washington Post.)

Goodell announced teams’ picks on the first two nights, expanding on his usual Round 1 duties. He participated from the basement of his home in Westchester County, New York. By Saturday, his on-screen time was reduced and he was able to multitask with work around the house. He closed the telecast wearing a T-shirt in an atypically dressed-down appearance.

“The draft is sort of my spring-is-really-here [moment],” he said. “It was absolutely a gorgeous day in New York yesterday. So I was putting screen doors up. . . . I had the draft on.”

Going forward, the NFL will have to decide which facets of this draft can be replicated and which were merely products of the unique circumstances.

“There are clearly elements of the virtual draft that we can do in future drafts because they actually gave more access,” Goodell said. “I’m certain if you gave the GMs and the coaches the opportunity to be in the facilities versus their homes, they would go to the facilities just because it’s easier and they have a better communication system. So I think that’s probably something that we wouldn’t continue. But the element with the draft-eligible players . . . there are elements of that where we were able to reach more people and get them in a moment that was really interesting and, I think, for fans is a great experience.” 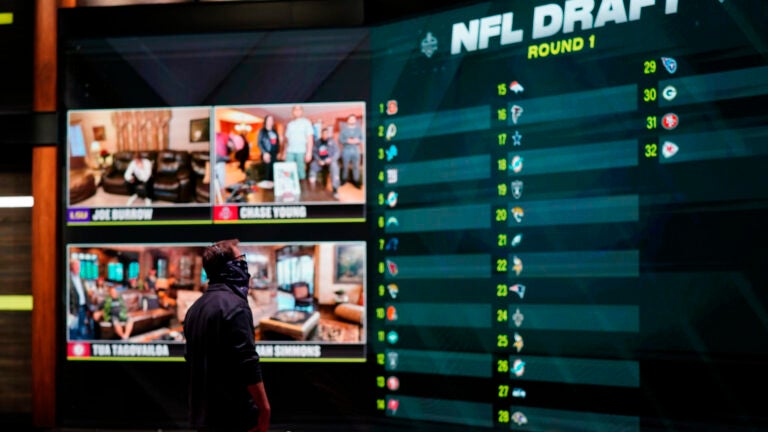