Are the San Francisco 49ers easing their demands when it comes to a potential trade of Jimmy Garoppolo?

San Francisco’s trade with Miami and subsequent leapfrog into the No. 3 overall spot in the NFL Draft looks as if it could be a precursor to landing one of the draft’s top signal-callers. In a pre-draft press conference Monday, coach Kyle Shanahan didn’t say San Francisco would specifically target a quarterback, but added San Francisco would be “fortunate” to have Garoppolo on their roster while adding a rookie quarterback.

However, he stopped short of guaranteeing that the pick and Garoppolo would end up as teammates in 2021.

Shanahan said Garoppolo’s health issues played a role in the team’s decision to move up.

“The biggest thing with Jimmy is his injuries,” he said. “It’s been very tough for us when he’s been hurt, and it’s happened two out of these three years. That’s where it starts. And Jimmy knows that. I’ve been very upfront with him with everything. We’ve been Zooming these last two weeks. [I’m] excited to get him in here coming up, especially when this draft’s over.

“But I feel very fortunate taking a rookie quarterback that we do have a guy like Jimmy. We didn’t sign a guy who’s capable or has the history of being a starter right away, but we have a guy who every time he’s been a starter has played at a high level. So to have that with Jimmy while adding a rookie quarterback gives us a lot of leeway into this.”

If the Niners stick at No. 3 and take a quarterback — Mac Jones, Justin Fields and Trey Lance reportedly have been linked to San Francisco — dealing Garoppolo makes sense if San Francisco is presented with a palatable trade scenario.

General manager John Lynch — who has said the Niners are keeping their options open — said Monday Garoppolo is taking the uncertainty in stride.

“Jimmy’s been a pro,” Lynch said. “He really has. I just spoke to him over the weekend. He’s here. He’s taking part in our virtual meetings, plans on being at the workouts, and Jimmy’s been completely professional as he always has been with us.

”I think the thought is, and I’m sure some might say, ‘OK, if all those things are the case and he’s extremely talented, why are you doing this? Why did you make such a bold move?’ So much goes into that. But Jimmy knows I think one thing we’ve tried to do with all our players — and Jimmy as well — is just be very upfront and honest with what we’re doing and why we’re doing it. My experience as a player, when people do that you can live with that.” 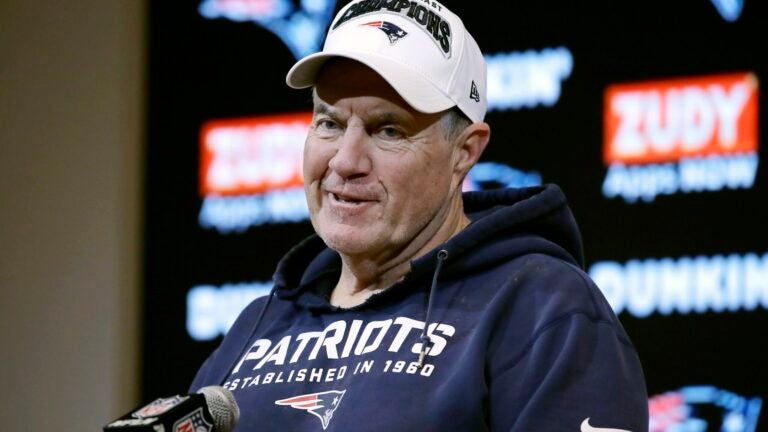 Bill Belichick can’t really pull off a huge surprise in this draft, can he?