Believe it or not, the 2021 NFL Draft won’t end after the Patriots make their first-round selection on Thursday night.

Though most mock drafts forget to mention it, New England could have nine picks still left when the second and third rounds take place on Friday.

The question is: what will Bill Belichick and the Patriots be looking for in the later rounds of the draft?

The answer will largely depend on what the team does Thursday, of course. The team is positioned to potentially fill needs at quarterback, wide receiver, cornerback, or linebacker with premium talent but can only address one at a time.

Here are a few positions and players the Patriots will need to keep an eye on after the first round.

If the Patriots don’t either a) draft a top-five quarterback (whether at No. 15 or with a trade-up) or b) trade for Jimmy Garoppolo, look for Bill Belichick to pivot immediately to the next tier of signal-callers.

Those include options like Stanford’s Davis Mills, whom the Patriots recently have spoken “a long time” with on Zoom, and Florida’s Kyle Trask, another prospect the team has been doing homework on. The team has also reportedly met with Texas A&M’s Kellen Mond, rounding out the list of the obvious second-tier quarterback candidates.

Both Mills and Mond have generated first-round buzz, with some mock drafts projecting New England could trade back into the first round to take one of them if the team misses out on a top prospect early. Trask, on the other hand, seems more likely to be available in the second or third round.

Assuming no Garoppolo trade, the hope is a later-round quarterback would have a chance to sit behind Cam Newton for a full season before getting a shot at the starting job next year. 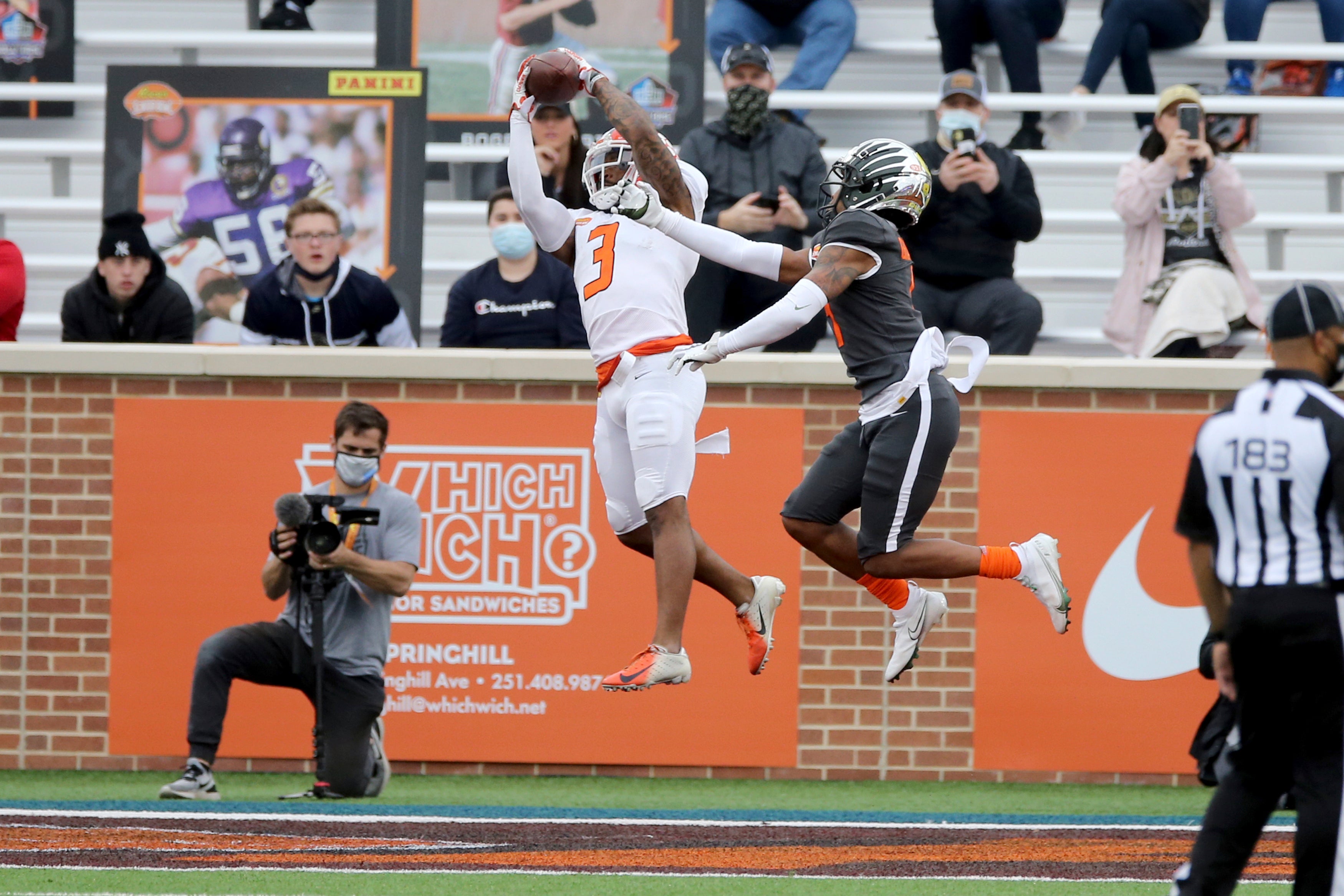 Adding Nelson Agholor and Kendrick Bourne to the receiver room in free agency works from a depth standpoint, but the Patriots’ pass-catching group could still stand to improve.

Clemson’s Amari Rodgers is only one of the first names that comes to mind after the first round who can make that happen.

Highest completion % when targeted since 2018:

He can line up just about anywhere, has a high football IQ – his father, Tee Martin, is the wide receiver coach for the Baltimore Ravens – is a tackle-breaking machine, and can go the distance if he hits the open field.

The undersized but incredibly explosive Rondale Moore of Purdue could fit this profile as well, boasting both 4.2 speed and a hard-nosed mentality with the ball in his hands.

Rondale Moore is a PROBLEM

Where will the dynamic WR land? pic.twitter.com/OsyiFfQrNx

What’s more: the Patriots have met with both Rodgers and Moore pre-draft.

Either could be an excellent replacement for the departing Julian Edelman with their toughness and route-running ability out of the slot. 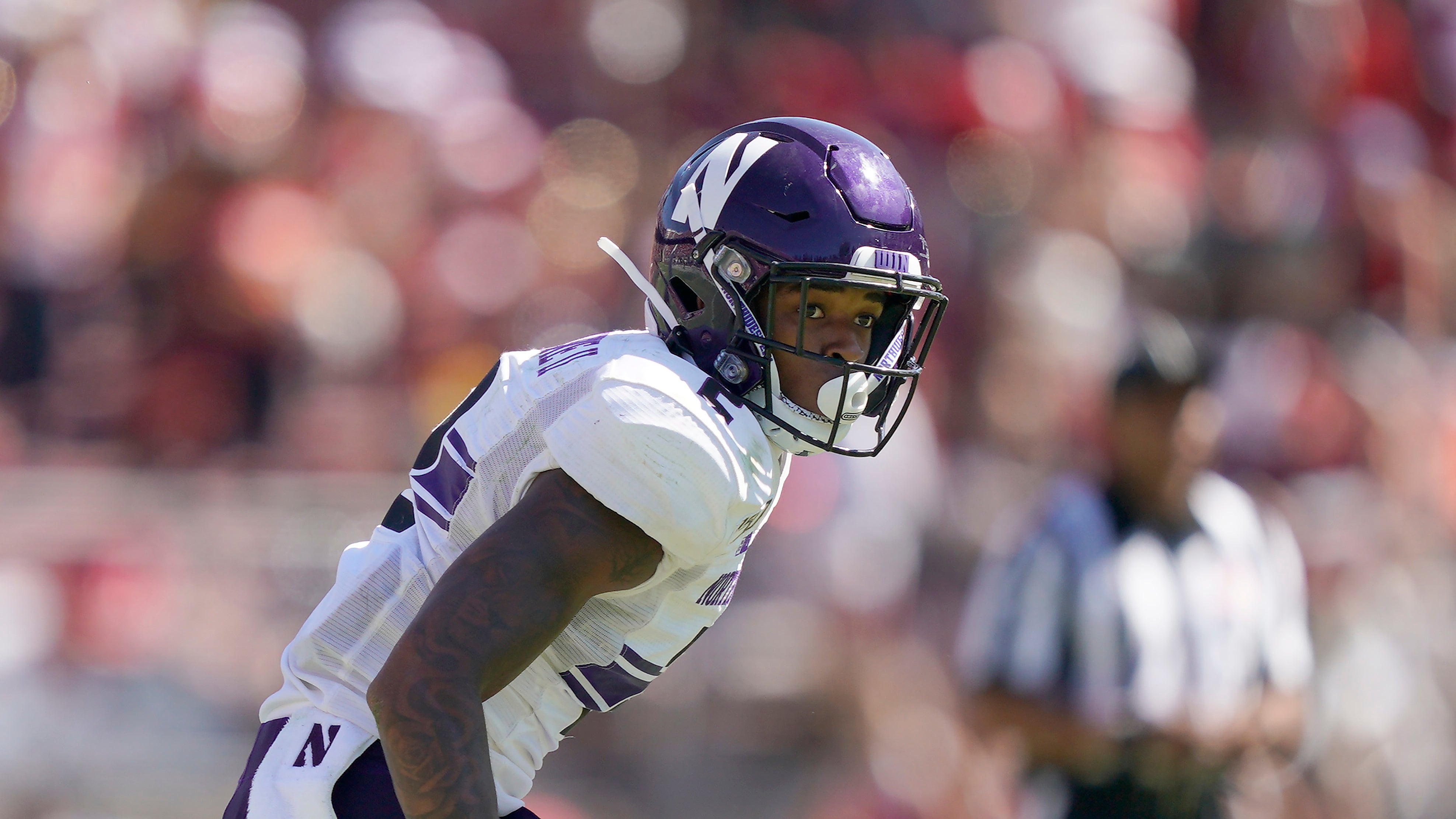 Greg Newsome II in action against Stanford in 2019.

Both Stephon Gilmore and J.C. Jackson are under contract heading into draft weekend. But if a trade up in the draft or for Garoppolo goes down, there’s a nonzero chance one of them could be added to a deal as bait.

In either case, neither is guaranteed to be on the roster after this season, meaning the Patriots need to plan for the future at the position.

One name in particular to watch: Greg Newsome II from Northwestern, a cornerback the Patriots have had pre-draft meetings with.

Newsome has garnered some late first-round attention and might be pushed up draft boards if teams don’t feel good about Virginia Tech’s Caleb Farley. But if he slides a bit further than expected, the Patriots might have a chance to pounce on a long-armed corner who has the ability to play just about any scheme you want, plays the ball well, and has the upside to become a good starter quickly.

If Newsome goes too high for New England, keep an eye on Syracuse’s Ifeatu Melifonwu, who has a second-round grade.

He might need a bit more seasoning before he’s ready to start, but his elite size, length, and athleticism would make him a very enticing, possibly high-reward pick.