The 2021 NFL Draft kicks off Thursday night in Cleveland, and the quarterbacks are again taking center stage. It is expected that the first three players selected will be quarterbacks, and five could be selected in the top half of the draft.

Quarterback is a position of need for the Patriots, and they could certainly be in the mix with their first pick at No. 15, or if they move up. Should they pass on taking a signal caller in the first round, they could still have some intriguing options in the second round, where they own the 46th pick.

Here’s what you need to know ahead of this week’s draft.

Teams have 10 minutes to make a pick in the first round, seven minutes in the second and third, five minutes in rounds three through six, and four minutes for the seventh round.

The draft will take place across three locations in Cleveland: FirstEnergy Stadium, the Rock & Roll Hall of Fame, and the Great Lakes Science Center.

The draft will be broadcast on NFL Network, ABC, ESPN, and ESPN Deportes.

What’s old is new again, as the draft will once again be an in-person event after going virtual in 2020 because of the COVID-19 pandemic.

It will feature a main stage on Lake Erie, where NFL commissioner Roger Goodell will announce picks in person. An outdoor theater will welcome vaccinated, invited guests, including draft ambassadors from each of the 32 teams. Outside FirstEnergy Stadium, fans will be entertained with the NFL Draft Experience.

NFL Network will begin with the NFL Draft Red Carpet Thursday at 6 p.m. from the Rock & Roll Hall of Fame, featuring prospects and select invited guests.

Kings of Leon will perform and Ann Wilson, lead singer for the the band Heart, will sing the national anthem as part of the opening festivities.

Where do the Patriots pick?

The Patriots have 10 picks in the draft, but are typically active with trades over the course of the three-day event. Here’s where they stand as the draft approaches:

By finishing 7-9 in 2020, the Patriots positioned themselves midway through the first round of the draft.

This is a compensatory pick — the highest awarded by the NFL this year — the Patriots received for losing Tom Brady in free agency.

The Patriots had to forfeit their third-round selection as part of the league’s punishment for videotaping the Bengals sidelines during the 2019 season.

This comes via the Texans in return for Marcus Cannon.

This is a compensatory pick.

This is a compensatory pick.

This comes via the Texans in return for Marcus Cannon.

The Patriots received this pick for dealing defensive end Michael Bennett to the Cowboys in 2019.

3. San Francisco (from Houston through Miami)

12. Philadelphia (from San Francisco through Miami)

Here’s the complete order of the 2021 NFL Draft. This page will be updated throughout the draft with the selections.

Clemson quarterback Trevor Lawrence appears to be a lock to be selected by the Jaguars at No. 1. Having shipped Sam Darnold to the Carolina Panthers, the Jets are expected to take Brigham Young’s Zach Wilson with the second pick. The 49ers traded with the Dolphins to move up from No. 12 to No. 3, with reports indicating they want to select Alabama’s Mac Jones.

Ohio State’s Justin Fields and North Dakota State’s Trey Lance are the other two quarterbacks projected to go in the top half of the first round; they may not be available if the Patriots stay at 15.

Teams that are already set under center can look to the wide receiver position, with LSU’s Ja’Marr Chase expected to go high, as well as Alabama’s Devonta Smith and Jaylen Waddle. Florida’s Kyle Pitts is considered to be the top tight end.

Nicole Yang and Jim McBride look at the top quarterback prospects, as well as some of those who will still be hanging around on the second and third days of the draft. You can find a roundup of their stories here.

What if the Patriots don’t pick a quarterback?

The top five quarterbacks could very well be gone by the time the Patriots are on the clock. If they stand pat or do not like what they see of the available quarterbacks when it is their time to pick, they could look to fill another need on their roster.

While they were active in free agency in filling holes, they still need depth, particularly on defense. Ben Volin looks at the other options at No. 15, and writes that the Patriots could wait until Day 2 to select a quarterback.

What the mock drafts say

Here’s what the experts think the Patriots will do with the 15th pick:

· ESPN’s Mel Kiper and Todd McShay: Trade up to No. 7 to select Mac Jones

· The Globe’s Ben Volin also thinks the Patriots will take Lance. You can see his mock draft for the first round here.

Here is a roundup of mock drafts projecting what the Patriots will do in the first round.

0: Number of trades the Patriots made around the 2004 draft. Since Bill Belichick arrived in New England, it’s the only year in which he did not make a draft-related deal.

7: The Patriots have drafted at least one offensive lineman in seven straight drafts (2014-20).

11: Number of quarterbacks the Patriots have drafted during the Belichick era (2000-present), beginning with Tom Brady in the sixth round (199th overall) in 2000.

13: The Patriots drafted two players from Michigan in 2020 — Josh Uche in the second round and Mike Onwenu in the sixth round. It was the 13th time under Bill Belichick that the Patriots selected at least two players from one school in a single draft.

27: Number of times since 2000 the Patriots have traded up in draft-day exchanges.

27: Number of times since 2000 New England has made draft-day trades involving players and/or future draft considerations.

28: Number of times since 2000 the Patriots have traded down in draft-day exchanges.

· This is the Patriots’ highest spot in the draft since 2008, when they selected linebacker Jerod Mayo with the 10th pick.

· They have held the 15th pick just once since 1970, when they were one of six teams to select a quarterback in the first round in 1983 by taking Tony Eason out of Illinois. Hall of Famer Dan Marino was selected by the Miami Dolphins with the 27th pick.

· The 15th selection produced running back Melvin Gordon (Denver) from the 2015 draft, linebacker Ryan Shazier (Pittsburgh) in 2014, center Mike Pouncey (Miami) in 2011 and defensive end Jason Pierre-Paul (NY Giants ) in 2010. Last year, the Broncos took wide receiver Jerry Jeudy out of Alabama with the 15th pick. He started 14 of 16 games played and finished with 52 receptions for 856 yards and three touchdowns. 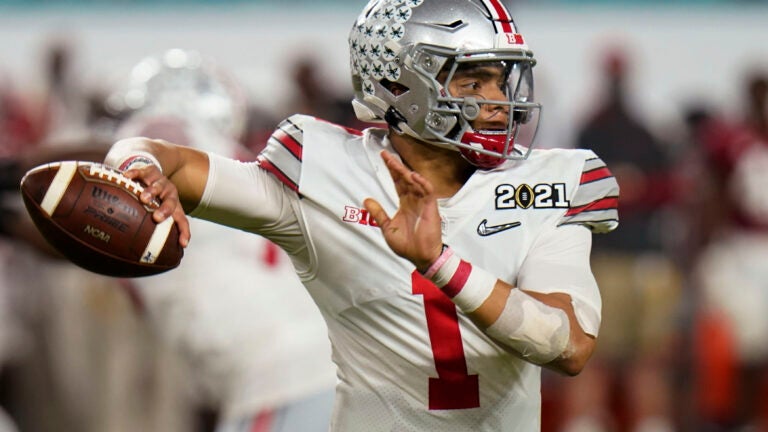