Round 1 of the NFL Draft is in the books, with the New England Patriots addressing one of their most glaring future needs by selecting Alabama quarterback Mac Jones.

But the fun is far from over.

The Patriots go into Day 2 of the draft Friday evening with the 14th pick in the second round (No. 46 overall) and a third-round compensatory pick at No. 96.

Here are some of the best players remaining on the board that the Patriots could hope to target when the second round starts this evening.

The explosive redshirt junior linebacker out of Notre Dame simply flies around the football field. He possesses outstanding quickness and acceleration to track ball carriers from sideline to sideline, then simply explodes into them once he reaches the ball. His massive hits forced five fumbles in his Fighting Irish career.

He has also shown the athleticism to run with tight ends, running backs, and some slot receivers in coverage and the ball skills to make a play (seven career passes defended).

The caveats: he has somewhat of a “tweener” body type at just over 6-foot-1 and 221 pounds, which is undersized for a linebacker. That raises questions as to whether he’s best suited to play safety or linebacker, especially since NFL Network’s Lance Zierlein says Owusu-Koramoah “doesn’t play with linebacker fundamentals yet.”

But his versatility and rare athleticism make him a tantalizing prospect as a defensive chess piece in the increasingly matchup-based NFL. Zierlein’s comp for Owusu-Koramoah: All-Pro safety Derwin James.

There’s a strong chance he’s not available to the Patriots with the 46th overall pick. But he’s exactly the kind of multifaceted talent a Bill Belichick defense would love. Jenkins had possible first-round talent but fell to Day 2 of the draft, which could put him in play for the Patriots at pick No. 46.

He also has the versatility to play both tackle and guard, which New England has typically coveted in its offensive linemen. His size, ability to play multiple positions, and the edge he plays with — Zierlein describes him as “an intolerant run-blocker” bent on burying opponents — piqued the Patriots enough to attend his Pro Day.

For one thing, Jenkins makes sense because, well, you can never have enough quality offensive linemen. But more than that, the Patriots only have recently acquired tackle Trent Brown for this season, meaning the team needs to have a plan at right tackle in place for the future.

The big Cowboys tackle could be the answer to that riddle. Looking purely at Moore’s size and writing him off as just another fast guy who won’t get it done in the NFL would be a mistake.

Flip on the tape, and you’ll see nothing but pure playmaking ability and toughness — something the Patriots’ receiving corps is in the market for with Julian Edelman heading into retirement.

Moore excels in the slot, breaking down corners with crisp routes and doing damage in the middle of the field. He’s also well-known for making courageous catches while taking punishment from linebackers and safeties, which is a must from anyone who makes their living between the hash marks.

Elijah Moore is a smooth route runner. Here’s a double move vs. Alabama and notice the catch through contact. Some knock him for size, but he’s a tough player. #Titans pic.twitter.com/mWJPfv8OxY

In addition to reportedly running a 4.34 40-yard dash at his Pro Day and being a problem after the catch, “He has soft, sure hands and above-average ball skills with a great feel for spatial awareness to hit the sweet spots when working against zone,” writes Zierlein in Moore’s NFL.com profile.

Even better, he proved he could do it against the best defenses college had to offer, racking up 11 catches for 143 yards on Alabama and handing 227 yards on No. 5 Florida.

His below-average size shouldn’t stop him from finding his way onto the field early for the Patriots — who love small, quick receivers. No, you’re not the only one who feels old thinking about former Patriot Asante Samuel’s son playing in the NFL.

The younger Samuel isn’t necessarily as heralded a prospect as his father was, but some of the traits he plays with — especially his instincts in off-coverage — are very familiar.

I don’t care how tall he is. Asante Samuel Jr. can ball. pic.twitter.com/pZUWSBbpeA

Samuel Jr. posted 29 total passes defended in his college career — including 14 as a true sophomore in 2019 — aggressively attacking the ball at the point of the catch. His lack of great size can be a liability against bigger receivers, and he has a tendency to commit one too many penalties down the field.

But his ball skills could be a very welcome addition to a club that might lose one (or both) of its best two cornerbacks by the end of next season as Stephon Gilmore and J.C. Jackson hit free agency. He also shows a willingness to play hard on special teams, which can only help his case with the Patriots. 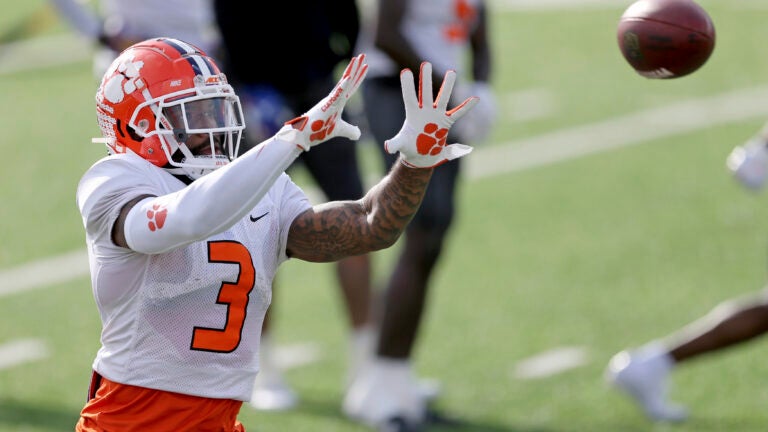