When his moment came Saturday afternoon, as the former Duke tight end went 162nd overall to the Kansas City Chiefs, he gave a shout-out to the folks of Central Massachusetts and beyond.

“Coming from Massachusetts, it’s a very hard-work mentality,” Gray said. “You always play with a chip on your shoulder, and that’s the mentality that all of us from that area have had throughout our high school and college careers. I’m definitely looking forward to continuing the hard work and the dedication that it takes.”

The 6-foot-3, 240-pound target was a 2019 second-team All-ACC choice and 2021 Senior Bowl selection. He ranked second in the ACC in catches and yards among tight ends this past season and finished fourth in program history for most career touchdown receptions at the position.

Duke coach David Cutcliffe praised him for his dependability and work ethic.

“I’ve never seen Noah take a rep off or a day off, and his teammates would all tell you that,” Cutcliffe said. “Noah doesn’t say a whole lot, doesn’t have to. He’s inspirational. He’s very talented.”

Gray is excited by the Chiefs’ versatility, and he said he prides himself on being able to line up at several positions. He’s also grateful to join one of the league’s most explosive offenses and learn from star TE Travis Kelce, among others.

“I’m extremely excited,” Gray said. “It’s not every day that you get to learn from one of the best tight ends in the league. It’s truly an honor. I’m excited to get there and be a sponge.”

He said he spoke with members of the Chiefs multiple times before the draft, and he thought those conversations went well. Gray said he’s grateful to start year 22 in style after celebrating his birthday Friday.

“It’s just a blessing to be where I’m at right now,” he said.

Dillon, who turned in a strong rookie season for the Packers, welcomed McDuffie to his new home on Twitter.

McDuffie, a 6-foot-1, 227-pound Buffalo native, led the Eagles and finished fifth in the nation with 107 tackles in 2020. He was the 220th pick and was also coincidentally the 220th player in BC history to be selected in the NFL or AFL Draft.

“He was such a productive player in our defense and we look forward to watching him play on Sundays with the Packers,” Boston College coach Jeff Hafley said.

Larnel Coleman, OT, UMass: The 6-foot-7, 307-pound Malden native and former St. Clement catalyst told the Globe before the Draft that he’s always viewed himself as an underdog.

“That’s always been how I’ve looked at myself,” Coleman said. “It always keeps me humble, keeps me hungry, and keeps me grinding each and every day.”

The underdog is now heading to the NFL, as the Miami Dolphins selected Coleman in the seventh round with pick No. 231 on Saturday.

Coleman was named to the Outland Trophy Watch List, which features the top interior linemen in the FBS, as a redshirt senior this past season at UMass.

Jason Pinnock, CB, Pittsburgh: The 6-foot, 205-pound corner went 175th overall, in the fifth round, to the New York Jets.

Pinnock graduated from Windsor High School in Connecticut, where he was named the Hartford Courant Defensive Player of the Year as a senior.

He started all 10 games for the Panthers this past season, picking off three passes and breaking up five. Pinnock played at least 10 games every season of his four-year college career.

Pinnock said he’s familiar with the Jets’ history. He’s met former star Darrelle Revis a few times and said he’s been a fan of the team since Revis played.

During his Zoom with reporters, from a bowling alley in Connecticut, his brother poured champagne on him to celebrate.

The Ravens chose the 6-foot-3, 254-pound Newtown, Conn., native 184th overall Saturday. He earned the “Toughest Player” award twice at Michigan and in 2018 became the first player since Denard Robinson in 2011 to score three touchdowns in the first half of a game.

“My mental process is I’m the baddest dude on the field at all times, and I’m going to play like that and think like that,” Mason said. 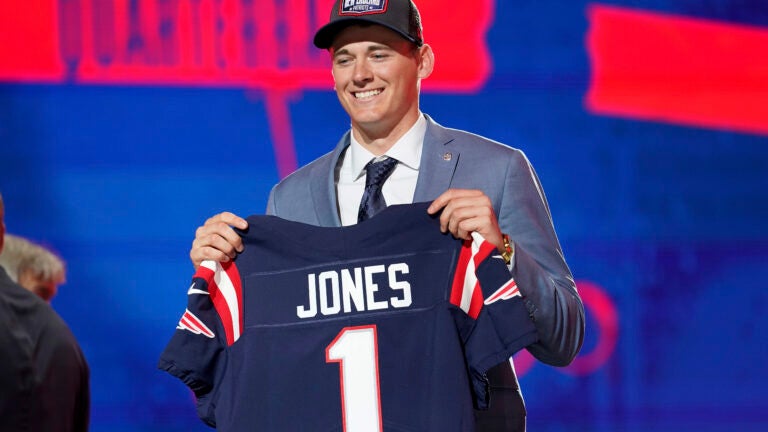