Odell Beckham Jr. used Twitter on Monday night to unload on the New York Giants, ripping the general manager of his former team, defending himself against the notion that he was a team “cancer” and saying that he had “begged” Coach Pat Shurmur to be allowed to be on the sideline during home games.

“Im not playin shotsss are fired!!!” he tweeted as the tirade drew to a close.

He wasn’t kidding about that. Beckham, who was traded to the Cleveland Browns in March for the Browns’ Nos. 17 and 95 overall picks and Jabrill Peppers, reiterated that he was happy to have landed in The Land while dissing Giants General Manager Dave Gettleman over how his five years in New York ended.

“Im not upset in ANY way about where I landed,” he tweeted. “But outta respect what they did, was crazy! And beyond disrespectful ! I wanted nothin but the best for NY. But on to a new chapter . . .. ITS LIFE”

The wide receiver’s outburst came a day after Gettleman told NJ.com about what he said was the Giants’ former culture problem. Blazing talent, according to Gettleman, isn’t enough. “There is a cultural thing to it that’s critical,” he said. “I have not been on a team that’s gone to a Super Bowl that’s had a culture problem.” And, he was asked, did he have one with the Giants? “Not anymore,” he said with a smile.

Clearly, that got under Beckham’s skin.

“We didn’t sign him to trade him . . .” you don’t get married to get a divorce,” Beckham tweeted, referring to the Giants’ decision to sign him to a huge contract extension months before trading him. ” . . . I tried my best, the situation I had been in since I got there never changed . . . we were still losing. PERIOD . . . money doesn’t bring happiness brotha . . . remember that”

Calling the give-and-take “almost a therapy session,” Beckham said he wasn’t trying to be negative. When one user tweeted that he was a cancer, Beckham answered in self-defense:, “Ask any one of my teammates of who I was as a teammate and a man and a person. Yes I’m cancer to a place that’s ok wit[h] losing because I want to win that BADDDD. Ur absolutely correct!”

Beckham had drawn some criticism for not being on the sideline when he was out with a quadriceps injury for the final four games last season.

“Ask the coach,” Beckham wrote, referring to the cool relationship he had with Shurmur. “I beggged him to go to each and every one of those games actually for my team(mates) and to be on the sideline for the home games . . . he told me “No”,,,, anything else sir. (That’s to whoever tweeted askin why I didn’t travel while I was hurt. . ..) next.”

Ask the coach …. I beggged him to go to each and every one of those games actually for my teamatws and to be on the sideline for the home games… he told me “No”…. anything else sir. (That’s to whoever tweeted askin why I didn’t travel while I was hurt….) next

Beckham fired another shot, telling a user who noted that Gettleman had been “disrespectful” to him that he has dirt on the team.

“I gave them everything I had (every) Sunday. Just put some respect on my name that’s all I’m sayin!” Beckham wrote. “I ain’t sayin nothin, (and) trust me I got a LOTTTTT of info that people don’t kno(w) about so, so keep my name outcha mouth the way I do yalls! Ya diggg.”

Since the trade, Beckham has said he’s happy about getting a “fresh start,” especially with his friend Jarvis Landry on the Browns’ roster. Beckham asked Twitter users for restaurant recommendations in Cleveland and wrote that he was looking forward to “a new beginning . . . and media that isn’t gonna have or look for a story of a sneeze or blow my nose wrong ! Im lookin forward to what God has in store for me!! I’m lookin for to Jarvis Landry and a fresh start.

What u don’t understand !!!!!! I’ve never been in a place so happy in my life, my soul, my spirit, is at an all time high!! Say what u want, there is NOOOO bringin me down .. PERIOD

“And if I hold my tongue about it I’ll be crucified . . . It’s not about explaining, sometimes they just need to kno the truth. Regardless u say something then I’ve said to much. If I don’t say somethin then I’m hiding something. Lol either way it’s a lose lose for me, soooo . . . let the truth out my guy”

Beckham promised that the trade had energized him. “Cleveland is my home now. Trust me I’m comin wit a bag fulll of energy, I want to win. Period. Im right where God wanted me to be. Let’s have some fun!”

Cleveland is my home now. Trust me I’m comin wit a bag fulll of energy, I want to win. Period. Im right where God wanted me to be. Let’s have some fun! 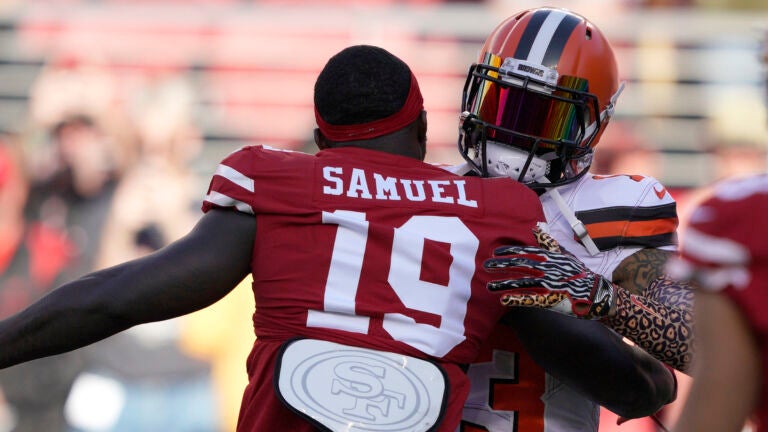