Free agent wide receiver Antonio Brown is scheduled to meet with NFL investigators next week, according to a person familiar with the situation.

The meeting between Brown and league representatives is to take place next Thursday, according to that person, who spoke on the condition of anonymity because the NFL has made no formal announcement about the interview.

The league is “not even close” to making a ruling about Brown’s playing status, according to that person, who added that NFL investigators are likely to have to follow up on statements made by Brown and perhaps will have further interviews with other witnesses.

The NFL declined to comment through a spokesman. Next week’s meeting was first reported by ESPN.

Brown said in a social media post Thursday that he’s being treated unfairly by the league, but later reversed course in another public message.

“Imagine conforming to a system giving it a 100 percent to see them treat me like this . . . unfairly!” Brown initially wrote on Twitter. “Making money off my sweat and blood.”

Brown also used profanities to write that he will “never play” in the NFL. He wrote that the league “treat[s] black people the worse!” and said he is seeking to “[c]lear my name.”

By Thursday afternoon, Brown had walked back his earlier comments.

“I’m just very frustrated right now with the false allegations and slander to my name,” he tweeted. “I love football and I miss it. I just want to play and I’m very emotional about that. I’m determined to make my way back to the NFL asap[.]”

The league has been investigating allegations of rape, sexual assault and sending threatening text messages made against Brown by two women. He faces possible disciplinary action by the NFL under its personal conduct policy.

The league also said when Brown was released by the New England Patriots in September that it would consider putting him on paid administrative leave via placement on the commissioner’s exempt list if he’s signed by a team. If he’s on that list, Brown would be paid by his team but would be ineligible to participate in practices or attend games.

That list is designed to be used until the NFL makes a decision about a possible suspension without pay under the personal conduct policy. There has been speculation that several teams would be interested in signing Brown once his playing status is resolved.

He was accused of rape and sexual assault in a lawsuit by a former college classmate who worked for him as a trainer, Britney Taylor. Brown denied the allegations through his attorney and has not been charged with a crime.

Another woman accused Brown of sending threatening text messages to her. That woman said Brown hired her to paint a mural in his home but cut off contact with her after she ignored his unwanted sexual advance.

Brown played in one game for the Patriots, who signed him after he was released by the Oakland Raiders. The Raiders obtained Brown in an offseason trade with the Pittsburgh Steelers but released him, at Brown’s request, just before the season after a series of incidents.

He missed time because of injuries to his feet sustained while undergoing cryotherapy treatments and while pursuing two failed grievances against the NFL seeking to be permitted to wear a helmet not up to the league’s safety standards. He was also fined by the Raiders for a practice-field verbal confrontation with General Manager Mike Mayock.

Brown has filed grievances attempting to force the Raiders and Patriots to make nearly $40 million in payments to him, withheld by the teams based on his conduct, under the terms of his contracts. 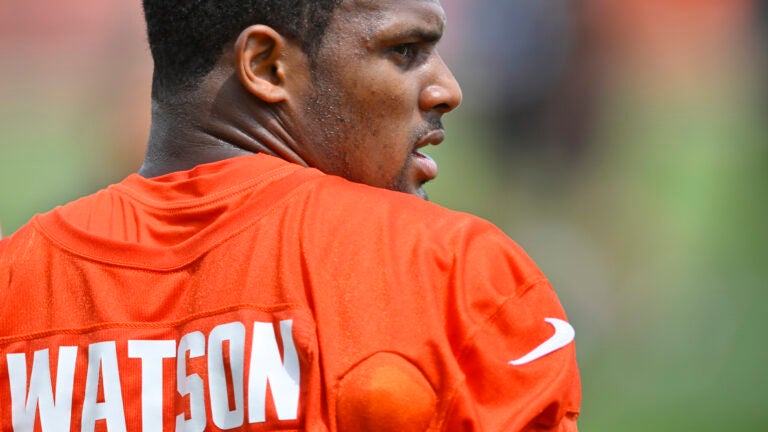