Not for Tom Brady, and certainly not for the Patriots.

And it shouldn’t end like this for Julian Edelman, either.

The story of Tom Brady isn’t complete without his trusty slot receiver from Kent State, who rose from a seventh-round draft pick to one of the greatest wide receivers in franchise history.

And the story of Julian Edelman isn’t complete without his best friend, Brady, who also happens to be the guy throwing him the ball.

Like Edelman, Brady rose from being an afterthought draft pick (No. 199 overall, and don’t you forget it) to his current status as a quarterback many consider to be the greatest of all-time. It’s this shared underdog, chip-on-your-shoulder mentality that has helped these two California boys grow so close and accomplish so much together on the field.

Who can forget the go-ahead touchdown catch in Super Bowl XLIX against the Seahawks to put the Patriots up 28-24 with two minutes to go? Or the miraculous fingertips grab late in Super Bowl LI against the Falcons to keep the comeback bid alive?

The memories these two have forged are endless; their bond, unbreakable.

Because of their closely intertwined careers, one can’t help but wonder what the future holds for Edelman and the Patriots.

After recovering from an ACL tear suffered in the 2017 preseason, Edelman rebounded well in the ensuing two seasons, catching 174 balls combined in 2018 and 2019 for 1,967 yards total, to go along with 12 touchdowns.

There’s no denying Edelman’s value to New England. Last season alone, he was sixth in the league in both targets per game and receptions per game, and he averaged 70 receiving yards per game, good for 20th in the league. Edelman continues to produce at a high rate, despite being 33 years old with a list of injuries that isn’t getting shorter, having dealt with a myriad of injuries this season that included a separated AC joint in his shoulder, a knee injury, and a rib injury, according to Jeff Howe of The Athletic.

Edelman, who will turn 34 in May, is on the back nine of his career. Time is of the essence for the squirrelly receiver, and with the future of the Patriots up in the air, after Brady left to sign with the Tampa Bay Buccaneers in free agency, it may be in both parties’ best interest to explore a trade. The Buccaneers, who are flush with cap space, could be an option.

The Bucs could use a slot receiver like Edelman to complement their dynamic receiver duo in Mike Evans and Chris Godwin. Adding Edelman would improve their chances at a title and give Brady back his security blanket, something that will be especially important as he transitions into a new team.

From the Patriots perspective, does a trade make sense?

Edelman is signed through the 2021 season with a cap hit of $9.67 million, according to Miguel Benzan of PatsCap. Trading him would create $3.6 million in cap space, something that the Patriots are short on right now, in large part due to the $13.5 million cap hit they incurred after Brady’s departure.

New England trading Edelman would be a big blow to a receiving corps that is already thin as is. N’Keal Harry, coming off a shaky, injury-plagued rookie season, would be thrust into a more prominent role, and Mohamed Sanu, who had offseason ankle surgery, would also be expected to produce more than he did in the second half of last season. A trade of Edelman would raise even more question marks for a team that is going through the most roster turnover it has experienced since 2012. The short-term impact of a trade would be a tough blow.

Coach Bill Belichick has always shown a willingness to part with a player two years too early rather than two years too late (see: Brady, Tom). The track record for 34-year-old receivers with injury-riddled careers is not great. That Edelman, at 33, put up 100 catches for 1,117 yards in 2019 while dealing with several significant injuries is impressive as is. It would be a lot to ask of Edelman to produce at that same level next year with more tread on his tires and a new signal-caller under center.

So, what would it take to convince the Patriots to part with their best receiver, and one of the emotional leaders of the team, in a season where leadership will be at a premium as the team embarks on a new era?

The Patriots would likely struggle to get anything higher than a fifth-round pick back in exchange for Edelman. Despite his value to the Patriots, giving up anything more than a late-round pick would be ill-advised for another team. But would the Buccaneers, who have two fourth-round picks in this year’s draft, be willing to pay a premium to reunite their new quarterback with his favorite pass-catching target? It’s possible.

If the Patriots could acquire pick No. 139 in the fourth round from the Bucs in exchange for Edelman, that would be compensation that would have to make Belichick & Co. think a little bit, especially considering the financial relief that would accompany a trade.

It won’t be an easy decision. None of these decisions are at this time of the year. But trading Edelman would help both team and player, and it appears Edelman has already begun entertaining the possibility of a reunion in Tampa Bay with his quarterback. 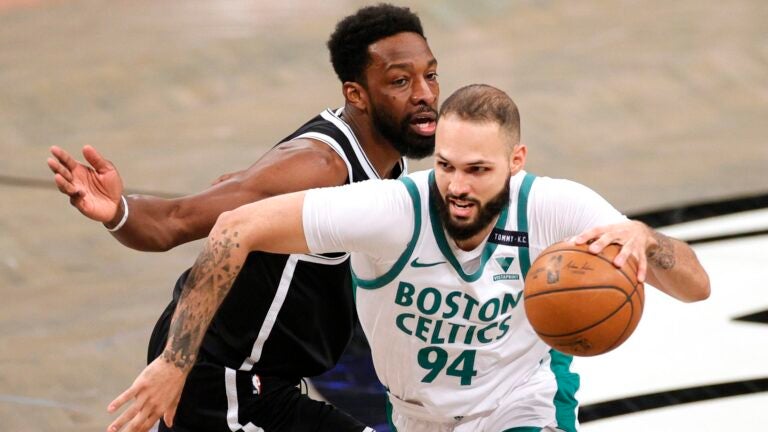