The Celtics lost Game 6 of the Eastern Conference semifinals in double overtime against the Raptors 125-122 on Thursday.

Marcus Smart posted a triple-double and Jaylen Brown once again led Boston with 31 points, but it wasn’t enough to overcome Toronto. Game 7 tips off at 9 p.m. on Friday night.

And the Red Sox are back this evening, facing the Rays at 6:40 p.m at Tropicana Field.

Sean Payton on TB12: Ahead of the Saints’ Week 1 clash with the Buccaneers, New Orleans coach Sean Payton was asked about Tom Brady. Along with praising Brady’s longevity and storied career, Payton referenced the former Patriot’s TB12 products.

“Tom’s got that whole TB12 line, and he had me buying the water in the offseason, and it was fantastic,” Payton told reporters on Wednesday.

Still, Payton maintains that Brady has injected a degree of gamesmanship in how his company treats the rival NFC South coach.

“Only [problem] is, the emails don’t stop coming,” Payton added. “And I told him, ‘Hey, can you stop sending me emails?’ And then he purposely went to the company and now they’re doubled. Every morning I wake up, I’m gonna erase about 15, maybe 12 emails.”

Brady will make his Buccaneers debut on Sunday in New Orleans against the Saints at 4:25 p.m.

Trivia: The Revolution recently re-acquired attacking midfielder Lee Ngyuen, who ranks second all-time in assists with the club. What player has the most assists in Revolution history?

Hint: He was the first ever MLS Rookie of the Year in 1996 playing for the Tampa Bay Mutiny.

Joe Kelly’s face mocking the Astros has become a Los Angeles mural: Artist Jonas Never painted the mural of Kelly’s now famous expression to Carlos Correa on the side of Floyd’s 99 Barbershop less than two miles from Dodger Stadium.

New wall for the legend that is Joe Kelly… wanted to make sure I got it done before the Astros come to town next week. It’s on the @Floyds99 in Silver Lake on Sunset & Parkman pic.twitter.com/38GeXKrdWe

Aqib Talib announced his retirement along with a few hilarious anecdotes: But also, just be aware that he uses some profanity in this video.

Much love to everybody who played a part in my career. Sorry I couldn’t join you in New England Bill! You’re welcome to come on the show! ⁣
⁣
Get the full details with the link in my bio and follow @calltothebooth for more. pic.twitter.com/cuUuQVkzQm

On this day: In 1999, Pedro Martinez allowed a solo home run to Chili Davis, but yielded nothing else to the Yankees.

By the time it was over, the Boston ace had piled up 17 strikeouts facing just 28 batters in a masterful performance as the Red Sox won 3-1.

Daily highlight: The Celtics lost, but this block from Jayson Tatum is still a quality rewatch. 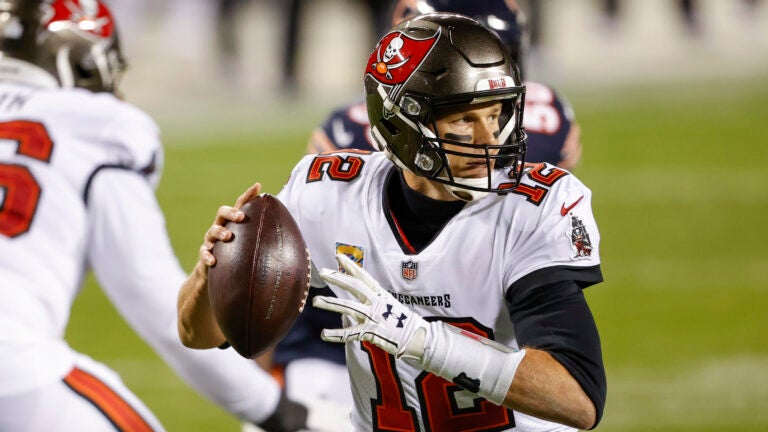 Tom Brady admitted he was 'confused' on 4th down against Bears