On Sunday, the Broncos defeated the Patriots, 18-12. New England committed three turnovers and played like a team that had only been able to practice twice in two weeks due to multiple positive COVID-19 tests.

The Dodgers completed a National League Championship Series comeback, defeating the Braves 4-3 on Sunday night to advance to the World Series after trailing earlier three games to one.

Los Angeles and the Tampa Bay Rays begin the World Series on Tuesday in Game 1 at 8:09 p.m. ET.

And tonight, the Revolution face the Philadelphia Union at Gillette Stadium in a pivotal matchup as the two Eastern Conference teams jockey for playoff position with only a few games left in the MLS regular season.

A final piece of breaking news on Monday is that legendary 74-year-0ld hockey announcer Mike “Doc” Emrick is reportedly retiring after a decades-long career.

Mike Vrabel appeared to be up to some trickery once again: When Titans coach Mike Vrabel employed some of Bill Belichick’s own trickery against him in the playoffs last season, the one-time Patriots edge rusher admitted that he enjoyed the moment.

On Sunday, amid a desperate back-and-forth battle with the Texans, Vrabel seemed to use another trick to help save his team in the fourth quarter.

Trailing 30-29 with 3:49 left in the game, the Titans needed to stop the Texans from killing off the remaining time in the game. Houston was in the process of successfully running the ball to run down the clock.

Facing a 2nd and 1 at the Titans’ 25-yard line, Houston looked set to secure another first down, and several more opportunities to waste time.

What happened next was possibly a piece of clever manipulation from Vrabel.

Cornerback Joshua Kalu, who played only three defensive snaps on Sunday, was sent into the game. The move was inexplicable on the surface, since it gave Tennessee 12 players on the field (which is a penalty).

In video captured by the CBS broadcast, Vrabel appeared to be waving off the concerns of cornerback Jonathan Joseph, who noticed that the Titans had too many players on the field. Vrabel then seemed to point it out to the referee standing next to him.

By intentionally taking a penalty, the Titans gave the Texans a first down inside the 20-yard line. As Broadway Sports’ Mike Herndon pointed out, this accomplished two things.

First, it stopped the clock when the Texans accepted the penalty (which interim head coach Romeo Crennel did). And second, it gave Houston the ball inside the 20-yard line, which reduced the number of additional first downs the Texans could get, therefore reducing the amount of possible time that could be wasted.

The result was that, because of the downs and distance, Tennessee gained either an additional 40 seconds or an extra timeout.

While the Texans still scored on the drive to take a 36-29 lead (missing a two-point conversion), the Titans got the ball back and scored a touchdown to tie it up with only four seconds remaining. While Vrabel wasn’t asked about if he did the move intentionally in the postgame press conference, the time-saving move clearly preserved precious seconds that Tennessee converted into points.

Trivia: The last Jets playoff game was a 24-19 loss to the Steelers in the AFC Championship at the end of the 2010 season. Who led the Jets in rushing during that game?

Mookie Betts took another home run away with a tremendous catch: The Dodgers won the game — and the pennant — thanks in part to Betts keeping it 3-2 in the top of the 5th.

MOOKIE DID IT AGAIN. pic.twitter.com/TmqRo6n3vG

Derrick Henry chalked up 94 of his 212 rushing yards on this play: Henry eventually scored the winning touchdown in overtime of a wild Titans victory over the Texans.

After Atlanta lost the NLCS, Twitter jokes referencing Super Bowl LI were back:

It has been a rough few years for Georgia sports… pic.twitter.com/Qiv6D6Tds7

On this day: In 2003, with time running out in the first half of a Vikings-Broncos game, Randy Moss caught Daunte Culpepper’s deep pass short of the end zone. It appeared Moss would be tackled and the Vikings would use their final timeout to have a chance at a field goal.

Instead, Moss — as he was being tackled — intuitively lateraled the ball over his head to running back Moe Williams, who sprinted for a touchdown. Minnesota ended up winning the game, 28-20.

Who remembers that one time @RandyMoss didn’t score…
But STILL scored? 😱😱😱 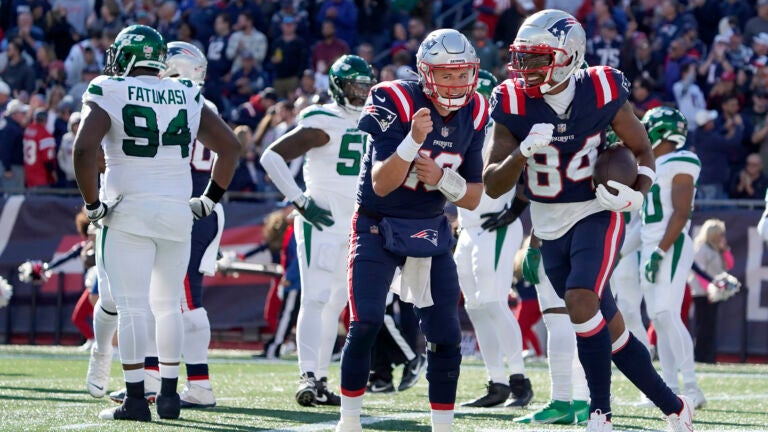 Watch: Bill Belichick addresses the Patriots after win over Jets