Peter King said he should have realized back in January that Tom Brady was leaving New England.

The longtime Sports Illustrated columnist and current NBC Sports writer King, speaking on “Slow News Day” with The Ringer’s Kevin Clark, referenced a 10-minute conversation he had with the quarterback after the Patriots lost to the Tennessee Titans in the AFC Wild Card round last season. King said Brady seemed particularly “despondent” – even more so than he typically would have been after a deflating playoff loss.

“If I had been smart, which I wasn’t, I would have come out of that room and said, ‘I do not think Tom Brady is going to be back with the Patriots,'” King told Clark in a video that was released Tuesday.

King said Brady’s mood seemed different, as though he realized it was likely the end of his time there.

“Now, when I look back and try to reconstruct those 10 minutes, the one thing that I can’t help but think is that he knew, for a quarterback, New England was hopeless,” King said.

King – who starts talking about the Patriots at the 1:35-mark in the YouTube video below – said that there “isn’t even close” to a player opposing defenses have to game plan against on the Patriots. N’Keal Harry hasn’t developed yet, Julian Edelman is getting older and was never one to take the top off a defense to begin with, and Phillip Dorsett and Mohamed Sanu didn’t stick.

He said he doesn’t think there’s any hope for the Patriots this year, and he sees them continuing to struggle.

Said King: “It’s incredible to me that Bill Belichick is so smart about football, and yet he decided to solve their offensive problems this year by drafting two tight ends in the third round.” 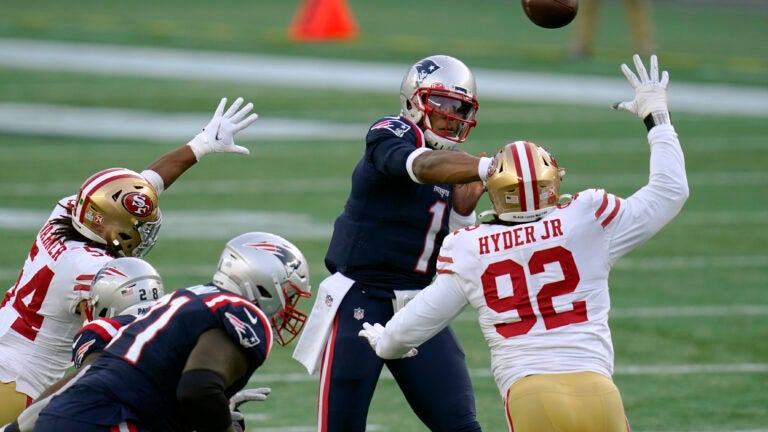