“I didn’t think that I did nearly a good enough job for our football team to give us a chance to be crowned world champs,” McVay said Tuesday.

McVay and the Rams will get another crack at the Patriots this Thursday, at 8:20 p.m. EST at SoFi Stadium, in a game both McVay and Patriots head coach Bill Belichick agree is a totally fresh and distinct matchup.

“There’s a lot of football that’s been played since then,” Belichick said Tuesday. “I think the more recent games have more relevance, certainly the players do. There’s a lot of players that played in that game that aren’t going to play in this one.”

The Patriots (6-6) have won four of five and the Rams (8-4) three of four, and both are coming off quick turnarounds after playing Sunday. New England is trying to bolster its playoff odds, while Los Angeles is hoping to move to 5-1 at home and maintain its perch atop the NFC West.

Jared Goff has been up and down this season.

Following the Rams’ 23-20 loss to the San Francisco 49ers in Week 12 – in which quarterback Jared Goff threw two interceptions, finished with under 200 passing yards, and posted a quarterback rating of 9.5 – McVay was was blunt in his assessment of the performance.

“Our quarterback has to take better care of the football,” McVay told reporters.

That brought Goff’s turnover total to 10 in four games – six interceptions and four fumbles – and one frustrating loss illuminated a larger trend that previously wasn’t getting much attention because the Rams were winning.

As he’s done regularly throughout his career, though, Goff bounced back with a strong outing and showed why he was the No. 1 pick in 2016. On Sunday, in a 38-28 win against the Arizona Cardinals, Goff finished 37-for-47 with 351 passing yards, a touchdown in the air and on the ground, and no turnovers.

“The one thing I wasn’t worried about was him being overwhelmed by having a tough outing and being able to respond,” McVay said.

Three throws from Jared Goff in a bit of a redemptive performance.

*Working progressions out of empty and staying on-time
*Crosser variations and throwing on the move
*Placement against tight coverage pic.twitter.com/rc9iBftAtw

He’s thrown the ball 30 or more times in every game but one this season, and he attempted a whopping 61 passes in a loss to the Miami Dolphins. Even if he turns the ball over, or struggles with accuracy, don’t expect his confidence or involvement to dip.

Cam Akers has emerged as a key contributor.

Rookie running back Cam Akers is establishing himself as a catalyst in the Rams’ offense.

Akers, a second-round pick from Florida State, carried the ball 21 times for 72 yards and a touchdown in the win over the Cardinals. He’s reached the end zone each of the past three weeks and is becoming more and more involved alongside fellow running backs Darrell Henderson Jr. and Malcolm Brown.

“He just continues to take great leaps,” Goff said of Akers. “Early on in the year – we have a lot of faith in everyone, but Darrell and Malcolm were just a step ahead a little bit and understanding what we were trying to do on each play, and at this point Cam is right there with them.”

Cam Akers carries a defender in the end zone 😮

McVay called him “a really physical player that’s got explosion.”

Akers – who is emerging as a trendy player to pick up for fantasy football playoff runs – acknowledged that getting more carries of late has helped him find a rhythm. He said he has “supreme confidence” in himself to make plays.

“It’s all a mindset thing,” Akers told reporters. “If you don’t got the mindset to be a dog, then the dog plays won’t come to you.”

Akers didn’t practice during Monday’s walkthrough, due to a shoulder injury, and his status for Thursday’s game is up in the air at this point.

The Rams are third in the NFL in total offense, at 395.3 yards per game, so Belichick knows his defense will be in for a challenge.

“They mix in a lot of the concepts that are difficult on the defense – their plays, their tempo, they obviously have a lot of good players,” Belichick said. “So, yeah, it’s a combination of all those. They put a lot of pressure on the defense.”

Aaron Donald and Jalen Ramsey are elite playmakers on defense.

One main reason why is the consistent dominance of former first-round pick Aaron Donald. Donald, a defensive tackle, is second in the NFL in sacks (11) and tied for second with four forced fumbles.

“He’ll wreck a game and there’s no play that he’s not a factor on,” Belichick said. “He’s right in the middle of the defense. You can’t really get away from him on any run or pass play. You’ve got to deal with him blocking on every play. He’s definitely a major factor in the game.”

Patriots coach Bill Belichick on Aaron Donald and Jalen Ramsey: “They can and do ruin games.”

Patriots cornerback Stephon Gilmore said he could tell right away that Ramsey was going to be a special player.

“I’m happy for him, him being in L.A. now, him having the success he’s having,” Gilmore said. “He’s one of those athletic guys that can do it all – plays physical, he can run, can cover anybody, athletic. I think he’s going to have a great, long career if he keeps working.”

A week after Gunner Olszewski returned a punt 70 yards for a touchdown and another 61 yards against the Chargers, the Patriots will be up against one of the top punters in the league in Johnny Hekker.

He booted the longest punt in Super Bowl history (65 yards) against the Patriots in 2019 and helped keep the Rams in the game.

Belichick, in the past, has called Hekker “dangerous” and someone who excels at his position.

“Hekker is a tremendous weapon,” Belichick said. “I mean, this guy is as good a player as I’ve ever seen at that position.”

Hekker is currently first in the NFL with 25 punts inside the 20-yard line. Earlier this season, against the Chicago Bears, he became the first punter in the last 30 years to punt five-plus times in a game and pin the opponent on or inside the 10-yard line every time.

Johnny Hekker of the @RamsNFL is the only NFL punter in the last 30 years to punt 5+ times in a game and pin the opponent to their 10-yard line or inside on every one of them.

The Patriots – who have a proven punter of their own in Jake Bailey – have generated momentum through special teams of late, but it may be more difficult to do so against Hekker and Co.

Visit Patriots lose their leading tackler to an arm injury in playoff game vs. Bills 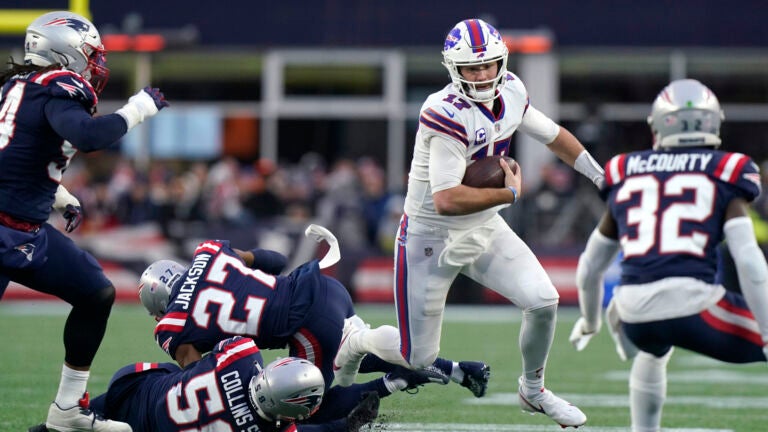