Tom Brady guided the Tampa Bay Buccaneers to a 31-23 win over the Washington Football Team in his first playoff game not with the Patriots, earning a date with Drew Brees and the New Orleans Saints in the NFC divisional round.

Brady wore a microphone during his 381-yard performance Saturday and is shown interacting with Antonio Brown, Chase Young, Alex Smith, and many more.

The video starts with Brady dapping up his offense linemen before the game and preaching the importance of communicating well throughout the night. He then strolls over to head coach Bruce Arians and wishes him good luck before heading over to his pass-catchers.

“Decisive all night, all right,” Brady tells them. “Great communication, great poise, man. Got a lot of football, all right. Sixty f****** minutes of our best.”

Once the game is underway, Washington’s rookie defensive end Young approaches Brady and and tells him he wants to shake his hand. He makes sure Brady knows that it’s all respect from Young’s end, and Brady indicates that it’s mutual. Young screamed “Tom Brady, I’m coming!” while galloping off the field after Washington’s final regular-season game, but he was held to three tackles Saturday night.

Following his touchdown pass to Antonio Brown in the first quarter, Brady asks Brown, “How you like that, baby?” to which Brown replies, “I love that.”

“Let’s get another one,” Brady says.

Later on, Brady provides some guidance for how to counteract Young. He encourages his teammates to “pound their ass” in the run game and says doing so will turn the whole game around.

After Tampa Bay cements the win, in a conversation with the sidelined quarterback Smith, Brady says: “I’m proud of you, bro,” and calls him an inspiration. 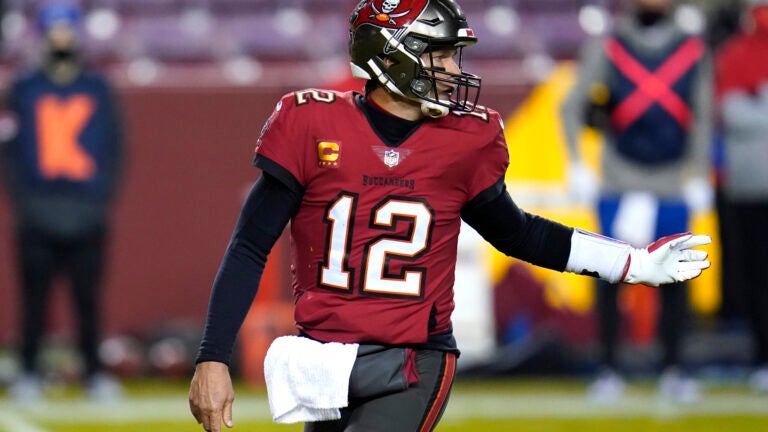 'Feels like the Buccaneers and Tom Brady have really found something': What NFL experts said after Tampa Bay's win