Tom Brady and the Tampa Bay Buccaneers had just punched their trip to the Super Bowl with a 31-26 victory over the Green Bay Packers when the Buccaneers’ star quarterback wanted to celebrate the special moment with his son.

The only problem: He wasn’t certain if he was allowed to do so.

Brady wandered over to the stands shortly after the final whistle blew and pointed at his 13-year-old son, Jack.

“Can I say hi to my son?” Brady could be heard asking security.

Security, it seems, was willing to make an exception for a man headed to the 10th Super Bowl of his career.

“Love ya, kiddo,” Brady said as he embraced his son.

The Buccaneers’ victory came a little over 10 months after Brady announced he was leaving the New England Patriots for a new home in Florida — a week after the sports world shut down due to concerns over COVID-19. A lot happened in the intervening time, but through it all, 43-year-old Brady — somehow — remained one of the most dominant players in the NFL.

Brady had a huge first half, posting 202 yards and two touchdowns. He started the game strong, leading a 66-yard drive down the field for a touchdown. Early in the second quarter, Brady fired a 52-yard pass to Chris Godwin for a big gain, setting up Leonard Fournette for an impressive 20-yard scamper into the end zone. Then, shortly before the half, Brady lofted a 39-yard pass to Scotty Miller for a touchdown that pushed Tampa Bay’s advantage to 21-10.

The second half opened in similar fashion. After Tampa Bay forced a fumble, Brady fired an eight-yard pass to Cameron Brate, who hauled it in and gave the Buccaneers a 28-10 advantage.

Then the wheels came off. Brady was intercepted three times in the second half, and the Packers closed the gap to five with a pair of unanswered touchdowns. The Buccaneers drove and converted a field goal, which was answered on the ensuing drive by the Packers.

Green Bay, however, didn’t have enough time. Brady and the Buccaneers got two first downs and ran out the clock.

Brady finished the game 20-for-36 passing with 280 yards, three touchdowns, and three interceptions. 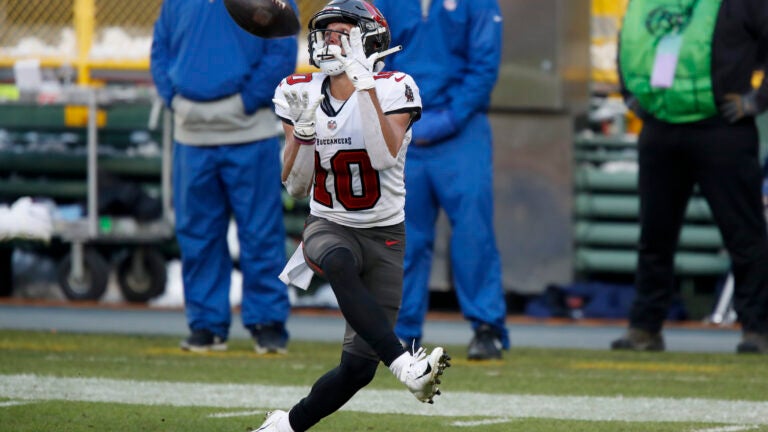