If you’re reading this story, you already know that Tom Brady is headed back to the Super Bowl. You may have also heard that Brady’s success (in his first season with Tampa Bay) has left Patriots fans in a bitter helpless rut.

Across the Internet, the football world is celebrating New England’s pain. They’ve unleashed Crying Jordans, Homer Simpsons, even this girl. One meme, retweeted more than 100 times, compared Pats fans to a knocked out Conor MacGregor. But the good news for New England is there’s an easy way to avoid these feelings. You don’t have to let Dustin Poirier redesign your face.

Here are 12 affirmations that can help.

Which narrative would you prefer this offseason?

b) Pat Mahomes, Andy Reid and the NFL’s newest dynasty.

It’s a classic pick your poison (where one of the poisons tastes like IBC root beer, and contains no actual poison). A Brady victory not only re-re-cements his all-time status, but eliminates a great successor to the Patriots throne.

Over the years, you’ve witnessed countless lives wasted rooting against Tom Brady. You know it doesn’t matter. It only makes him stronger. He feeds off that stuff like a spoonful of avocado ice cream . . .

Brady’s onslaught on the postseason record book is long-documented, but still outrageous, and only getting better. Pick a category, any playoff category, and you’ll find Brady, comically, in a stratosphere all his own. For instance, he’s now won more playoff games since turning 35 than any other quarterback won in his entire career. According to pro-football reference, Brady has orchestrated 14 game-winning playoff drives. That’s more than the combined totals of Peyton Manning, Brett Favre, Ben Roethlisberger, Aaron Rodgers and Drew Brees.

It doesn’t have to stop here. With a win in Super Bowl LV, Brady will have more rings himself than any single NFL franchise.

Brady’s accomplishments in Tampa have no effect on New England. There is nothing to gain from his defeat. Win or lose, the Pats are still rebuilding. The Brady we see in Tampa is not the Brady we would have seen in Foxborough. His departure didn’t mark the end of the Patriots dynasty. He left because it was already over. Another year would have been toxic, uglier than a Cam Newton screen pass.

If he beat the Chiefs, Tom Brady will have won a Super Bowl under four different U.S. presidents. That’s crazy (although easier when a president fails to win a second term).

Brady would also be a compelling headliner for the first championship visit to a post-Trump White House. That’s assuming he would make the trip, and that’s a conversation for later, but figure he’d at least respect the lack of Big Macs on the catering menu.

Everyone loves an underdog, and you don’t get much pluckier than Tom Brady. He’s like if Rudy was 6-foot-4 and married to a billionaire supermodel.

This is the second time Brady will take the field as a Super Bowl underdog. The first was 19 years ago, on what feels like a different planet, five months after 9/11 and five years before the first iPhone.

For a little perspective, imagine Pat Mahomes starting a Super Bowl in 2040.

Once again, here are your options* on February 7:

b) Root for Tom Brady.

How do you want to start your year?

(*One might also choose to not watch the game, but if you’ve read this far, don’t kid yourself.)

Think of it this way: Brady and Gronk winning together this year will make it easier to digest when Brady, Gronk and Edelman win together next year.

After Sunday’s NFC Championship, one of the cameras caught a special moment between Brady and his oldest son.

Now think back on your own memories of watching Tom Brady win Super Bowls. Pick a year. Where were you? Who were you with? How did it feel? How thankful are you for every minute?

All these years later, with his kids getting older, Brady’s carving out memories with his own family. He’s one win away from a big one.

And you’d rather he not?

You don’t think he’s earned it?

You’re not rooting for Tom Brady?

This summer will mark 20 years since the most depressing moment in Boston sports history. It’s not the ball that went through Buckner’s legs or the ball that stuck to Tyree’s helmet, but that time the city held a championship parade for another team’s championship. We’re talking June 2001, City Hall Plaza, when 15,000 fans celebrated Ray Bourque winning a Stanley Cup with Colorado.

It’s a level of desperation Boston fans can’t fathom anymore, and won’t have to for (at least) another generation. That’s because less than three months after the Bourque parade, Mo Lewis hit Drew Bledsoe.

The real parades got rolling.

For at least one more night, it will be again.

(Or get your face smashed in by this guy.) 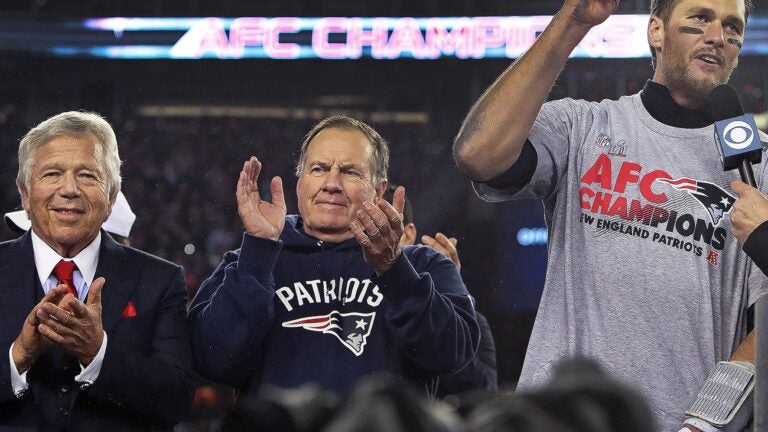