On Wednesday, the Celtics lost to the Spurs, 110-106. The defeat came despite the team’s primary core — Kemba Walker, Jayson Tatum, Jaylen Brown, and Marcus Smart — playing together for the first time all season.

Also on Wednesday, the Pride fell to the Connecticut Whale 4-1 in the NWHL bubble at Lake Placid.

Tonight, the Bruins face the Penguins at 7 p.m.

Adam Schefter’s thoughts on Nick Caserio: Earlier in January, the Texans announced the hiring of Nick Caserio as the team’s new general manager.

Prior to taking the new role in Houston, Caserio worked for the Patriots since 2001. From 2008 until his departure, he was New England’s director of player personnel.

Yet Caserio was immediately thrown into difficult circumstances by a preexisting dispute between Texans quarterback Deshaun Watson and team ownership.

During a Thursday segment on ESPN morning show “Get Up!”, former NFL cornerback Domonique Foxworth (now an analyst) asked insider Adam Schefter about the circumstances of the hiring of Culley.

“The thing that comes to my mind is for that situation, is this a job that people wanted, because I imagine that David Culley got one interview this year, he’s been in the league a long time and his name hasn’t come up very often,” said Foxworth. “No disrespect to him, but it wasn’t like he was a highly coveted candidate.”

“They might have gone after some of these bigger names, but then they looked at the situation and said, ‘We have a quarterback who wants to get the hell out, we have a clergyman making the roster decisions, and we have an owner who it feels like the team doesn’t trust,” Foxworth added. “If I am Eric Bieniemy, or Leslie Frazier, or Todd Bowles, or Jerod Mayo, one of these coaches who looks like they might have other options, or might have a long time in this league, I look at that situation where there are no draft picks in the upcoming future, I look at that situation and Cal McNair calls me and says, ‘Hey Eric Bienienmy, why don’t you take this job?’ I say no! I’m going to wait for something a little less dire to show up.”

Foxworth closed with a specific question.

“The question there is had they offered or did they have interest in other people in this situation and ended up with David Culley because maybe those people did not have as much interest in the Texans?”

“I wonder, if we’re going to drink truth serum, would Nick Caserio have been as interested in that job, and taking that job, if he knew that that house was burning to the ground the way that it has over the last few weeks?” Schefter asked.

“And I don’t know the answer to that, but my guess is — again, to your point, Domonique — no,” Schefter continued. “Most coaches around the league would want nothing to do with this job. That’s the truth of the matter. Eric Bieniemy, when they reached out to talk to him, wasn’t even sure if he wanted to speak with them, no less take the job. So no, this was not a desirable job.”

Later on Thursday, Schefter reported that Watson had officially requested a trade from the Texans:

Deshaun Watson officially has requested a trade from the Houston Texans, per league sources. He actually did it weeks ago. Their new head-coaching hire, David Culley, has not and will not alter Watson’s thinking.

Trivia: According to Pro Football Reference, what former Patriot has the most career tackles in Super Bowl history?

Hint: He recorded his first Super Bowl tackle against the 49ers.

Charlie McAvoy on facing Zdeno Chara as an opponent: The question begins at the 2:06 mark.

.@CMcAvoy44 on playing over 27 minutes in the #NHLBruins win over the Pens last night: “It’s a lot of situational hockey. At the end of the day, you’re going out there and playing hockey…I try and just go out regardless of the situation and do what allows me to have success.” pic.twitter.com/eWgGoQNiWR

A Pro-Bowl throwback, including 2002 Tom Brady:

On this day: In 1971, the Patriots selected Heisman Trophy-winning quarterback Jim Plunkett first overall out of Stanford University.

Despite his ability, Plunkett never achieved success with the Patriots, leading the league in interceptions in 1974 (with 22). In 1975, he started just five games — eventually losing the starting job to Steve Grogan — and completed just 39.1 percent of his passes.

Somehow, the Patriots were able to trade Plunkett for three first-round picks (as well as a second rounder) to the 49ers in 1976. New England rebuilt around Grogan, and posted five consecutive winning seasons following the trade under head coach Chuck Fairbanks.

Plunkett eventually wound up with the Raiders, where he finally achieved a measure of the success that had been predicted when he was drafted. As a veteran, Plunkett led the Raiders to victories in Super Bowls XV and XVIII. 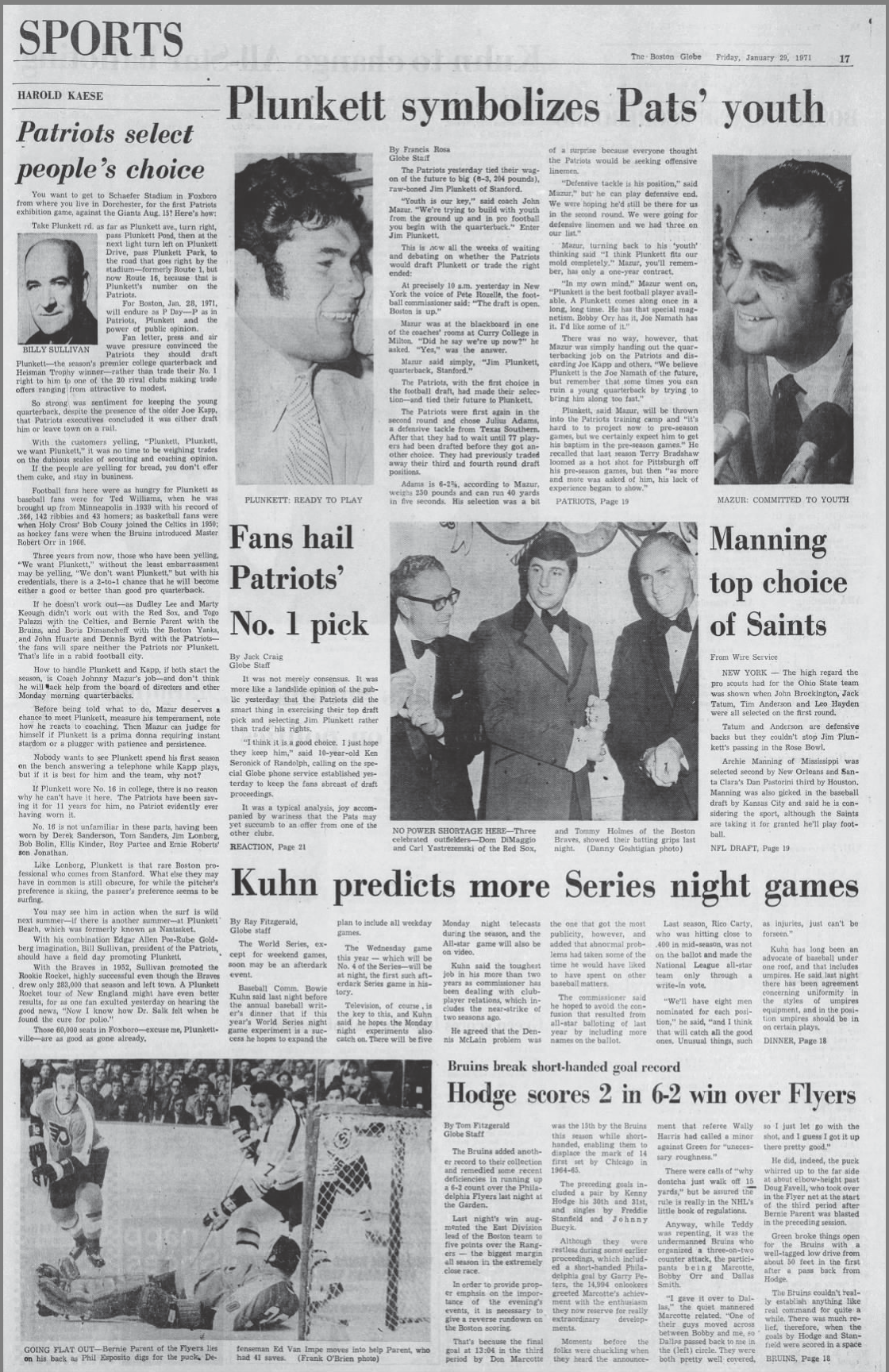 Daily highlight: Tony Hawk is still putting in the work.

I recently made a 720 and it was a battle. The last one I made before this was over three years ago, and it’s much harder now all things considered: recently dislocated fingers hinder my grab, my spin is slower so I need to go higher for full rotation and…
I’m really old. pic.twitter.com/u8pbwRhS9j