Deshaun Watson is trying to break up with the Houston Texans, but the Texans aren’t letting the relationship crumble without putting up a fight.

Watson officially requested a trade earlier this month, but new head coach David Culley said he “knows” Watson will be with the Texans next season, according to NFL reporter Ian Rapoport. General manager Nick Caserio took a little more of an “open-ended stance” but made it clear the Texans have “zero interest” in trading the 25-year-old superstar Watson.

“These are the words we are now going to parse from now until March 17,” Rapoport said. “Nowhere was there a ‘We’re definitely not trading him.'”

Deshaun Watson officially has requested a trade from the Houston Texans, per league sources. He actually did it weeks ago. Their new head-coaching hire, David Culley, has not and will not alter Watson’s thinking.

Rapoport noted that Patriots head coach Bill Belichick doesn’t rule anything out himself. Belichick rarely says the Patriots are definitely going to do something, instead opting to keep all their options open.

Rapoport indicated that it could be a while before the situation is sorted out, adding that there are “a lot of hoops to jump through.”

It just so happens that the Patriots are in need of a quarterback, and they could emerge as one of Watson’s potential suitors. With Cam Newton’s future uncertain, and Jarrett Stidham showing minimal signs that he’s a franchise QB, the Patriots could inquire about Watson.

Yahoo! NFL columnist Charles Robinson said the Patriots are the one team in the “highly unlikely crowd of contenders that should consider blowing up the obvious destinations with an overwhelming offer.”

Robinson noted that it likely wouldn’t work in large part because the Patriots have the 15th pick in the 2021 NFL Draft. He called Watson’s five-year, post-trade average of $29.3 million per year “very economical” considering his talent but said Belichick may not love the idea of paying any quarterback so much money. There’s also the behind-the-scenes drama between executive Jack Easterby, who was formerly a team chaplain for the Patriots, and New England owner Robert Kraft.

Robinson proposed trading for Jimmy Garoppolo or drafting Mac Jones as simpler options, but he noted how much Belichick has praised Watson in the past. If the Patriots want to win now, before Belichick retires, he indicated that it’s possible it’s worth the gamble.

“Deshaun’s a very talented player – certainly one of the top players in the league at his position that we’ve faced,” Belichick said in 2019.

NESN’s Zack Cox encouraged fans to not get their hopes up and said that the odds the Patriots win the Watson sweepstakes are “extremely low.” He cited the 15th pick, Caserio’s reported unpopularity, and Watson’s no-trade clause as major reasons it’s unlikely.

NFL Network’s Cynthia Frelund included the Carolina Panthers, Miami Dolphins, and the Washington Football Team as possible spots for Watson, leaving the Patriots off her list.

ESPN’s Bill Barnwell floated around a trade that could possibly work for both sides. The Patriots would send their 15th overall pick and third-round compensatory pick in the 2021 draft, a 2022 first-round pick and 2023 second-round pick, J.C. Jackson, and N’Keal Harry in exchange for Watson and tight end Kahale Warring.

FS1’s Colin Cowherd believes the best landing spot for Watson is San Francisco. He believes that could pave the way for Garoppolo to return to New England.

Jimmy Garoppolo back to New England? Sam Darnold to Washington?@ColinCowherd takes a look at the Domino effect around the NFL should Deshaun Watson land in San Francisco: pic.twitter.com/GvybeLOjmf 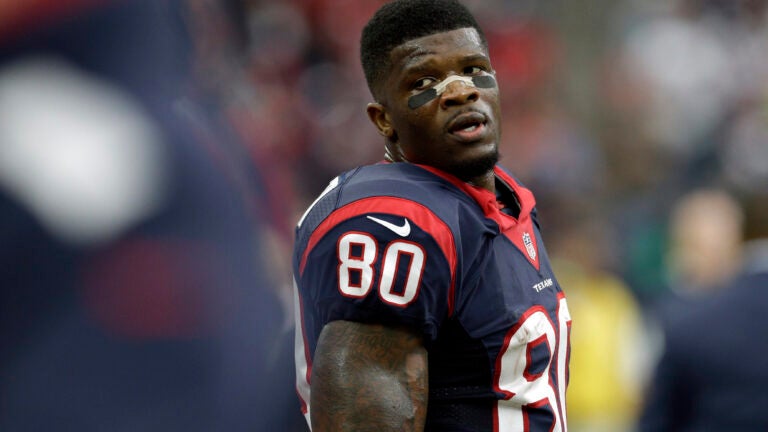