1. If watching Tom Brady play for a football team other than the Patriots was a season-long exercise in the bittersweet, in the end, it was more sweet than bitter. Sure, there were pangs of envy in watching him throw three touchdown passes – two to Rob Gronkowski, another of our best old ex-friends who found happiness elsewhere – while winning his seventh Super Bowl ring. It stings to see how easily he and his family have put New England behind them.

He should have spent his whole career here. I doubt I am alone in wondering why Bill Belichick’s genius would not permit him to recognize that Brady was the outlier of all outliers, a quarterback who could thrive and then some after 40. Brady’s genius should not have been shared with another fan base. But there was some familiar joy to be found in watching Brady still do his thing. I wasn’t sure that would be the case, but I found myself pulling for him. Did you do the same? How could anyone resist? He was exceptional in his precision (21 of 29, 201 yards, three touchdowns), the best damn quarterback on the field yet again. It all looked so familiar, like a composite of his Patriots highlights but with the uniform airbrushed, and ultimately I couldn’t look at what he achieved Sunday night as a reason to lament that he’s no longer here. I accepted it as a reminder of how fortunate we were to watch him do that for the Patriots for so long. I’m glad he’s a champion again.

2. There can be some real satisfaction found in what he’s achieved with the Bucs. A seventh title only bolsters his standing as the greatest quarterback ever to play, and we’re all for beefing up that résumé, even more, to counter the Manning Family Media Cabal or the Joe Montana Was Undefeated In The Super Bowl Super Pac. (It was also his least-suspenseful Super Bowl win, by far, so he’s still achieving new feats.) He silenced all of those silly takes about Patrick Mahomes being on a similar career path (Brady won three Super Bowls in his first four seasons as a starter. Mahomes has won once in three seasons as the starter, with two crushing losses to Brady in the playoffs. He vaporized the Chiefs’ dynasty blather, which began the minute they beat the Niners last year; they’re a dynasty like the ’13 Seahawks were a dynasty. Oh, and he got some small measure of revenge on Steve Spagnuolo, the 2007 Giants defensive coordinator who was hopeless in the same role for the Chiefs Sunday night.

3. Nice little night of vengeance for Brady, all in all. I’ll admit to wondering whether Belichick was watching the game and what his color commentary might sound like. I suspect Belichick recognized that the Chiefs were in deep trouble before their first possession was over. Mahomes never looked right from the start, more due to his bookend starting tackles being absent than any lingering effects from his toe injury. Under siege all night from a talent-laden Buccaneers defense that was so relentless and reminiscent of the best Patriots championship defenses, Mahomes finished 26 of 49 for 270 yards, with no touchdowns and two interceptions. He had just 67 passing yards in the entire first half, completing 9 of 19 passes. Tyreek Hill had 13 of those yards, on two catches. In the Chiefs’ win over the Bucs in Week 12, Hill had 203 receiving yards and two touchdowns in the first quarter alone. You know, I think the Bucs made some adjustments since then. Just a hunch.

4. Say, is there any way the Patriots can get a version of Devin White with their first round pick in the upcoming draft? I know, probably not: They’re picking 15th, and White was an elite prospect who went No. 5 overall in the ’18 draft out of Louisiana State. What a player the kid is. Maybe it’s the uniform number (45), but the hard-hitting linebacker also seems to have the full skill-set of a strong safety. White finished with a game-high 12 tackles (eight solo), including two for a loss, broke up a pass, and put the exclamation point on the win with an interception in the end zone with 1:40 left.

5. A moment when it became easy to root for the Bucs, at least for those of us who entered the game undecided: When Brady found Gronk on a little screen pass for the game’s first touchdown with 37 seconds left in the first quarter. I know some Pats fans are mad about how his time here ended, but the guy put his health on the line over and over again and was as fun to watch as any Patriot has ever been. A moment when it was easy to root against the Bucs? When Brady hit the detestable Antonio Brown for a touchdown right before the half. I’m going to keep pretending he was never a Patriot if you will.

6. The Chiefs gave Brady and the Bucs offense break after break in the first half, especially on Tampa Bay’s second touchdown drive. Chiefs punter Tommy Townshend, who was anonymous before the game and terrible during it, shanked a 29-yard punt after a penalty negated a longer one. Brady was intercepted by Tyrann Mathieu on third down, but a holding penalty on Charvarius Ward negated that. A couple of plays later and facing fourth down, the Bucs got a new set of downs when Antonio Hamilton lined up in the neutral zone on a field goal attempt.

7. That wasn’t even the worst of it. After Harrison Butker booked a 34-yard field goal to make it a one-score game (14-6) with 1:04 left in the first half, the Chiefs melted into a puddle. Breshad Breeland tripped Mike Evans, drawing a 34-yard pass interference penalty. Two plays later, Mathieu committed pass interference in the end zone, putting the ball on the one and setting up the Brown touchdown. It was a debatable call, though as Tony Romo noted on the broadcast even before the flags started flying, the Chiefs are known for holding on defense. But the Chiefs, the defending champs, acted like a team that had never been there before. Can’t do that when you’re up against a guy who is there almost every year. 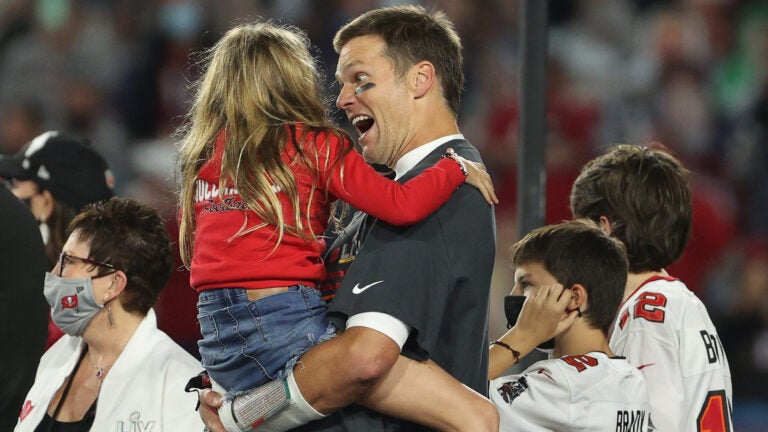 Tom Brady celebrates with his family after winning Super Bowl, says he plans to return