Sunday was one of those nights where simply everything went the Tampa Bay Buccaneers’ way.

Tom Brady delivered a masterful performance, Rob Gronkowski was unstoppable, and the defense made life rather difficult for Patrick Mahomes as the Bucs cruised to a 31-9 win over the Kansas City Chiefs in Super Bowl LV.

Perhaps the most telling example that they caught nearly every break came late in the first half, when Tampa Bay marched downfield and scored with six ticks left in the second quarter to take a 21-6 lead into the break.

On the touchdown, a 1-yard strike from Brady to Antonio Brown, quarterbacks coach Clyde Christensen revealed Monday that Brown actually ran the wrong route. Christensen said on “The Pat McAfee Show” that Brown was supposed to go in and then pop back out, but instead, he went out and then popped back in to secure the catch.

“I’m kinda going through the headset,” Christensen told McAfee. ‘”Did he run the right route? Did he just do the opposite of what he’s supposed to do and we hit it for a touchdown?’ And that was the case.”

Christensen said the fact that the play worked is a testament to Brady’s experience and savvy.

“That’s where Brady doesn’t get thrown for a loop,” Christensen said. “He just hits the guy. ‘Hey, you get open, I’ll hit you.’ That’s where he’s pretty darn unique. A lot of quarterbacks are, ‘Hey, he’s supposed to do this: A to B to C.’ This guy A.B. goes C to F back to A, and he just hits him for a touchdown.”

Brady chose to not specifically mention Brown’s miscue that developed into one of the game’s biggest plays. Instead, he noted in his postgame press conference how Brown has done everything the right way since he arrived in Tampa Bay.

“So impressed by him. Proud of him,” Brady said. “It takes a lot of people for us to get to this point. We all have great support systems in place and I think everyone should be celebrating them tonight.” 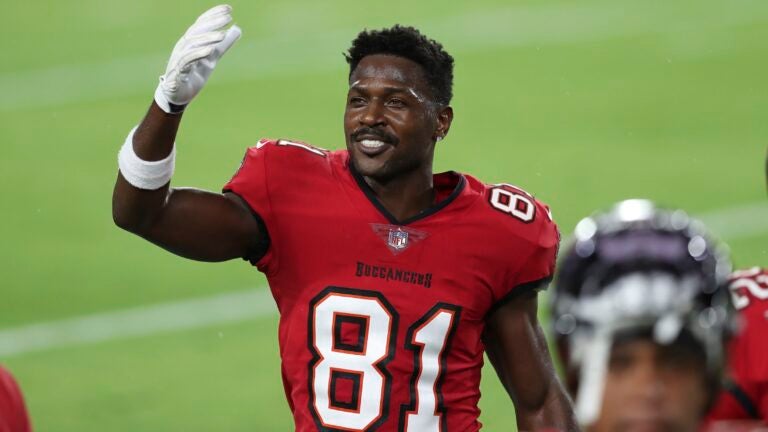