The powers that be in the NFL rarely can resist some casual gloating about their achievements. If there were a coat of arms on the NFL shield, it might feature a hand patting the back of a Brooks Brothers suit.

My favorite example of this occurred during Roger Goodell’s news conference the week leading up to Super Bowl XLIX in January 2015. In the midst of a barrage of questions about Deflategate, the planted kid from the “Play 60” commercials took the microphone and asked the commissioner what he does for a workout. Goodell mentioned, with that familiar immutable smugness, that his workout is 65 minutes. I’m still surprised he didn’t bring up the concept of six-minute abs.

The league broadcast partners are, of course, willing amplifiers of the NFL’s achievements, whether the feats are legitimate or trite. I never heard a word about how there are 256 games on a full NFL regular-season schedule until the quest to play every game became a recurring talking point this season — and then a point of pride when all 256, plus the playoffs, managed to be played during the COVID-19 pandemic. Who cares if the Broncos had to start a practice squad receiver at quarterback one week, or the Saints had none of their regular running backs in another? Got ‘em all in! Two-fifty-six! (Pat, pat.)

Ah, this league brings out the worst of an old media columnist’s cynicism. Getting through this season was a genuine achievement. I just wish the league put more emphasis on appreciating everyone who made a sacrifice to pull it off — and not just the players, coaches, and league officials, but the folks making it work on the media side, too.

Much of the motivation to play every game was the enormous television revenue at stake. The league quested to make the games look as normal as possible — remember in the early going, when broadcasts tried to avoid showing the empty seats, the nothing-to-see-here approach? The obligation fell to the broadcast teams to make them come across that way, even when nothing elsewhere felt normal at all.

The broadcasters and production crews did a commendable job while facing weighty concerns of their own. CBS’s Ian Eagle told me about the psychosomatic effect of waiting for a COVID-19 test result to come back to find out if you’d be able to work. Fox’s Kevin Burkhardt told me about the stress of traveling, of seeing unmasked people at airports and worrying that everyone wasn’t acting as responsibly as they should.

Some broadcasters were affected along the way. NBC’s Al Michaels, who griped about having to wear a mask during an Eagles-49ers game earlier in the season, missed a Week 15 Giants-Browns game because of COVID-19 protocols. Tony Romo missed the Week 17 Rams-Cardinals broadcast on CBS for the same reason.

In looking back at the 2020 NFL broadcasting season, the biggest superlative is that they got through it while consistently delivering a good and welcome product.

A few other superlatives from NFL broadcasts, as I saw them . . .

· Best broadcast team: Eagle, Charles Davis, and Evan Washburn: CBS Sports chairman Sean McManus had long wanted to bring Davis over from Fox. It happened this season, and the paring with play-by-play voice Eagle, along with sideline reporter Washburn, was remarkably seamless. They sounded like they’d been together for a half-decade.

· Best studio analyst: Nate Burleson, CBS. He’s not a star in the making. He’s a star, period, and his versatility and ability to connect with younger demographics was made even more apparent with tone-perfect contributions to CBS’s Nickelodeon broadcast of the Bears-Saints playoff game.

· Most pleasant surprise: The Tom McCarthy-Jay Feely tandem had the call of the meaningless Jets-Patriots regular-season finale on CBS. They’re the seventh team on the CBS depth chart, and I’ll admit I was expecting a flashback to the early-’90s days of Don Criqui and Beasley Reece calling Patriots games. But McCarthy, better known as an excellent baseball play-by-play voice, and Feely were insightful and well prepared. They’re certainly good enough to do higher-profile games.

· Silliest rumor: That Jim Nantz could end up at ESPN. Nantz, whose contract is expiring, reportedly wants a salary in the range of the $18 million that Romo, his partner in CBS’s No. 1 NFL booth, hauls in annually. Nantz is the quintessential pro and is a reason Romo’s smooth transition from player to analyst was such a hit, but budget-conscious ESPN is not about to pay that for any play-by-play voice right now.

· Best ex-Cowboys quarterback in the booth: I like Romo, but Fox’s Troy Aikman is better. The chemistry with Joe Buck (admit it, you like him) is effortless after 17 seasons together, he’s quick to laugh, and he’s not afraid to criticize, even when it comes to his former team. “I just don’t know where this organization . . . where they go,’’ Aikman said late in the Cowboys’ Week 13 loss to the Ravens. “There are just so many things that have to be addressed this offseason.”

· Most amusing malapropism: Fox’s Daryl Johnston bollixed a couple of names during the Patriots’ Week 12 win over the Cardinals, including referring to Patriots receiver N’Keal Harry as “K’Neal Harry.” I’m not sure if there is a K’Neal Harry in this world, but if there is, he finished with just 33 fewer catches than N’Keal this season.

Interesting game of musical chairs on the Celtics beat recently. The opening at MassLive.com that was created when John Karalis left to focus the majority of his energy on his popular “Locked on Celtics’’ podcast was filled by the hire of Boston Sports Journal’s Brian Robb. In the meantime, Karalis had been reaching out to local outlets about doing freelance work, and he ended up landing at BSJ to take the spot vacated by Robb . . . A couple of notable changes to WEEI’s weekend lineup: Chris Curtis and Ken Laird, the producers of the morning-drive “The Greg Hill Show,’’ will have their own Saturday program from 9 a.m.-1 p.m. Globe NFL columnist Ben Volin will join them in the noon hour. That will be followed by “The Fitzy and Mego Show” from 1-4 p.m., featuring Nick “Fitzy” Stevens and Herald multimedia reporter and NBC Sports Boston “Quick Slants” co-host Meghan Ottolini. Here’s hoping she can convince Fitzy to stop referring to Tom Brady’s current NFL home as “Tompa Bay” on every reference. 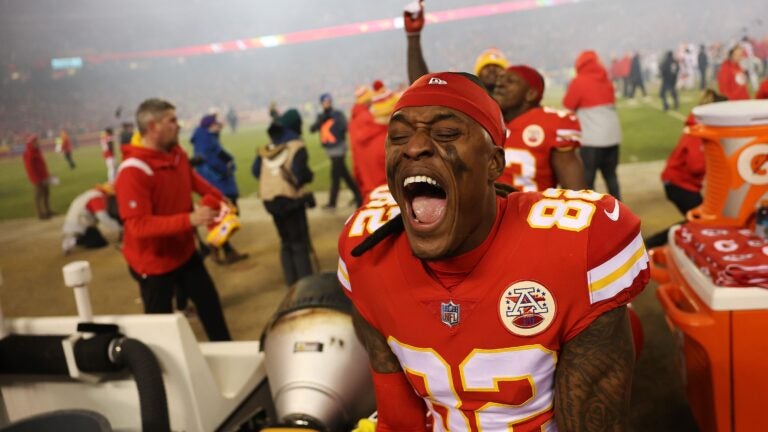