And in the latest episode confirming that journalism ethics and media literacy desperately needs to be taught in schools, we have the Adam Schefter “Mr. Editor” saga and the misguided (or perhaps compromised) few that are defending him.

In case you missed it among all the other scandals in sports last week, Schefter, ESPN’s premier NFL info-nugget dispenser, was revealed to have sent a full draft of a story to Bruce Allen, then team president of the Washington Redskins, in 2011.

“Please let me know if you see anything that should be added, changed, tweaked,” wrote Schefter, in an e-mail from a June court filing regarding the Washington Football Team that was first reported Tuesday by the Los Angeles Times. “Thanks, Mr. Editor, for that and the trust. Plan to file this to espn about 6 am . . . ”

No matter whether the “Mr. Editor” line was tongue-in-cheek or not, Schefter committed a major violation of journalism ethics by sending Allen the story in full and encouraging him to make changes. It is good form to be forthcoming with sources about the tone and contents of a story, let them know which quotes are being used, and give them an opportunity to add further context.

But giving them editing power to make additions, changes, and tweaks is not journalism. It’s stenography, and for some reporters it would be career-ending. Any reporter suggesting this is an OK practice — such as prominent media and brands reporter Darren Rovell — is probably revealing the truth about their own ethics, or willingness to set them aside for access.

Schefter, with his 8.6 million Twitter followers, is too valuable to ESPN to be hit with real consequences, which was evident in the network’s statement about the situation: “Without sharing all the specifics of the reporter’s process for a story from 10 years ago during the NFL lockout, we believe that nothing is more important to Adam and ESPN than providing fans the most accurate, fair and complete story.”

Unless further Schefter-Allen interactions get leaked from the trove of 650,000 e-mails reviewed by the NFL as part of the workplace misconduct case with the Washington Football Team, we may never get the accurate, fair, and complete story about this. Did Allen, ol’ Mr. Editor, suggest changes? Did Schefter make them?

The satirical website “The Onion” was, as usual, on point with all of this, posting a story titled: “Adam Schefter Waiting On Final Edits From NFL Before Issuing Apology.”

Eventually, in his own statement, which was tweeted out by ESPN’s PR account, Schefter said it was rare for him to send stories to sources before publication and did in this case because the topic, regarding the league’s collective bargaining talks with the NFL Players Association, was so complex.

“In no way did I, or would I, cede editorial control or hand over final say about a story to anyone, ever,” Schefter said, calling it basically common practice to run information past sources.

That last part is true. It will remain uncertain whether any other part of it is until we know Allen’s response, and Schefter’s reaction to his response. Perhaps some real, honest-to-goodness reporting from other outlets will reveal those truths.

We know it’s not coming from ESPN and the highest-profile NFL info-swapper around.

A couple of scattered thoughts as ESPN and Turner Sports drop the puck on their NHL coverage . .

⋅ It struck me the first couple of nights how familiar everyone is, even if they’re new to NHL coverage. TNT’s studio coverage is hosted by Liam McHugh, known to most from his good work with NBC Sports for so many years. Anson Carter, also formerly of NBC, is an analyst. Fellow analyst Paul Bissonnette was one of the first athletes to use social media to cleverly enhance his profile. Rick Tocchet played 18 seasons in the NHL and coached another six. And the other analyst? Some guy named Gretzky.

Oh, and there has been further proof that Charles Barkley’s presence, even in a sport he knows nothing about, makes any studio show better. It wasn’t much different on ESPN, where Chris Chelios and Mark Messier, the newcomer analysts, begin the gigs with massive name recognition.

⋅ ESPN has hit occasional patches of rough ice in the early going, which is probably to be expected after pretending hockey barely existed for 15 years. Most notably: The broadcasters’ voices on the Knights-Kraken opener were difficult to hear.

But the joy of the longtime hockey diehards at ESPN — among them Linda Cohn, Steve Levy, and John Buccigross — has been evident. And the network paid thoughtful homage to some of its hockey voices of the past, including the late Tom Mees.

⋅ It was interesting to hear NHL commissioner Gary Bettman acknowledge on John Ourand and Andrew Marchand’s sports business podcast that, yes, ESPN did neglect to pay much attention to the league when it didn’t have broadcast rights.

“With my tongue in my cheek,’’ said Bettman, “I’ve said a number of times that if ESPN is half as good at promoting us as they were at freezing us out when they didn’t have our rights, this is going to be great.” 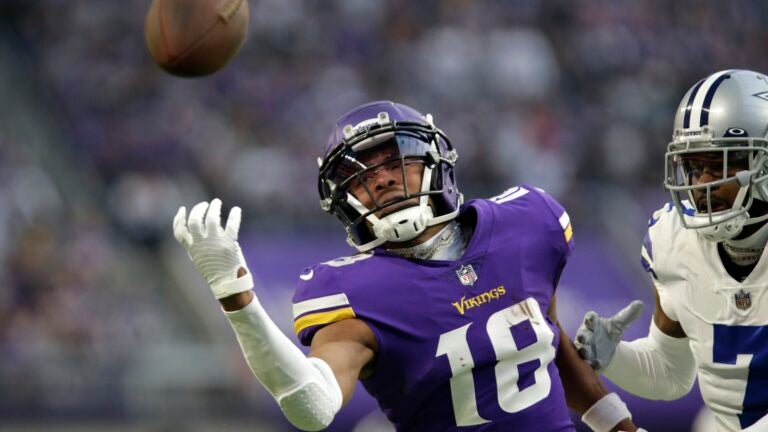 Is this Patriots team ready for prime time? We'll start finding out on Thanksgiving against the Vikings.