Anyone expecting a rip-roaring Super Bowl with a ton of points scored by the Bengals and Rams came away disappointed. In fact, the halftime show was by far the most interesting thing that happened at SoFi Stadium for most of Sunday night.

But in the end, the game was worthy of the big stage as arguably the NFL’s two best players on their respective sides of the ball, Cooper Kupp (eight catches, 92 yards, two touchdowns) and Aaron Donald (two sacks, three quarterback hits), dominated down the stretch.

It still took nearly the full 60 minutes for the favored Rams to finally put away the pesky upstart Bengals, holding on for a 23-20 final score that wasn’t assured until Joe Burrow’s last pass fell harmlessly to the turf.

But when the dust settled, Los Angeles’ all-in approach to the season, from trading for Matthew Stafford before the season to acquiring Von Miller and Odell Beckham Jr. mid-season, paid off with the franchise’s first Super Bowl championship in more than 20 years.

Matthew Stafford rips the monkey off his back.

No one’s going to joke about Stafford now.

After being the butt of jokes for years with the Detroit Lions and reviving doubters with a couple of rough performances late in this season, he showed everyone he has what it takes to win a Super Bowl.

His second game-winning drive of the postseason was one of the gutsiest performances of his career. Hobbled by an ankle that got rolled up on in the third quarter and struggling with Odell Beckham Jr. out of the game, Stafford turned in a masterpiece for his final drive: a 15-play, 79-yard effort that ended with a picture-perfect touchdown to Cooper Kupp.

In standard Stafford form, it wasn’t all puppies and sunshine. The first of his two interceptions, in particular, was the kind of very late, ill-advised throw that has plagued him his entire career.

This time, though, he didn’t let the mistakes kill him and his team. On the contrary, he pushed through it, just as he did in the divisional round against Tampa Bay, and came out a winner.

If this is what Stafford looks like on a real football team, it’s a pity we didn’t get to see it sooner. Though it might be a bit too early to say he’s Canton-bound just yet, one of the biggest hurdles to him getting a Hall-of-Fame jacket is now gone.

There have, without a doubt, been better wide receivers in the history of football than Cooper Kupp. But arguably no wide receiver ever put up a greater season than Kupp just did.

Offensive Player of the Year. Led NFL receivers in catches, receiving yards (setting a new single-season NFL record, by the way), and touchdown catches. He also had the most catches ever in a single postseason.

You could argue Donald’s defensive brilliance merited an MVP vote as well, of course. But to understand why Kupp won it, you have to realize where the Rams would’ve been without him in this game.

Los Angeles couldn’t run the football to save their lives. Odell Beckham’s injury left Stafford relying on Ben Skowronek and tight ends no one had heard of. The Rams were facing a win-or-die last drive.

So Stafford honed in on Kupp — and just about only Kupp — to move the chains, targeting him seven times on the final drive. He even ran the ball on fourth-and-1 for a first down.

Then, he and Stafford finally got what they wanted: Kupp against Eli Apple one-on-one in the end zone. Like stealing.

Kupp will never win league MVP in an NFL that almost exclusively gives the award to quarterbacks. But it couldn’t have been more obvious the Rams wouldn’t have won this game if they didn’t have Cooper Kupp.

The Bengals and Rams came into Sunday’s championship contest with reputations for explosive offenses. For the most part, though, this was a contest marked by the defensive prowess of both squads.

As usual, though, Donald, the greatest defensive player of his generation, stood above the rest.

Measuring his impact solely in numbers (two sacks, three quarterback hits) simply doesn’t do it justice. He was unblockable all game, and his consistent domination helped open the door for the Rams to grab seven sacks.

Then, there was Donald’s play in the clutch. One of his sacks halted a potential Bengals touchdown drive, forcing Cincinnati to settle for a field goal that loomed large later.

Finally, when the chips were down — third-and-1 at midfield — Donald stuffed Samaje Perine for no gain and then stormed into the backfield to force Burrow into the game-sealing incompletion.

From the moment he came onto that field for the last drive, there was no doubt he would dominate. And he did. That’s what the great players do.

If this somehow ends up being Donald’s last game, which is apparently a possibility based on some pregame reporting, what a way to go out.

For 22 games, the Bengals soldiered on despite having one of the worst offensive lines in football. Joe Burrow’s wizardry in the pocket and ability to pull plays out of thin air covered up issues upfront, as did the team’s ability to run the football.

Going up against the Rams was a bridge too far, though.

Cincinnati was always going to struggle to block Aaron Donald, but they also let Von Miller (two sacks), Leonard Floyd, and Ernest Jones through. The line allowed an ugly 11 hits on Burrow. What’s more: they couldn’t pick up crucial short-yardage situations late in the game to give kicker Evan McPherson a chance a game-tying kick.

Burrow (22-of-33, 263 yards, one touchdown) was once again pretty good despite the chaos, but even he isn’t at that level of superhuman yet where he can win every single game on his own.

The Bengals shouldn’t regret passing up the opportunity to upgrade their offensive line in the draft in favor of grabbing Ja’Marr Chase, who looks like a bonafide NFL superstar already. But the mandate going into this offseason is clear: revamp that offensive line and give Burrow a fighting chance.

You never want to see players injured in a game, especially not the Super Bowl. But Beckham’s knee injury suffered in the second quarter felt especially cruel.

By all indications, it looked like the veteran star receiver suffered a serious knee injury when he came up hobbling without being hit while trying to make a catch. He walked gingerly off the field with some assistance and was ruled out during the second half of the game.

Beckham took a lot of heat for the way his time with the Cleveland Browns ended, but he proved he could still make a difference for a championship contender in his limited time with the Rams. All five of his regular-season touchdowns came with Los Angeles, and he scored the Super Bowl’s first touchdown on a 17-yard strike from Stafford.

Losing their second-best receiver hurt the Rams badly on offense though they eventually overcame it enough to win. But the injury is even worse for Beckham: he was set to be a free agent this year and likely could’ve earned a solid contract. In fact, it would’ve been nice to see the Patriots take a run at him after he admitted he was close to signing with New England following his release by the Browns.

If the injury was as bad as it looked, he might not play at all in 2022. Though he’ll be happy to get the Super Bowl ring, it’s unfortunate it came at this cost. 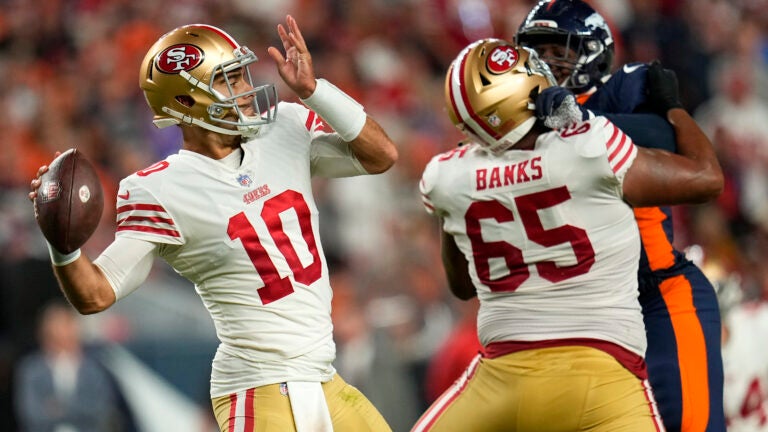