The NFL is considering a potential appeal of the six-game suspension a disciplinary officer imposed on Cleveland Browns quarterback Deshaun Watson for violating its personal conduct policy, based on allegations of sexual misconduct.

Such an appeal, if pursued by the league, could result in an increase to Watson’s suspension, particularly given that it would be resolved by Commissioner Roger Goodell or a person he designates. The league argued to Sue L. Robinson, the disciplinary officer appointed by the NFL and the NFL Players Association, for an indefinite suspension of at least one full season that would require Watson to apply for reinstatement.

But a decision by the NFL to appeal also could be viewed as a repudiation of Robinson, the former U.S. district judge who issued her first ruling Monday under the new disciplinary system established in the 2020 collective bargaining agreement. And if Goodell or his designee increases the suspension through the appeal process, the union and Watson could file a lawsuit that would renew the courtroom sparring between the league and the NFLPA over player discipline.

“There is a benefit to finality and in not dragging this on, not only through an appeal potentially with the commissioner, but then we know that the prospect of a lawsuit by the NFLPA is significant,” Gabriel Feldman, the director of the sports law program at Tulane University, said in a phone interview Tuesday. “Based on precedent, we have certainly seen the NFLPA be aggressively willing to challenge commissioner discipline decisions in court. And so the NFL has to balance their desire to strictly enforce the conduct policy with their desire to be deferential to a new neutral arbitrator . . . and finality.”

The league had not indicated as of Tuesday night whether it will appeal. It has until Thursday to file a written appeal. The NFLPA then would have until Monday to file a response.

“We are determining next steps pursuant to the . . . CBA negotiated with the NFLPA,” the NFL said in a statement issued Tuesday through a spokesman.

Either side can appeal Robinson’s ruling to Goodell or his designee. But the NFLPA and Watson issued a joint statement Sunday night, ahead of the ruling, saying they would abide by Robinson’s decision. They urged the league to do the same.

“The NFL can very easily point to the collective bargaining agreement and say this was always intended to be an intermediate step and that both parties have a very fair right to appeal,” Feldman said. “So it’s not so much that the NFL would be calling into question the credibility of the arbitrator. . . . Instead, I think the greater risk is in dragging this case out even longer and then potentially ending up back in court, trying to explain why the decision of a hearing officer was insufficient.”

The National Organization for Women called the six-game suspension imposed by Robinson “unacceptable, insulting, and dangerous.”

The organization added in a statement: “Deshaun Watson must not be allowed to profit from his horrific behavior, and the NFL must change its business model that allows, enables, and hides sexual misconduct into one that respects women and holds abusers accountable. Shame on the Cleveland Browns for rewarding Deshaun Watson and shame on the NFL for perpetuating a system where money talks, and women aren’t heard.”

The CBA says any appeal “shall be limited to arguments why, based on the evidentiary record . . . the amount of discipline, if any, should be modified.”

In that way, Robinson may have provided the league with a factual basis to argue the suspension should be increased. She ruled the NFL proved its case that Watson violated the personal conduct policy by committing sexual assault (defined by the league as unwanted sexual contact with another person), by posing a genuine danger to the safety and well-being of another person and by undermining or putting at risk the integrity of the NFL.

Robinson called Watson’s behavior “predatory” and “egregious.” But she also wrote that Watson committed “non-violent sexual assault” and said she was bound by the precedent of previous punishments the league imposed.

“The commissioner or his designee does not have the authority under the CBA to re-litigate the facts or to question the factual determinations,” Feldman said. “The only question is whether the punishment is appropriate, given the facts. And I think the opportunity is certainly there for the commissioner to question whether the punishment was sufficient, given the severity of the conduct that was alleged and also proven. I think there is a clear path for the commissioner, as articulated in the CBA, to increase the suspension.”

Watson has denied the allegations made in 25 civil lawsuits filed by women. He has agreed to settlements in 23 of those cases, according to the attorney for the women. One lawsuit was withdrawn, and one remains pending. Watson has not been charged with a crime. The NFL’s personal conduct policy allows for discipline to be imposed without criminal charges.

The NFLPA did not respond to a request for comment Tuesday. The union has had mixed success challenging the NFL in court over player discipline. In cases involving quarterback Tom Brady, then with the New England Patriots, under integrity-of-the-game rules and Dallas Cowboys tailback Ezekiel Elliott under the personal conduct policy, the NFLPA scored initial wins that postponed the onset of each player’s suspension. But the NFL ultimately prevailed and forced Brady and Elliott to serve their full suspensions, reinforcing Goodell’s authority in player discipline.

Before the 2020 CBA, Goodell was empowered to make initial disciplinary rulings and resolve any appeals under the personal conduct policy. The NFLPA sought to change that arrangement and ideally would prefer a system in which the commissioner makes the initial ruling, then an independent arbitrator resolves any appeal. But Goodell was not willing to surrender the final say in the disciplinary process, and the current system was a compromise struck as part of the give-and-take of collective bargaining. It is being put to an immediate test in a polarizing, high-profile first case. 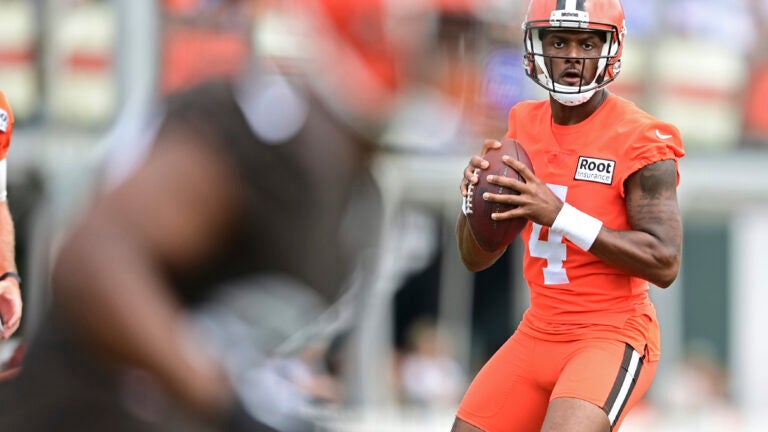