Each day during NFL teams’ training camps this summer, players have headed out to practice fields wearing puffy additions to their helmets that look exaggerated and cartoonish enough to have been designed by the Michelin Man. In the roughly 130-year history of football helmets – from leather skull caps to plastic orbs to single-bar face masks to full face masks – nothing ever has looked quite like the newly mandated Guardian Caps, which are reminders of and hedges against the sport’s inherent dangers.

This year, the NFL required all offensive and defensive linemen, tight ends and linebackers to wear the pillowy, padded shells affixed to the outsides of their helmets in practices until this weekend’s preseason games. According to the league, the spongy additions reduce the severity of an impact by at least 10% if a player involved in an on-field collision is wearing one, and by at least 20% if both players involved are in caps.

In recent seasons, the NFL has made efforts to reduce head impacts and curb the rate of concussions. It has modified rules, encouraged and required the use of better-performing helmets and adjusted training schedules and how playing techniques are taught. This summer, the addition of Guardian Caps has been a conspicuous change for anyone who’s been tuned in to training camps.

“It was different to get used to,” veteran Pittsburgh Steelers defensive end Cameron Heyward said this week at his team’s camp in Latrobe, Pa. “Obviously, they don’t look pretty. When you go to tackle, it almost feels like there’s a pillow on your head.”

Though the caps are an odd sight – modern American gladiator headwear turned into Toad from Mario – they produce a sound even more foreign on a football field than their look. In drills, linemen crash into one another, and what used to be a CLACK! of helmets is now muffled by the crunching of padding. Even so, most players say the lightweight devices made of polyurethane foam have little or no effect on their play.

In Washington, as elsewhere, the caps have received mixed public reviews from those wearing them. Some players who have dealt with concussions, such as Commanders tight end Sammis Reyes, said they appreciate the collaborative efforts by the NFL and the NFL Players Association to promote safety. Others seem less pleased. When a reporter asked Commanders defensive tackle Jonathan Allen about the caps, he said, “No comment.”

Allen, along with the rest of the players at his position, wore the caps through more than three weeks of practices this summer. According to Allen Sills, the NFL’s chief medical officer, the decision for them to suit up in such headgear was data-driven.

“The position groups that were part of the mandate are the position groups that have the highest rate of helmet impact in our data and what we’ve seen to this point,” Sills said in a recent phone interview. “And then, of course, the training camps, that period up to that first preseason game, that’s the highest period for the density of contact, meaning there’s more contact practices during that time than there are any other times during the year. So it makes sense to start with the most vulnerable players in terms of numbers of impacts, and also the most vulnerable time of the year.”

“We want everyone on the field to be safer and all positions to be safer,” Sills said. “But the reason that we started with these position groups is our data suggested they have the highest rate of helmet impacts. So that’s the greatest exposure. And any time you’re talking about vulnerability to injury, you have to start with trying to reduce exposure.”

The goal, Sills said, is not only to reduce the number of concussions players suffer during training camps, but also to reduce the severity of subconcussive impacts that may lead to subsequent issues.

“We believe that there’s a body of work to suggest that fewer blows that happen early in the year may offer a lower concussion rate later in the year as well,” Sills said. “So we’ll keep an eye on that.”

According to the NFL’s data, the number of concussions players suffered in each of the past four seasons is down 25% from the level over the three seasons before that.

Initially, some players hesitated to embrace the caps because they suspected the headgear might hinder their play. Seattle Seahawks tight end Noah Fant called wearing the cap “a little bit of an inconvenience.” Arizona Cardinals defensive end J.J. Watt said he felt “like a bobblehead.” Philadelphia Eagles center Jason Kelce seemed to mock the effort by adding bubble wrap to his helmet, later telling reporters that he was “just having fun.” And Cole Turner, a rookie tight end with the Commanders, asked if he could take off the cap on the first day of camp and was told no. The explanation? It’s a rule.

“I look at everyone else, and I think they look kind of dumb. But I guess I’m one of them too,” Turner said, adding that he usually forgets he’s wearing the cap until he sees his shadow. “My head looks about twice the size as usual – and I already got a big head. So it’s not great.”

Others felt more positively. Commanders linebacker Jamin Davis said he knew the caps weren’t “too distracting or cosmic or nothing” because he’d worn one once while in college at Kentucky. And Keith Ismael, a Washington center, pointed out that the people who would appreciate the caps the most weren’t on the field. He started playing football in the seventh grade, and his mother, Johanna Woodby, always fretted about his head.

In college, Ismael suffered a concussion. He said recently that, though he wishes he would’ve had the cap earlier than in his 12th year playing football, it was better late than never. And he joked that he already knew how his mom would react when he texted her a picture: “[I’ll] be like, ‘Hey, look, safety this year!’ She’ll be like, ‘Oh my God. Thank God. My baby boy!'”

Sills acknowledged that the caps will require a “learning curve for everyone.” But he said the feedback from players, coaches, equipment managers and medical staffs has been positive so far.

“I think that people understand and appreciate the why behind this initiative, and they understand the science behind it,” Sills said. “And obviously players and coaches want to do anything that makes them safer and more likely to be available and less likely to be injured. We’ll continue to compile that feedback. Obviously we’ll be matching that feedback with data – from injury data, but also from sensor data on those players that are wearing sensors, and also video data – and doing a more comprehensive look at the outcomes.”

Sills added that “everything is on the table” in terms of the potential future use of the caps further into the preseason or perhaps during practices in the regular season. And Commanders Coach Ron Rivera, a member of the NFL’s rulemaking competition committee, said he wouldn’t be surprised to see the mandate for wearing the caps expanded in the future to include offseason workouts and potentially practices during the regular season.

“If this comes out and this really helps reduce [the risk of concussions], then I’d imagine we would continue to find ways for player health and safety,” Rivera said.

But some around the game are skeptical about the benefits and feasibility of expanded use. New York Jets Coach Robert Saleh expressed concern that players would grow accustomed to “the soft blow” and use their helmets more, leading to increased risk of head injuries. Reyes, the Commanders tight end, thinks wearing the caps during games won’t happen for reasons economic and soulful. “It’d take some of the fun of football away,” he said.

The NFL regularly has found that whenever it introduces a new safety measure, some players are hesitant to embrace the changes to a sport they’ve played since childhood. But eventually, even if sometimes grudgingly, players have adjusted to everything from penalties for illegal hits to changing their model of preferred helmet. Heyward called the caps “good for our game” as those involved seek “positive ways” for players to avoid head injuries, despite the initial adjustment required.

“We have to continue to evolve the game to reduce head contact overall,” Sills said. “And that means looking at how we’re teaching and coaching, what the rules of the game are in terms of allowable head contact because we believe – and I think we’ve stated very publicly – that we want to see head contact reduced in all facets of the game.” 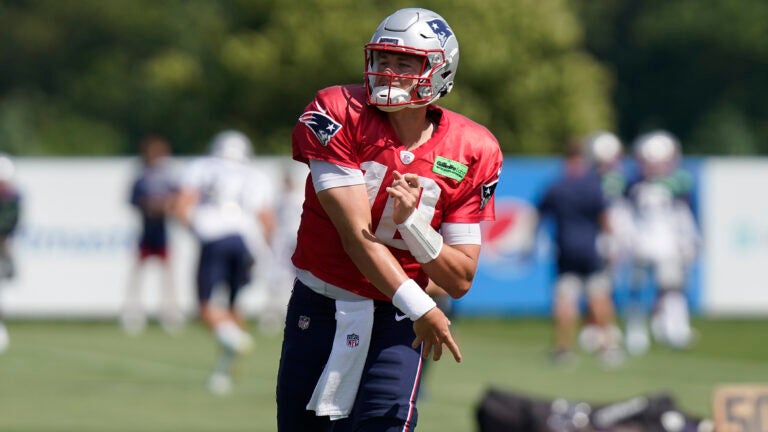 'I think we've ironed out a lot of things': Mac Jones gave an update on the Patriots offense