The San Francisco 49ers tried their best to move on from Jimmy Garoppolo. They drafted and groomed a successor last year. They advertised Garoppolo’s availability to all would-be trade suitors. They even politely excused him from training camp this summer.

Short of changing their phone number and hiding behind drawn curtains when he rang the doorbell at team headquarters, they did everything they possibly could have done to make their starting quarterback feel unwanted.

It didn’t work. Garoppolo, the 49ers’ once and future quarterback, will again be under center after a season-ending ankle injury sidelined his much-anticipated replacement, Trey Lance, last week.

Garoppolo and the 49ers did not choose to remain together in 2022 so much as remaining together chose them. That’s because quarterbacks of Garoppolo’s NFL stratum — game managers, caretakers, plain-and-tall project coordinators — are easy to criticize, but surprisingly difficult to replace.

When the 49ers traded for Garoppolo in October 2017, he was a not-so-young prospect who had spent three years wilting in Tom Brady’s shadow. After a 2018 season marred by injury, Garoppolo “led” the 49ers to the Super Bowl after the 2019 season in the same way a student council president leads a senior class to graduation. With their star-studded defense and coach Kyle Shanahan’s child-proofed game plans, that’s where they were headed anyway.

The 49ers led Kansas City, 20-10, late in Super Bowl LIV, but in the fourth quarter, Garoppolo completed just 3 of 11 passes with an interception, got sacked and had several glaring miscues as Kansas City came back for a 31-20 victory.

When Garoppolo was again injured in 2020, Shanahan’s eye began to wander.

Enter Trey Lance, who arrived in the 2021 draft class with the arm of John Elway, the legs of Steve Young and the NFL readiness of a precocious teenager. Lance left North Dakota State when all but one game of his final collegiate season was postponed because of the COVID-19 pandemic, leaving him with just 17 career starts in college, against lower-level competition.

Lance was a mysterious combination of raw tools, potential and Paul Bunyan tales of long-ago exploits against Montana State. That made him a dangerous controlled substance for a coach and franchise weary of hiding their quarterback’s limitations. The 49ers traded three first-round picks and a third-rounder for the right to pick him.

The 49ers once again embarked on a deep playoff run in 2021, with Garoppolo behind the wheel of Shanahan’s self-driving sports car and rookie intern Lance making some bumbling-but-promising cameos. Garoppolo’s relative success did not matter. The 49ers were committed to Lance for 2022. They even formalized the arrangement with a much-publicized let’s-stay-friends lunch date in late July, when Garoppolo was officially uninvited to training camp.

The 49ers were motivated sellers, but no trade partners emerged for Garoppolo. Most quarterback situations around the league had already been settled. Rumors that Garoppolo “ghosted” the 49ers by not returning calls or texts every offseason did not exactly increase his marketability, nor did the $24.2 million he was due in the final year of his contract.

NFL teams also tend to remain devoted to their own middling game-managers and are suspicious of those who reach the trade market. Quarterbacks like the Minnesota Vikings’ Kirk Cousins and Las Vegas Raiders’ Derek Carr putter along for years despite failure to lead their teams to playoff success, their hefty contracts reflexively extended thanks to the same inertia that keeps cable companies in business: It takes less effort to overspend for moderate disappointment than to risk trying something new.

But trade for someone else’s overcompensated disappointment? Don’t be silly.

With the regular season looming, the 49ers were faced with two choices: release Garoppolo, absorbing his salary and leaving themselves without a veteran insurance policy behind Lance; or make the best of an extremely awkward situation. They chose the latter.

A season that had the makings of a comic soap opera instead became a tragedy when Lance, coming off a shaky season-opening loss to the Chicago Bears, fractured his right ankle and sustained ligament damage in the first quarter of Sunday’s game against the Seattle Seahawks. Garoppolo stayed out of his defense’s way in a 27-7 victory.

Lance underwent surgery Monday and is out for the 2022 season. The 49ers are Garoppolo’s team, sort of, again.

Look beyond 2022, and the 49ers have nothing to show for their costly succession plan but an injured prospect who has barely played any football in three years, a veteran who will leap at his first chance to escape his marriage of convenience in free agency, no first-round picks in 2023 and the type of embarrassment typically associated with begging an ex-partner to move back in to help you cover the rent. 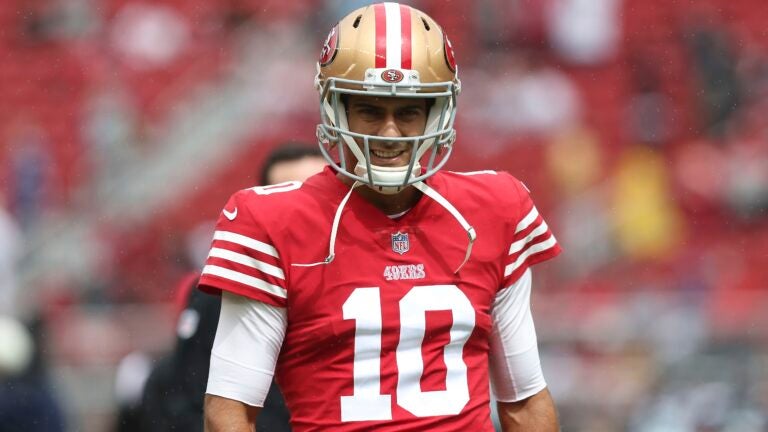