INGLEWOOD, Calif. (AP) — Justin Herbert didn’t throw a touchdown pass for the first time in 27 games. For once, it didn’t matter thanks to the Los Angeles Chargers special teams.

Dustin Hopkins kicked four field goals, including a 39-yarder with 2:38 remaining in overtime, as the Chargers rallied for a 19-16 victory over the Denver Broncos.

Hopkins, who injured a hamstring during the first half, grimaced as he kicked the ball and fell to the ground before being picked up by teammates. The ninth-year kicker was inactive for last week’s game against Cleveland due to a quadriceps injury.

Hopkins’ heroics were set up when Deane Leonard recovered a muffed punt at the Denver 28-yard line.

Herbert, who is still recovering from fractured rib cartilage from a hit one month ago, appreciated Hopkins being able to gut it out.

“We’ve got so much respect for him. For him to go out there and play and put up with some pain like that, it was great to see,” said Herbert, whose 56 attempts without a TD pass is an NFL record in a win.

Coach Brandon Staley said Hopkins’ hamstring kind of cramped up early, but started to loosen up during the second half.

“You can’t say enough about him hanging in there,” Staley said. “At the end we had no choice. We were going to kick no matter what.”

Hopkins has five games with four or more field goals. It is also the first OT game-winner of his career.

“I was trying to focus on a little backswing and just get through the ball. And that was it,” Hopkins said. “I wasn’t thinking about the circumstance or anything like that.”

The Chargers have won three straight to improve to 4-2. They are tied with Kansas City atop the AFC West. It is the first time in franchise history they have rallied from a double-digit deficit at the end of the first quarter to win.

Los Angeles was down 14-3 at the end of the first quarter last Sunday in Cleveland before pulling out a 30-28 win.

This game appeared to be headed toward a tie until Denver’s Montrell Washington muffed JK Scott’s punt at the Broncos 32-yard line. It was recovered by Deane Leonard at the 28.

“I just saw the returner running up, he was kind of relaxed, and then his teammate was just standing there,” Taylor said. “At first, if you go back, I paused a little bit, and then it just clicked in my head like, ‘Oh, just throw him onto the returner.’ And it happened, and the ball came out.”

Herbert, who completed 37 of 57 for 238 yards and an interception, passed to Mike Williams for 9 yards on third-and-12 from the Denver 30 to get Hopkins closer.

Russell Wilson was 15 of 28 for 188 yards and a touchdown for the Broncos (2-4), who dropped a game in overtime for the second straight week.

“We felt like we could have won the game, and then we had the fluke play at the end. It didn’t work out, but everybody is together,” Wilson said.

Denver jumped out to a 10-0 lead with scores on the first two drives. Brandon McManus was good from 51 yards midway through the first, and Wilson found a wide-open Greg Dulcich for a 39-yard touchdown with 1:49 remaining in the quarter.

Dulcich’s TD was the first of his career and the Broncos’ first in 87 minutes, 54 seconds.

The Chargers answered on their ensuing possession, putting together a 15-play, 82-yard drive that was capped by Austin Ekeler’s 6-yard run up the middle with his linemen helping him get across the goal line.

Following a Denver three-and-out, Los Angeles evened it at 10 on Hopkins’ 37-yard field goal with 53 seconds remaining in the half.

The Broncos were not content to run out the clock though. KJ Hamler hauled in a 47-yard pass to the LA 28. Denver got to the Chargers 9 before McManus was good from 27 yards.

The Chargers tied it on their first drive of the third quarter when Hopkins split the uprights from 31 yards.

The teams traded field goals in the fourth quarter. McManus was good from 48 yards after Baron Browning picked off Herbert. The Chargers answered with Hopkins making it from 35.

“This is very disappointing,” Denver coach Nathaniel Hackett said. “We had some opportunities there, and we’ve got to execute at a higher level. We’ve got to come up with some better plays.”

Herbert had a 26-game TD pass streak snapped. It was the third-best run in franchise history and second-longest active streak in the league.

The teams combined for 19 penalties and a season-high 240 yards. The Broncos were flagged 10 times for 151 yards, the 24th time since 2000 a team has drawn more than 150 penalty yards, according to TruMedia.

The Broncos had four pass interference calls for 87 yards.

Ron Torbert’s crew had been conservative coming into the game. In their four previous contests this season, they averaged 12 flags for 92.8 yards.

Chargers: RB Joshua Kelley suffered a knee injury in the first quarter and did not return. 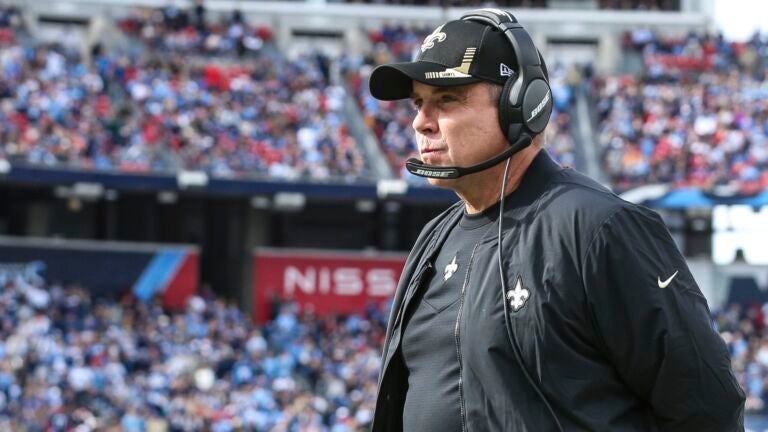 AP source: Broncos get Sean Payton as coach in deal with Saints