The questions swirling around the Washington Capitals’ goaltending situation began before the season even started. There was an idea of who would be No. 1 in net, but with the signing and then absence of Henrik Lundqvist because of a heart condition, the Capitals were left with two young netminders: sophomore Ilya Samsonov and rookie Vitek Vanecek.

Veteran goalie Craig Anderson then signed a one-year deal with the upfront assumption he would be taking a back seat in the Capitals’ plans. The 39-year-old only made four appearances (with two starts) during the regular season.

Now, roughly four months later, with Game 1 of the Capitals’ first-round playoff series against the Boston Bruins starting on Saturday, the question over who will handle goalie duties continues to loom. Washington still has not publicly announced its Game 1 starter.

Do they go with the rookie with no playoff experience who led them through multiple injuries and absences early in the year; an up-and-down first-round draft pick whose status is still unclear for the postseason; or the veteran with almost zero game action this season?

Vanecek (21-10-4 with a 2.69 goals against average) appears to have the edge, but as of Thursday afternoon, Capitals Coach Peter Laviolette said the team is keeping that decision internal ahead of the postseason. However, when asked about the comfort level of putting a rookie in net, he said it didn’t faze him.

“I think that once you are with someone for a year and you’ve played the game and you’ve counted on them, this is our team,” Laviolette said. “Vitek had pressure early on when he had to carry the ball by himself . . . he did a terrific job.”

Also uncertain for Saturday’s playoff opener is the status of winger T.J. Oshie, who missed the team’s season finale on Tuesday after suffering a lower-body injury last week, although there was some encouraging news on Thursday. He took part in individual skating drills before practice and participated in a portion of the team practice while wearing a noncontact jersey. Oshie remains day-to-day with the injury.

Saturday’s Game 1 decision in net is complicated by the current absence of Samsonov. The netminder has not been on the ice or at practice for more than a week after ending up on the league’s covid-19 protocols list with Evgeny Kuznetsov for the second time this season.

The league does not make public why players end up on the covid-19 list.

The first time Samsonov and Kuznetsov were on it, both tested positive for the coronavirus. Both experienced multiple symptoms and it took Samsonov nearly six weeks after testing positive to get another NHL start. If Kuznetsov and Samsonov are healthy, their recovery time will undoubtedly be quicker this time. When Alex Ovechkin and Dmitry Orlov were on the covid-19 list because of contact tracing, they spent 10 full days on the list before returning to practice.

Taking Samsonov’s potential emergence off the table for Saturday, the two options are Vanecek and Anderson. Former goaltender Kevin Weekes said he thinks Vanecek deserves the initial nod, but that the team should assess things on a game-to-game basis.

“I think [Laviolette] understands the value of both, of the youth and the veteran experience and calm and steadiness,” Weekes said. “Listen, they are in a great position just based on matchup flexibility, they are in a good position right now. If you were to have come into the season and said, ‘Hey, Hank is your guy,’ and now he is on the healing track and the Caps are where they are, it is pretty remarkable.”

Weekes said he has liked what he’s seen in Vanecek’s progression this season, with his improved ability to know when to be aggressive in net and when to be more conservative.

Additionally, both stylistically and physically, Weekes sees Vanecek as similar to Jaroslav Halák of the Bruins. Both are a little undersized for the goalie position, but tend to play bigger than they are, according to Weekes.

“This year he got to play a lot as if he were on a bottom-feeder team, but he is playing for a Stanley Cup contender,” Weekes said of Vanecek. “It’s like the best of both worlds. He is getting the games and he is getting the support and he is around future Hall of Famers and all things being equal, he has played exceptionally well for me. Really, really good year.”

Anderson is the other option for a Washington team with little room for error. He’s been with the taxi squad for the majority of the season, practicing with the extras and staying prepared in case called upon.

“You got to be ready for anything, that is kind of been the mentality for the last little bit,” Anderson said. “You don’t know when you are going to get in and when you do get in you want to do the best job you can.”

The veteran has also acted like a mentor for the two young Capitals’ goalies this season. He said he’s tried to interact with them and ask how they are feeling or dole out advice nearly every day.

Despite the lack of game action, Anderson said he hasn’t felt any frustration this season. He’s used practice to continue to stay engaged and talked to family every day. And while it’s been “tough” for him to be away, he said he owes his family a lot once the season comes to an end.

“I will be doing a lot for them, changing the world that way,” Anderson said.

For now, Anderson will stay ready in case he’s called upon, with the postseason only days away. 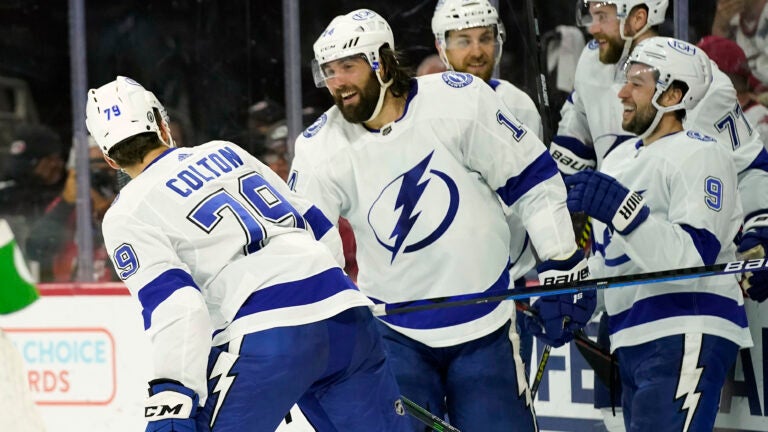