The Ethiopian marathoner crouched down low in the hallway at the Miami airport as he carried a bouquet of red roses.

Feyisa Lilesa’s daughter spotted him first and ran in for a hug. Then, his young son and lastly his wife.

On Valentine’s Day, the Olympic silver medalist who became an international figure when he crossed his wrists in protest at the finish line in Rio de Janeiro finally reunited with his family. He was a little late (traffic), but what’s a few extra minutes when he’s already waited six long months to see them.

As he made his way out of the airport, his daughter rode on the luggage and his son perched on his shoulders, carrying the flowers he brought as a gift.

‘‘The biggest gift is us seeing each other again — and me seeing them again,’’ Lilesa said through a translator in a phone interview Tuesday. ‘‘It’s all been very tough.’’ 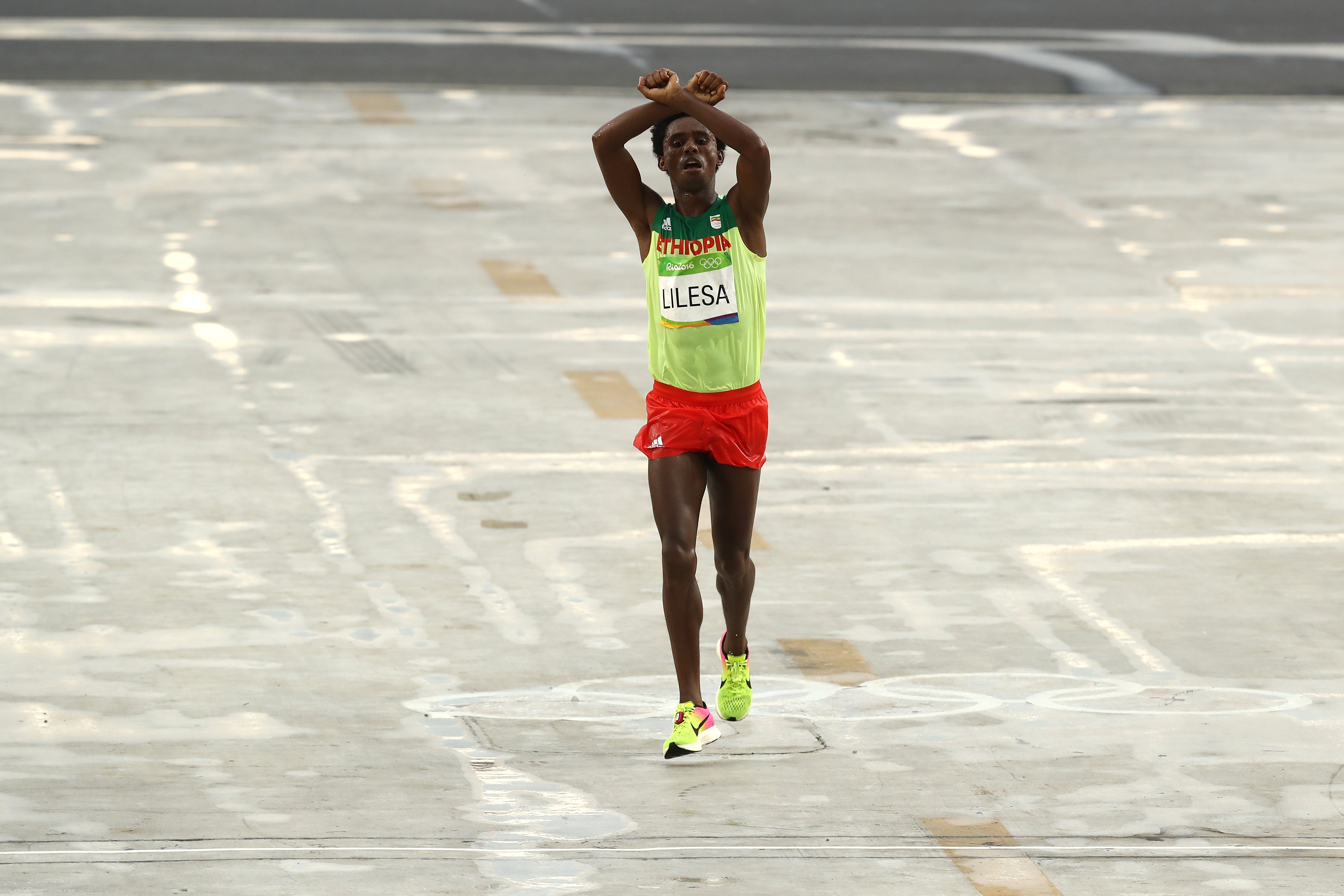 The 27-year-old eventually settled in Flagstaff, Arizona, after making an anti-government gesture during the Olympic marathon that drew global attention to the deadly protests in his home region of Oromia. He never returned home after Brazil out of fear of what might happen to him. He’s constantly been worrying about the family he left behind in Ethiopia. His nearly 6-year-old daughter, Soko, and 3 ½-year-old son, Sora, always asked when they will see him again.

Finally, he was able to answer.

Lilesa remains in the U.S. on a special skills visa. His family arrived on visas as well, secured through his attorney.

The plan now is this: A few days of beach time and then it’s off to Flagstaff where the family will settle into everyday life in their rental house.

One weight off his mind.

Since his gesture, many have described Lilesa as a national hero.

Most days since his arrival in America have been spent training. It was his best cure for loneliness.

‘‘I come from a very big family, and I’ve never lived alone,’’ Lilesa said. ‘‘I’ve always been surrounded by people I know. This has been the complete opposite. Here, I’m removed from all of that.’’

Still, he would protest all over again.

‘‘I think me taking the risk and putting family in that position and putting them potentially in harm’s way, it was a good lesson for a lot of people that you need to sacrifice in order for you to win some concessions and change your situation,’’ Lilesa said. ‘‘In that sense, it inspires people to fight for their rights and resist the government in Ethiopia. It also led to greater awareness about the situation in Ethiopia.

‘‘Now, you see more coverage of the human rights violations. I speak with people wherever I go. Even outside the media limelight, people are interested in knowing. They heard the story because of my protest.’’

Someday, he would like to go back to Ethiopia.

‘‘But as long as this current government is in power, I don’t have hope of going back to Ethiopia,’’ he explained. ‘‘I do know change is inevitable.’’

He also wants to compete at the 2020 Tokyo Olympics. Whether that’s wearing the colors of Ethiopia, he doesn’t know.

‘‘I’m not too hopeful the system will be changed in the next three years and I will be in a position to run for Ethiopia. We will have to wait and see,’’ said Lilesa, who plans to run in the London Marathon in two months.

For now, Lilesa’s priority is getting his family settled.

‘‘I knew that we would meet somehow, but I didn’t expect it would happen under these circumstances over here,’’ Lilesa said. ‘‘When I think about my family, it takes me back to why I did this and why I’m here. I missed my family, but this was a big bother to me — the plight of my people.’’

AP Photographer Wilfredo Lee in Miami contributed to this report.