PYEONGCHANG, South Korea (AP) — The words left Liz Swaney’s lips without an ounce of irony. No telling curl of the lips. No wink. Nothing. She meant them. All of them.

“I didn’t qualify for finals so I’m really disappointed,” the 33-year-old Californian said after coming in last in the 24-woman field during Olympic women’s halfpipe qualifying on Monday.

How freeskier Elizabeth Swaney made it to the #WinterOlympics with this very simple halfpipe run: https://t.co/enfDyoQjGC pic.twitter.com/kHTAV7XND4

Even though her score of 31.40 was more than 40 points behind France’s Anais Caradeux, whose 72.80 marked the lowest of the 12 skiers to move on to Tuesday’s medal round.

Even though Swaney finished in about the same position in each of the dozen events she competed across the globe over the last four years in the run-up to the Pyeongchang Games.

Even though her two qualifying runs at Phoenix Snow Park featured little more than Swaney riding up the halfpipe wall before turning around in the air and skiing to the other side. It was a sequence she repeated a handful of times before capping her final trip with a pair of “alley oops”, basically inward 180 degree turns more fitting for the local slopes than the world’s largest sporting event.

Halfpipe is judged on a 100-point scale. Swaney has yet to break 40 in an FIS-sanctioned competition, not because she regularly wipes out trying to throw difficult tricks but because she doesn’t even try them.

Yet she’s here in South Korea anyway as part of the Hungarian delegation, the latest in a series of quixotic pursuits that include running for governor of California as a 19-year-old student at Berkeley to trying out for the Oakland Raiders cheerleading team to mounting a push to reach the Olympics as skeleton racer for Venezuela. She only started skiing eight years ago and only got serious about it after the skeleton thing didn’t take.

“I still want to inspire people to get involved with athletics or a new sport or a new challenge at any age in life,” she said.

A tale that’s hardly new, though Swaney’s unusual path offers a Rorschach test of sorts on what the Olympics actually mean.

The games have long trafficked in the soft-focus narrative of plucky dreamers with no shot. Think Eddie “The Eagle” Edwards, the bespectacled British ski jumper; the Jamaican bobsled team or relentlessly shirtless Tongan Olympian Pita Taufatofua , who came in 114th out of 116 skiers in the 15-kilometer cross-country race last week.

Korea entered 19-year-old Kyoungeun Kim in women’s aerials earlier in the Games, the first skier from the host country to take on the event at the Olympics. Kim came in dead last while going off the smallest of the five “kicker” ramps used at the Games, the back flip she completed in the second round akin to something a teenager might do off a diving board at the neighborhood pool.

Taufatofua and Edwards embraced the uniqueness of their stories, fully allowing they were simply happy to be at the Olympics and nothing more. Kim represented Korea’s first foray into the sport. All three of them competed for the countries they were born in.

Let’s get this out of the way early: She did nothing illegal to get here. She racked up the required FIS points to reach the Olympic standard. She went through the necessary hoops to join Team Hungary, the connection coming from her Hungarian maternal grandfather, who she said would have turned 100 on Tuesday. She’s spent more than her fair share of money hopscotching continents chasing a dream she says was hatched watching the 1992 Games.

It was not easy and it was not cheap. Yet she kept at it. Keeping at it is kind of her thing. No matter how you try to frame the questions, the answers come back the same. She swears this isn’t a publicity stunt. This is real.

“I’m trying to soak in the Olympic experience but also focusing on the halfpipe here and trying to go higher each time and getting more spins in,” said Swaney, who wore bib No. 23 and stars-and-stripes goggles not as some sort of statement but basically because they were the least expensive in the athlete’s store.

Canadian Cassie Sharpe packed more twists into the first two tricks of her qualifying-topping run than Swaney did all day. In an event making its second Olympic appearance, one focused on progression and pushing the edge, Swaney’s tentative, decidedly grounded trips down the pipe play in stark contrast to everyone else.

The English language announcer stayed largely quiet during Swaney’s second run because, well, there wasn’t much to describe. As Lady Gaga blared over the speakers, the crowd watched in silence for sparse applause at the end. The judges awarded her for doing back-to-back “alley oops,” with the American judge even giving her a 33. It was better than her first, but it was nowhere near world class.

Swaney is here because she earned her way in.

Still, it leads to the inevitable question: should she be?

The women who came through the mixed zone before her, women who flung themselves into the South Korean sky while Swaney took a decidedly lower-altitude approach, say “yes.”

“I’m a pretty open-minded person,” said France’s Marie Martinod, a silver medalist in halfpipe in Sochi four years ago. “So I couldn’t be proud dealing some pins with some crazy exotic country and being giving (criticism) to this girl that is trying to get into the Olympics. No, she’s part of the game. It’s a game, just (a chance) to share stuff and be able to see the whole world (come) together for once.”

While Swaney — whose LinkedIn profile highlights three undergraduate degrees from Cal-Berkeley, a master’s in Real Estate Development and Finance from Harvard and funds her pursuits while working for a pair of Bay Area startups — points out she was just one of 24 women in the world to make it to Pyeongchang, part of the reason is due to IOC rules that limit the number of athletes a country can enter in a given sport.

Four Americans entered the contest, with three moving on to the finals. The one who didn’t make it? Devin Logan, a two-time Olympian who scored 71.60 in her first run to just miss the cutoff while dealing with a knee injury.

At least Logan was in the conversation. Swaney wasn’t. And she hasn’t been. And she likely won’t be anytime soon.

Sharpe, who will go last in the finals and revels in pushing the boundaries each time she drops in, isn’t sure being competitive should matter. Even at the Olympics. 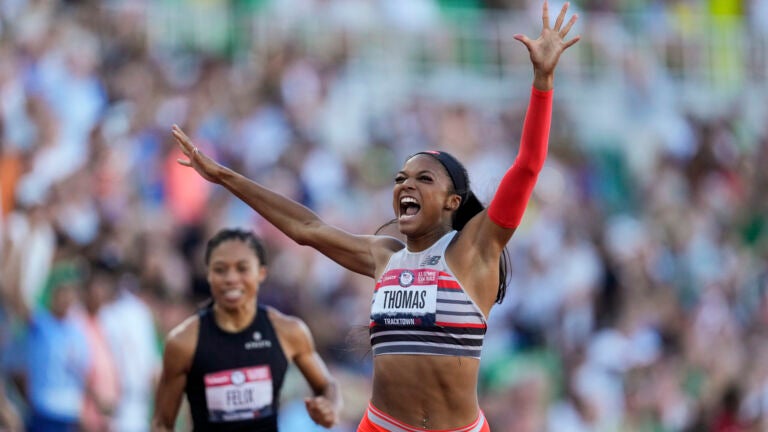