It took 80 minutes of hockey and six rounds of a shootout to separate Team USA and Team Canada, but when the tossed gloves landed and the pile of bodies on top of Maddie Rooney cleared, it was the Americans wearing gold.

Rooney stopped four shots in the shootout to put Team USA atop the podium for the first time since 1998, ending a string of three straight gold-medal round defeats against their arch-rivals from the north.

Thirty-eight years to the day since the “Miracle on Ice” victory over the Russians at Lake Placid, the US women jumped over the boards and piled on top of their 20-year-old goaltender after she turned away the final Canadian chance. Rooney’s save followed Jocelyne Lamoureux-Davidson’s forehand-backhand-forehand-back-of-the-net shootout winner, which will be played on a loop until these teams inevitably meet again at Beijing 2022.

Here’s how the US women’s hockey team gave us the most exciting moment of the Olympics:

Team USA was denied on its first two power plays before Hilary Knight put a beautiful redirect past Shannon Szabados on the American’s third man advantage. Knight’s goal came with 25.4 seconds left in the first period, but the lead didn’t last long into the second as Marie-Philip Poulin and Haley Irwin both tallied for the Canadians.

The score remained 2-1 until Monique Lamoureux tied the game with 6:21 to play. Lamoureux took advantage of a big save by Rooney and a poor line change by the Canadians to finish on a breakaway.

After Team USA killed a penalty to keep the game scoreless at the end of overtime, the teams went to a shootout. Some viewers were not happy to see such a spectacular spectacle end in that fashion.

The first five rounds of the shootout weren’t enough to break the deadlock between the only two teams to ever win an Olympic gold medal in the sport, but Lamoureux-Davidson was. She skated a long, winding path toward Szabados, then threw together a dazzling series of feints that left the Canadian goalie sprawled on the ice and the puck in the back of the net.

“I’m digging this new necklace I got today,” Jocelyne Lamoureux-Davidson said. “I’m not taking it off for a while.”

Rooney stood tall on the next Canadians effort, denying Meghan Agosta at the doorstep. Her teammates climbed over the boards and rushed to celebrate the first American gold medal in 20 years. In addition to the medal, Rooney earned a promotion as she became the United States Secretary of Defense according to Wikipedia.

The @usahockey women take down rival Canada for their first gold since 1998! #WinterOlympics #BestOfUS https://t.co/wS6s9ulmoA pic.twitter.com/o4gJr8g7sV

Kali Flanagan, of Burlington and Boston College, might have summed up the U.S. team’s emotions Thursday morning with a simple tweet.

Danver’s Meghan Duggan tweeted that the gold medal was the “Greatest honor of our lives.” A certain number 12’s company tweeted their congratulations, which understandably drew exclamation points from the U.S. forward.

And Hilary Knight, whose early goal put Team USA on track to end the gold-medal drought, thanked the fans for keeping the faith.

This one was for YOU.
THANK YOU for believing in us!!!???
#TeamUSA #Olympics #Gold pic.twitter.com/HKHLPKgtE8

Silver was not the color Team Canada came to Pyeongchang for, and Jocelyne Larocque did not hide her disappointment as she quickly removed the second-place medal.

Our newest American heroes: The US women’s hockey team

More than half of the US women’s Olympic hockey team has Mass. connections 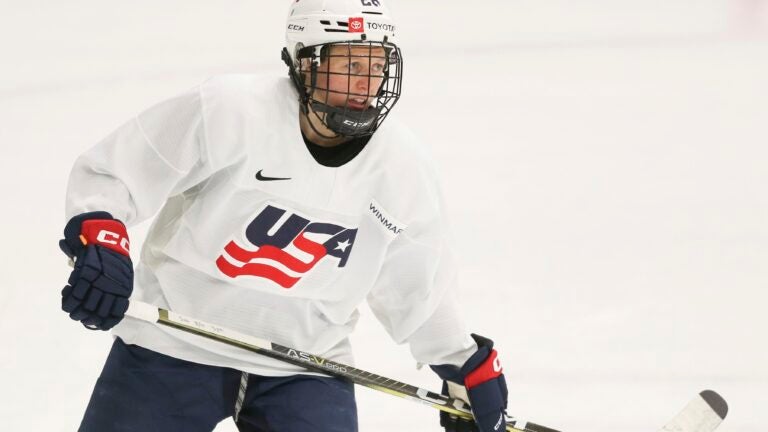