All 23 members of the U.S. women’s hockey team appeared on “The Ellen DeGeneres Show” Tuesday wearing the gold medals they earned in a thrilling victory over Canada at the Winter Olympics.

Team USA stood atop the podium for the first time in two decades after defeating their arch-rivals. Gigi Marvin, a forward who plays for the Boston Pride, told DeGeneres, “We wanted to come back with the gold for you.”

“Well you wouldn’t be sitting here if you hadn’t,” the host jokingly responded.

In their first interview since they returned from Pyeongchang, the team discussed the emotions they felt during the epic shootout, their wage dispute with USA Hockey, and their grueling training regiment.

Maddie Rooney was the hero in South Korea, denying Canada’s final chance in the shootout to close out the victory. DeGeneres asked the 20-year-old college star at Minnesota Duluth how she handled the pressure with the game on the line.

“I’m actually pretty much a scaredy cat,” Rooney said. “But when it comes to goalie, it’s important to stay calm. Looking over to the bench and seeing my teammates with all their energy and seeing their support made it so much easier and confident back there.”

Last spring, the team that would eventually claim the gold medal was locked in a battle with their own organization as they fought for equal treatment. The team threatened to boycott the International Ice Hockey Federation world championships if USA Hockey did not make changes.

“We’d seen things or experienced things and enough was enough,” said team captain and Danvers native Meghan Duggan. “We put a world championship on the line and said we wouldn’t attend if we didn’t see some major cultural changes in our program, in regards to women being treated with a little bit more respect.”

Just three days before the tournament began, the two sides agreed to a new contract that increased the players’ wages, raised the travel perks to the same level as the men’s team, and paid the players beyond just the six-month Olympic period.

“We try to motivate people through sport and inspire and continue the dialogue for equality,” teammate Hilary Knight said. “But we needed to prove our worth, too, and came back with a gold. So we’re pretty excited about that.”

Knight, who plays for the Boston Pride and intends to use her platform to grow the sport, said that the team’s training demands a well-balanced diet (and plenty of yogurt).

“We have a very rigorous training schedule,” she said. “Seven days a week. It’s wild.”

Team USA came bearing gifts for DeGeneres. They gave the talk-show host a hockey stick autographed by every member of the team, as well as a jersey with her name on the back.

“Now I have to learn how to play hockey,” DeGeneres joked.

She had a gift of her own for the Olympic heroes. The 23 gold-medal winners looked on as a Team USA jersey was raised onto the wall in the show’s set, where it will stay.

“Thanks for standing up for equality and showing that we’re supposed to be treated equally,”DeGeneres told the team. “Sometimes you just have to stand up and fight for it and then they say ‘yeah, OK.'” 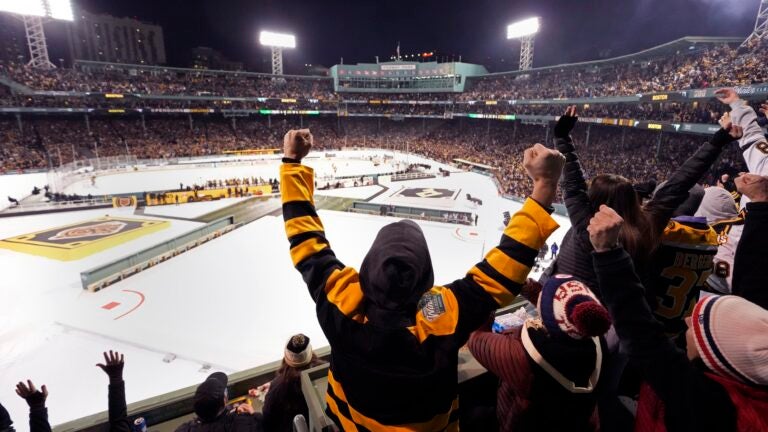 Is the Winter Classic losing its luster? Not for the Bruins – and 39,000 fans at Fenway Park.