For Massachusetts-based fans of the Olympics, perhaps the most notable name in Tokyo will be 24-year-old sprinter Gabby Thomas — a Western Massachusetts native who posted an eyebrow-raising time at the U.S. Trials last month.

Here are six things to know about the Harvard graduate.

Thomas was born in Atlanta but moved to Western Mass. as a child

Thomas and her twin brother Andrew were born in Atlanta. When Thomas was seven, her mother Jennifer Randall accepted a job at the University of Massachusetts and moved the family to Belchertown. Later, they moved to Florence — a village connected to Northampton — before Thomas’s seventh-grade year so that she and her brother could attend prep school at Williston Northampton.

“People are so confused like, ‘Where are you from?’ ” Thomas told the Daily Hampshire Gazette in 2019. “Western Massachusetts. I love having that background, being me.”

Thomas had a nerve-wracking health scare earlier this year

In May, Thomas went to get an MRI on her lower back, hoping to get some answers regarding the “relentless” pain she experienced in her hamstring. Doctors came away with a disturbing discovery: Thomas had a tumor on her liver.

Thomas said she wasn’t panicked at first, aware that the tumor could be benign and that even if it wasn’t, doctors found the tumor early. But as the wait dragged on, she began to worry.

“The more I started talking to doctors, the more they started saying the word ‘cancer,'” Thomas told the Washington Post last month.

“I remember telling God, I was like ‘If I’m healthy, I’m going to go out and win trials,’” Thomas told “My New Favorite Olympian.” “If this is not cancer, I will make this team.'”

The tumor — fortunately — was benign, and Thomas upheld her end of the bargain with God by making the Olympic team in an impressive manner.

Thomas was floored by her own performance in the trials.

“Here’s the young lady I think is the favorite,” one announcer said when Thomas’s name was announced in Oregon, moments prior to the race.

Still, nobody expected her to cross the finish line in 21.61 with her hands held high in the air — a move that added a few tenths of a second to a time that was the second-fastest in world history. The only runner to finish a 200 faster is legendary sprinter Florence Griffith Joyner, better known as Flo-Jo, in 1988.

“I blacked out during that race,” Thomas told NBC Sports after she finished. “I know beforehand I wanted to focus on accelerating through the first 100 and keep the momentum — come off the turn feeling really good.

“I am still in shock. I can’t believe I put up that time. Definitely has changed how I view myself as a runner.”

During the pandemic, Thomas opted to head to the University of Texas to continue her training and work on her Master’s degree in epidemiology.

Austin presented one new challenge many recent college graduates experience: Thomas has to cook for herself now.

“I came from college where I was eating in the dining halls,” Thomas told Runner’s World. “When I first got here, I was eating out a lot. I would say I was at a C-minus; now I’m probably at a B-plus. I’ve cut out processed foods, limited eating out, and I’m not living in the frozen food aisle.”

Randall told “My New Favorite Olympian” that Thomas used to eat a bag of chips before blowing her competition away in high school. Thomas had to adjust to the rigors of Division I athletics.

Now, Thomas has had to learn how to cook, and she isn’t a huge fan.

“But I bought an air fryer, and it’s been my best friend,” she told Runner’s World. “My favorite thing to cook is salmon and asparagus, or chicken wings. My go-to salad is a kale salad — I love kale, so that’s a vegetable I can eat consistently.”

Thomas has a pug named Rico

When Thomas gets home, she will be greeted by a fan who doesn’t care about racing.

Thomas remembers taking a class at Harvard called “Sick and Tired of Being Sick and Tired” — named after a phrase popularized by civil rights activist Fannie Lou Hamer in the 1960s. In that class, she learned about the healthcare inequalities experienced by Black people in the U.S.

“It really changed my life and shaped my time at Harvard, because ever since taking that course, I thought of everything I was learning in that lens,” Thomas told the “My New Favorite Olympian” podcast.

Learning about the Tuskegee Syphilis Project — in which government scientists studied the effects of untreated syphilis on Black men long after an effective treatment emerged — enraged Thomas. At one point, she called her mother, Randall.

“This class is starting to make me angry,” she told Randall.

“I recall saying, ‘Yeah, you absolutely should be,'” Randall said on the podcast.

Now, Thomas wants to improve the systems that have failed Black people for decades.

“I do know at some point, I want to use my MPH and go into healthcare administration and run a hospital and eliminate all these disparities and just save the world basically,” Thomas said.

Correction: An earlier version of this story incorrectly listed Gabby Thomas’s age as 25. We regret the error. 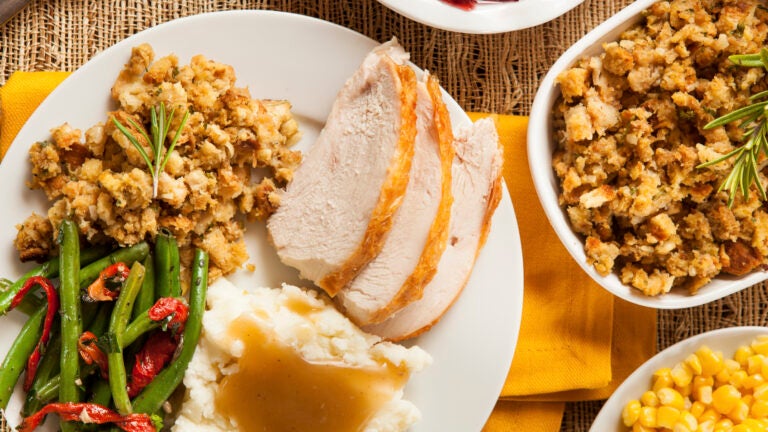