The Summer Olympics in Tokyo are finally here after being postponed from 2020 because of the pandemic.

While the Opening Ceremony is on Friday, July 23, the Games actually began Wednesday (Tuesday night in the US) when softball and women’s soccer got under way.

The Games will conclude on Sunday, Aug. 8. The 33 sports and 339 medal events make it the biggest Olympics to date.

Here’s what you need to know about the Olympics:

What is the time difference with Tokyo?

When are the Opening and Closing Ceremonies?

The Opening Ceremony is Friday, July 23, at 6:55 a.m. The Closing Ceremony is Sunday, Aug. 8, at 7 a.m. Both will air live on NBC. The Opening Ceremony will be broadcast again by NBC on Friday in prime time. WNBA star Sue Bird of the women’s basketball team and Eddy Alvarez, an infielder on the baseball team, were selected as the flag bearers for Team USA.

How can I watch?

NBC carries the Olympics again this year, offering 7,000 hours of coverage on six cable networks, and multiple digital platforms, serving both English- and Spanish-language viewers. You can also watch the Games on the streaming service Peacock, NBCOlympics.com, and NBC Sports. Peacock’s programming is free, except for live coverage of USA men’s basketball, which will be available to Peacock Premium subscribers.

There are four new sports — karate, surfing, skateboarding, and sport climbing. Baseball and softball are making a return to the Olympics for the first time since 2008.

Karate will consist of two events: kata and kumite. In kata, the athletes perform by themselves, executing a series of movements for which they are judged on strength, speed, rhythm, balance, and power. In kumite, two competitors face off and are awarded points when they land punches, strikes or kicks with good form, power, and control on the target area of their opponent’s body.

There are two events for skateboarding as well: park and street. The street course will have stairs, ramps, and rails for riders to put together a series of tricks. Skaters are scored on the difficulty of their tricks, speed, height, and originality. The park course is bowl-shaped, with riders building momentum on the inclines to get air and perform tricks.

For surfing, multiple athletes compete at a time, with heats lasting 20 to 25 minutes. Each wave can only have one rider. The surfers are judged on the difficulty of the moves they perform.

Sport climbing consists of three disciplines: speed climbing, bouldering, and lead climbing. In speed climbing, two athletes are secured to ropes and race each other up a 15-meter wall. Bouldering walls are shorter — 4 meters — and the climbers are not secured. They try to climb as many fixed routes as they can in four minutes. In lead climbing, secured athletes climb as high as they can on a 15-meter-high wall within six minutes. If two people reach the same height, the person who did it faster wins.

Where do we even begin? There will be no spectators at any of the events, with the Japanese government extending Tokyo’s state of emergency through Aug. 22. The final stages of the torch relay have been removed from Tokyo’s main streets.

The medal ceremony will look different as well. Olympic officials will not be draping the medals over the athletes’ necks. Instead, the medals will be paced on a table for the competitors to retrieve while not making contact with the presenters. The athletes will then remain on their podiums during the ceremony, and group phots will not be allowed.

Not every Olympian has to be vaccinated, but they all have to be tested regularly and follow mask and social distancing guidelines. There will be daily testing, restrictions on movement within and outside of Olympic venues, with dedicated vehicles shuttling athletes to and from venues to avoid public transportation.

If an Olympian tests positive, they will be given a second confirmatory test, the results of which take three hours. If that turns out to be positive, they will likely be removed from competition, and contact tracing will begin to determine if any other athletes or coaches would have to quarantine.

Athletes already are being forced to withdraw, including US Olympians Coco Gauff (tennis) and Bradley Beal (men’s basketball).

Athletes won’t be allowed to explore nightlife, nor will they be able to throw parties in the Olympic Village once their competition is over, making for a very different experience from past Olympics.

What to watch for

· Simone Biles and the rest of the US women’s gymnastics squad are heavy favorites to repeat as gold medalists. Gymnastics will be held July 24 to Aug. 3, with NBC airing much of it in prime time. The women’s team final is Tuesday, July 27. Biles, 24, again will look to capture the all-around final on Thursday, July 29.

· The winner of the women’s World Cup has never captured gold in the following Olympics. The No. 1-ranked US squad, led by captain Megan Rapinoe, will be looking to buck that trend. It will not be an easy task, as the team lost its opening game on Wednesday to No. 5 Sweden, 3-0. The gold medal game will be Thursday, Aug. 5.

· Track and field runs from Friday, July 30 through Sunday, Aug. 8. Sprinter Allyson Felix is participating in her fifth Olympics, and first since giving birth to daughter Camryn. The nine-time Olympic medalist could become the most decorated Olympian in women’s track and field history. She will be competing in the 400 meters (final on Friday, Aug. 6), the women’s 4 x 400-meter relay (final on Saturday, Aug. 7), and the mixed 4 x 400-meter relay (final on Saturday, July 31).

Simone Manuel, who won the 100-meter freestyle in Rio, did not qualify for the event this time but did manage to make the team by finishing first in the 50-meter freestyle at the trials last month.

· On the men’s side, Caeleb Dressel enters Tokyo as a contender for gold medals in at least six events. Dressel, 24, already has a pair of golds on relays from the Rio Games. He will compete in three individual events: the 50-meter freestyle (Friday, July 30), 100-meter freestyle (Wednesday, July 28), and the 100-meter butterfly (Saturday, July 31). He also is expected to swim in up to four relay events.

· In tennis, Naomi Osaka returns to the court after withdrawing from the French Open and Wimbledon. She will be representing Japan. On the men’s side, Novak Djokovic will continue his pursuit of the Golden Slam when he represents Serbia. Having already captured the Australian Open, the French Open, and Wimbledon, Djokovic will be going for gold before turning his attention to the US Open at the end of the summer. He would become just the second player to win all four majors and a gold medal in the same year, joining Steffi Graf, who pulled it off in 1988. The women’s final is Saturday, July 31, with the men’s final on Sunday, Aug. 1.

· Both the men’s and women’s basketball finals will air in prime time on NBC, on Aug. 6 and 7, respectively. The US women are going for their seventh straight medal, with UConn products Bird and Diana Taurasi playing in their fifth Olympics.

Celtics forward Jayson Tatum will suit up for the men, while new Celtics coach Ime Udoka will serve as an assistant coach for the squad.

Team USA will feature many athletes and coaches with New England ties. Here are just a few. To see the entire list, click here.

· Boxer Rashida Ellis from Lynn was named USA Boxing’s Elite Female Boxer of the Year in 2019 and is the favorite to win gold in the lightweight division.

· Gabby Thomas won the 200 at the Olympic trials by posting the second-fastest time in history and is the favorite to win gold. The Florence, Mass., native is also expected to run in the 4 x 100-meter relay.

· Hanson natives Sam and Kristie Mewis are hoping to bring back gold in soccer.

· Cambridge resident Molly Seidel qualified in the marathon with a second-place finish at the Olympic trials. 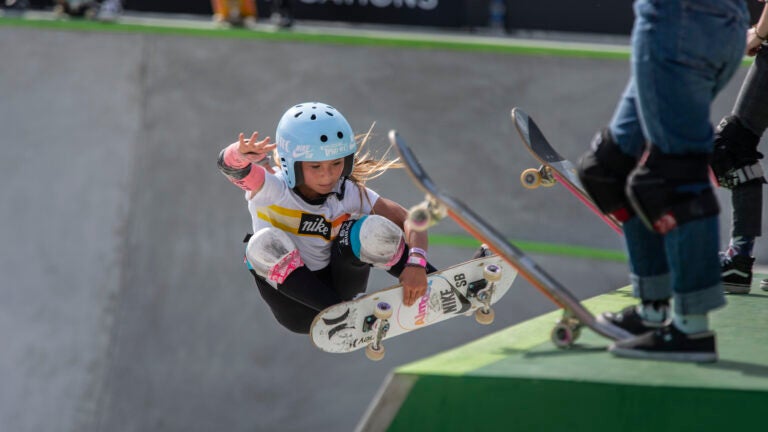 Meet a few of the youngest Tokyo Olympians, one of whom was born in 2009