For Essene Waters, the beauty of fencing – especially as a woman – is clear: When you’re on “the strip,” the narrow playing area where fencers compete, everything feels a bit more level.

“Once you put that mask on, it is such an equalizer,” said the 31-year-old systems engineer and fencing referee. “No one’s looking at you on the fencing strip and being like, why don’t you smile more?”

She’s seen women of all ages compete against men and beat them handily. That surge of self-confidence rushes into other parts of their lives, too, she adds, like in the workplace.

But there is also an “ugly” and “unsafe” side to the sport, according to Waters: She said she was sexually assaulted by a coach she had been working for.

“He made me sit on his lap because that’s what he made all of the women do,” she said. The coach had gotten her alone at the fencing club. Then he tried to grope her. Waters said she told him “no.”

These stories are “legion” in fencing, where a tightknit community around the niche sport makes it difficult for victims of sexual harassment and assault to come forward about their claims, Waters said.

Reopening these wounds as the Olympics get underway is the recent case of Alen Hadzic, an alternate for the U.S. Olympic fencing team who was permitted to compete in Tokyo despite an ongoing investigation into three separate sexual assault allegations.

The U.S. Center for SafeSport, a nonprofit agency responsible for handing abuse allegations across all U.S. Olympic and Paralympic sports, suspended Hadzic, a 29-year-old épée fencer, on June 2.

But Hadzic successfully challenged the ruling, and an independent arbiter late last month ruled that Hadzic could compete with the rest of Team USA. USA Fencing, also known as USFA, drafted a “safety plan” for Hadzic, which allowed him to compete under certain restrictions: He could not fly with the team to Tokyo, and he would be kept in a separate hotel from other teammates. USFA did not immediately respond to a request for comment.

Dan Hill, a spokesperson for SafeSport, said that the arbiter’s ruling should not be viewed as a statement of Hadzic’s guilt or innocence.

“If an arbiter modifies the center’s temporary measure, that should not be seen in any way as an exoneration,” said Hill, who noted that evidence related to the assault investigation wasn’t presented to the arbiter.

The hearing focused solely on whether the suspension should be modified to allow Hadzic to compete in the Olympics.

Waters, who said the allegations about his misconduct have been an “open secret” among the fencing community on the East Coast for years, feels “exhausted” by the news.

“I am tired of watching colleagues, friends, other women in the sport be assaulted, leave the sport, know that their abusers are still in the sport, and then watch them have unfettered access to young girls, teenagers, young women,” she said. “I hate the sport. I really, really hate the sport.”

Michael Palma, Hadzic’s attorney, said his client “completely, fundamentally denies” the allegations being investigated, which were reported by three women fencers after Hadzic qualified for the Olympic team in May. Two of the claims, Palma said, happened in 2013 at Columbia University, where Hadzic was a star member of the fencing team.

One more incident was reported in 2015. In at least one incident, said Palma, Columbia University ruled that a “nonconsensual sexual incident” happened and suspended him for a year.

Hadzic’s teammates told BuzzFeed News that he could be “very scary to be around,” claiming that he would target drunk, young women at college parties to coerce into sexual encounters.

Palma claims USFA knew about the allegations for years.

The high-profile case is emblematic of deeper problems within the sport and its arbitration process, said Waters, who has been fencing since she was 11 and has filed her own SafeSport case against her assailant.

“The feeling that you get when you deal with the national office is that the problem is the victim,” she said. “If you were a victim and you’re being loud about it – shut up, we don’t want to hear it.”

“The fact that people have known that this has gone on for a while and nothing’s really been done about it, I feel like that’s a failure,” Lu said.

In 2018, Lu wrote an open letter to the fencing community addressing sexual harassment and assault within the sport. The letter was triggered by the sexual abuse scandals that rocked USA Swimming and USA Gymnastics, Lu said, and a 2017 Portland North American Cup referee meeting where officials openly talked about the prevalence of sexual abuse and misconduct in the sport.

In an informal survey she conducted, fencers reported to Lu that coaches had gotten “grabby” with teenage girls. One person reported that a referee had “forcibly touched” them at a competition; another said a coach forced them to perform a sexual act in a hotel room while another coach was present.

Lu is still enamored with fencing – she loves the people she has met through it, and the camaraderie that can be found at tournaments. But those same qualities are also a hindrance, she said: People could be reluctant to act on a report because they don’t want to believe someone is capable of harm. Accusers are also reluctant to come forward against popular or powerful members of the community, such as star athletes, players or referees.

At her own gym, she said, Lu has tried to institute a sexual harassment and assault policy. But when she reached out to a support coordinator on how to put one in place, she was told she should just refer people to SafeSport.

“I don’t put a lot of faith in SafeSport,” Lu said. The arbitration process through SafeSport, which handles complaints from 53 different athletic bodies, can take years.

“I don’t believe in their process. … The people who work there are completely overworked,” Lu said. “It’s just not a good system.”

She would instead encourage someone who’s experienced harassment or assault to report it to police, because if charges come forward, it can spur quicker action than going through the full investigation process.

Hill, of SafeSport, noted that the length of the investigation process was a “legitimate concern,” but defended the center’s efforts as a “huge step forward” in responding to sexual misconduct.

More than 600 people have been made “permanently ineligible” since the center’s founding in 2017, and increased congressional funding has allowed for the SafeSport to clear a considerable backlog in cases in recent months, Hill said.

“All of this is a giant step forward compared to the way things have been done in the past,” said Hill, who noted that SafeSport can put in place temporary measures, like suspensions, to help protect those in the sporting community while an athlete is being investigated. Before, individual governing bodies might wait until the end of an investigation before taking any action.

Palma, Hadzic’s lawyer, said that the long arbitration process can be harmful for both accusers and the accused. According to Palma, Hadzic has suffered death threats and has not been able to successfully prepare for the Games.

Hadzic is staying in a hotel outside the Olympic Village, but he is staying with his personal coach and training partners, who are also alternates.

He is still permitted to eat at the same location as other Team USA members and is training in the same facilities as other fencers.

In an appeal hearing held last week, an independent arbiter upheld the restrictions in Hadzic’s safety plan, which his lawyers argued were “unnecessary” and “arbitrary.”

“The process was properly followed, the athletes had the opportunity to be heard, and we are satisfied with the decision to uphold the safety plan as written,” said United States Olympic and Paralympic Committee spokesperson Jon Mason.

Waters, the fencing referee, said she considered staying away from the sport after the coronavirus shut events down last year. Returning to the strip as a fencer is still traumatic for her – recently, she had a panic attack “just thinking about going back.”

But she knows her voice is needed. The problems in the sport just cut too deep, she says.

“I know that I’m capable of withstanding the damage to fight it,” she said. “I feel like I sort of do have a responsibility to go back to the front lines and keep making noise about it. 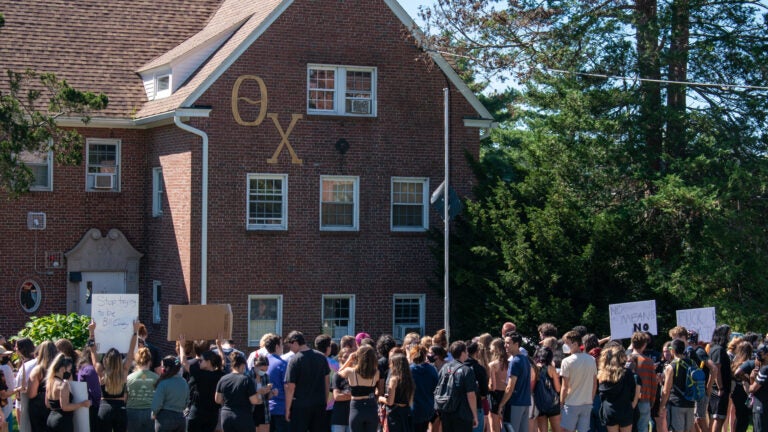