He will never be forgotten.

I first met Dick Hoyt in the early 1980s. I was running in the Falmouth Road Race and this guy runs up beside me “pushing a wheelchair” with a young boy in it. I had to do a double take. I had never seen anything quite like that before — maybe a baby jogger, but not an actual wheelchair.

I was first inspired by what I was seeing, but then determined not to let him (them) beat me. We raced and we raced. The son of a gun beat me!

I hunted him down and asked who he was. We got to talking and I asked him if he had ever thought about doing a triathlon. I had just started my business and created the Bay State Triathlon in my hometown of Medford, Mass. (1-mile swim, 40-mile bike, 10-mile run). Dick said to me, “Sure, as long as I can do it with Rick.” I rolled my eyes a bit and asked him how he planned to do that. He said he didn’t know but that he and I were just going to have to figure it out. And we did, and they competed.

Folks were amazed at seeing what they were seeing. This father pulling his son in a rubber dingy in the water, then pulling him along in a cart behind the bike and pushing him in a wheelchair.

Thus began 40 years of our relationship. 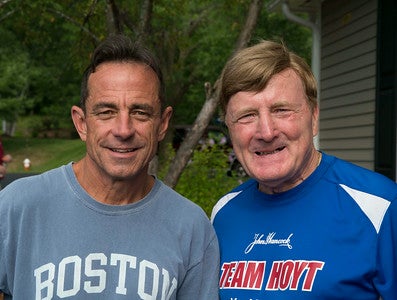 Dave McGillivray with Dick Hoyt in 2014.

A short time after that Dick called me. He said Rick had a question for me. Rick wanted to ask me if I could get them into the Ironman Triathlon in Hawaii. Holy cow! I had already done the race a few times so they knew I had “connections.”

I remember asking, “Dick, are you sure? Rick wants to do Ironman?” Yes. “What about you Dick?” He said whatever Rick wanted he’d do.

I made a few calls and got them in. We went to Hawaii together as I was doing it again, too.

I did the swim and was on the return loop on the bike, and the last finisher came by me going in the opposite direction. No Hoyts. What happened to the Hoyts?

As it turned out, they did not make the swim cut off time. Dick got sick during the swim. I thought, well, that was the end of their triathlon career. Wrong.

A few months later Dick called me again. “Rick has another question to ask you. He wants to try the Ironman again. Can you get us in?”

I got them in. They went back to Hawaii, and they finished it! The rest is history.

They eventually did hundreds of triathlons around the world including all of DMSE races. Rick and Dick were inducted into the Ironman Triathlon Hall of Fame. Only a few years ago, I personally inducted them into the USA Triathlon Hall of Fame at their function in Arizona. Dick was there, but Rick couldn’t travel so we just did a FaceTime with him so he got to experience it all, too.

After a few years, I became the Hoyt’s business manager, securing sponsorships for them, getting them into races, and setting up speaking appearances.

Then, the next call came in from Dick. “Rick wants to ask you another question.” Dear Lord (kiddingly), now what Rick. “Rick wants to run across the country like you did.” He wanted to do what? “Well, run and bike.” Yikes. Still, that’s a long way. I asked Dick what he wanted me to do. Dick said he needed me to manage the whole thing. Well, OK, I thought.

I designed the course, helped put it all together and off they went. They would often call and update me. About two weeks out from finishing, Dick called me again.

“Rick has another question to ask you.” Another question! OK, what is it this time? “Rick wants us to finish our run/bike in Fenway Park just like you did. Can you make that happen?”

At first I was like, I’m not sure I want to do that. Then I thought, this is the Hoyts. How can I not? I called the Sox and we were in. The Hoyts asked me to run it with them. So I did, keeping about 50 yards behind them though. This was all about them. 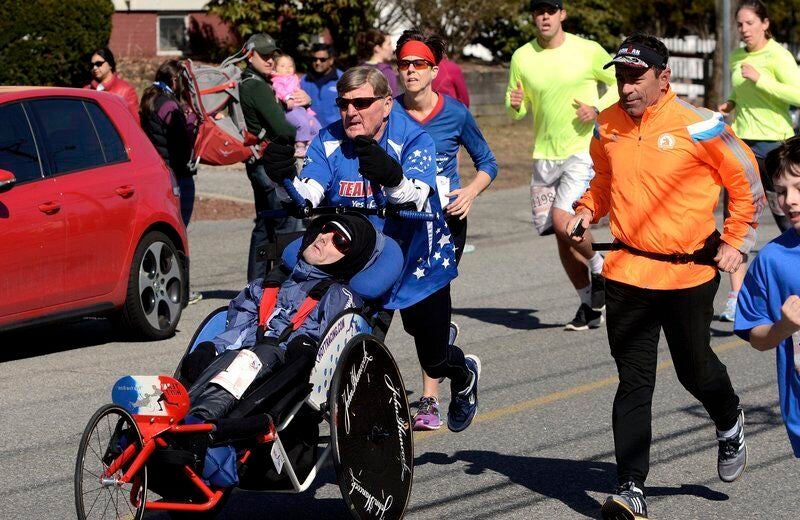 Another Hoyt moment for me was during the 2006 Boston Marathon. I believe it was the Hoyts 25th Boston. I was asked to hold a break tape at the finish line for the Hoyts. To my recollection, there had never been a break tape for anyone other than the winners of the race before.

I held the tape with Guy Morse, former race director. The cheering at the finish line was deafening.

A few years ago, the Hoyts came to my home to run some birthday miles with me. I turned 60, but it was then that I was diagnosed with coronary artery disease. I wasn’t feeling too great emotionally, but they came all the way from their home in Holland, Mass. to be with me for some miles as did many other dear friends.

When we were done, Dick handed me an envelope — my “birthday present.” It was a gift certificate saying I could push Rich in any future race I wanted. (What? I could push Rick?) That thought never entered my mind until then. BGE, Best Gift Ever.

I decided to do so at the Harvard Pilgrim Finish at the Fifty 10K. I was so nervous. I’d known the Hoyts for 40 years, but I’d never been alone with Rick, by myself. (What do I do, what do I say?) I’d be with him for over an hour.

Gun fired. Off we went. I had no clue what I was doing. (I hope this chair doesn’t tip over. How do you make it turn? How do you stop a runaway wheelchair going down a steep hill?)

I remember saying to myself, “Seize the moment, this may never happen again in my life.” I said, “Let’s just go down memory lane and talk about all the good times we have shared.” So I started, and went on and on. 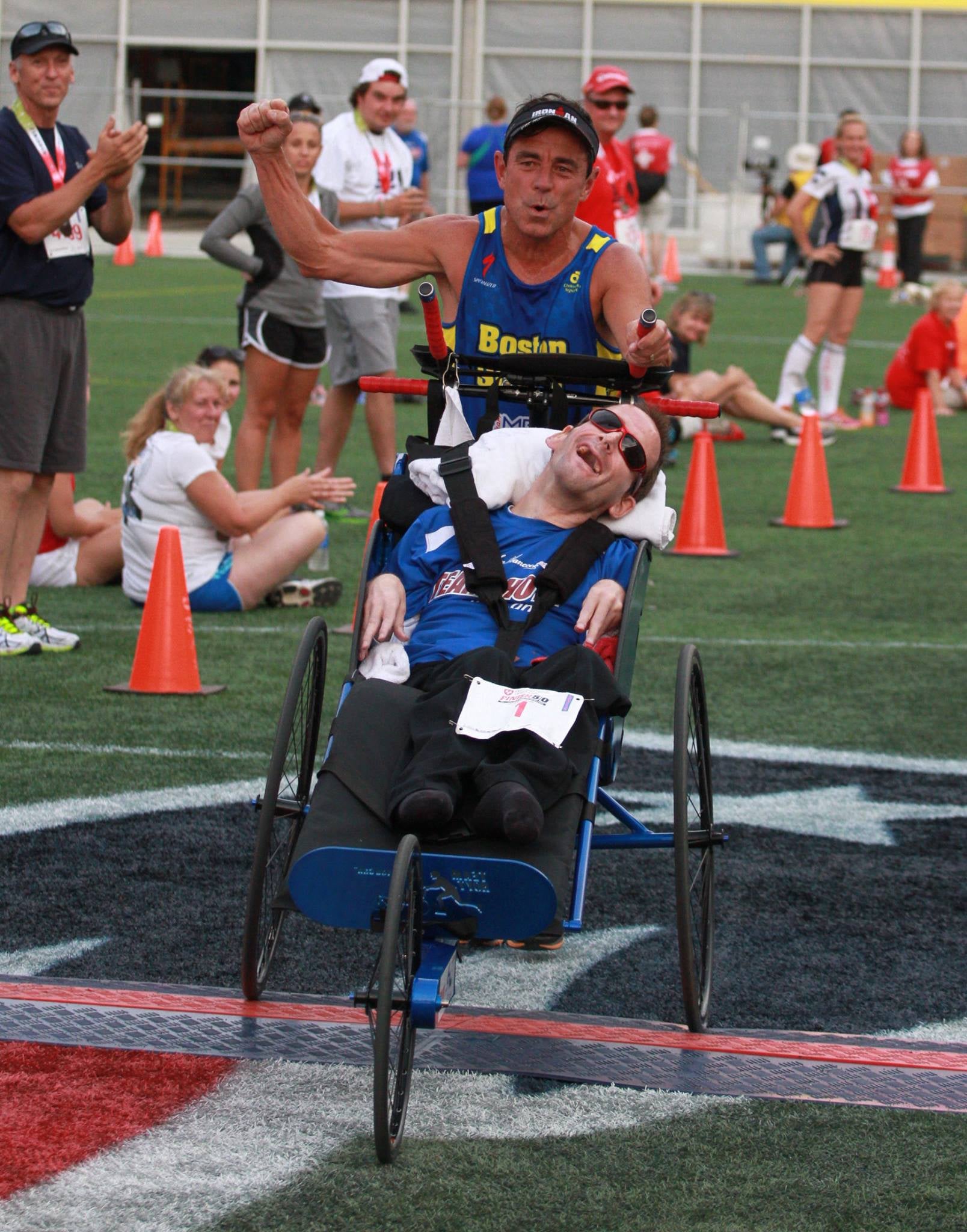 Dave McGillivray pushes Rick Hoyt at the at the Harvard Pilgrim Finish at the Fifty 10K.

I could tell he loved it, smiling and moving his head and arms. We had a blast. The look on his face when we finished was priceless. This athletic moment, sharing a mutually respectful friendship with Rick, went right to the top of my all-time memorable moments of my life.

I have Dick to thank for giving me the opportunity of being only one of three people (that I am aware of) who had, at that time, pushed Rick.

It is so sad to think that other person was another dear friend, Bryan Lyons, who sadly also passed away in his sleep last year. Dick, too, passed in his sleep.

Just last week I was on a Zoom call with Dick. It was the annual MetroWest YMCA Inspirational Award Breakfast. Dick and I were presenting the 2021 awards to Doug Flutie and Joan Samuelson. Over 150 folks were logged on and probably saw Dick for the last time that evening, myself included. I still can’t believe it.

Dick and Rick were studs; amazing athletes, both of them. What they both endured together is a story of legend. I witnessed so much of it personally.

Imagine pushing your son in a wheelchair in the Boston Marathon and going under three hours! Dick wasn’t a slouch. He was fast, even pushing a chair.

I always kidded him by saying that he had an advantage over the rest of us. He asked me, “How so?” I said, “Well, you have your secret weapon with you all the time, right in front of you, your inspiration and motivation. He is like a magnet, pulling and pulling you forward. If and when you get tired, there he is, inspiring you, pushing you, and cheering you on! That’s just not fair.” Ha-ha of course. After pushing Rick myself, I don’t ever think I brought that subject up again!

What I admired most about Dick (and, of course, Rick) wasn’t as much about their athleticism. It was that when Rick was born, Dick didn’t leave him behind. He embraced his son and included him in his life, and all he was involved with.

Dick was one of the very first to participate in the Boston Marathon for a greater purpose, not just for himself. He was one of the first to introduce this into our industry and pave the way for thousands to believe in themselves and participate by giving back. He helped crumble the walls of intimidation.

The Hoyts inspired scores of Team Hoyt chapters all over the country and the world. Because of them, many challenged athletes and kids are experiencing the thrill of participation and competition. That would never have happened if it weren’t for the Hoyts.

I feel like I have hundreds of similar inspiring stories about the Hoyts too numerous to mention, but it seemed like every time I was with them something inspiring occurred. There aren’t too many athletes on this planet I think of in quite the same way.

I always thought Dick and Rick were invincible. They just had that kind of persona. Dick has left a legacy never to be matched.

I worry about Rick, but I also know he is also the warrior that his dad was, and will persevere. It would be a great tribute to Dick if someday someone was able to push Rick again in honor of his dad, our friend, our hero. Maybe someday.

He will never be forgotten. God bless Team Hoyt.

Dave McGillivray is the Boston Marathon race director, a philanthropist, motivational speaker, and an accomplished athlete.

You can support Team Hoyt at teamhoyt.com.