NEW YORK (AP) — Rob Manfred had just made a 6 o’clock decision to cancel a second week of games, and MLB Deputy Commissioner Dan Halem was thinking the lockout could go on quite a while longer.

Then at 6:24 p.m. on March 9, a new proposal from union deputy general counsel Matt Nussbaum plopped into his inbox.

By the time Halem left the office that night, he recalled thinking: “I thought we had a chance to get it done.”

After 11 months of bickering in bargaining, Major League Baseball’s labor contract came together in just a few hours on March 10.

Talks had broken off over an international draft, but Halem’s outlook changed in the short time between Manfred green-lighting the cancellation announcement and MLB’s publication of the news release at 6:30 p.m.

Labor relations in baseball is a mix of banter and bluster, tenacity and tedium, revising and resisting.

In the end, there was not a single face-to-face meeting in the final 24 hours as the sides negotiated on the telephone and through email.

Manfred’s cancellation decision came four hours after the last in-person session. MLB staff sent the union an edit of Nussbaum’s email that night, and after some back-and-forth in the morning, players accepted.

Halem convened a Zoom of the labor policy committee at 10:30 a.m. on March 10, and at noon Senior Vice President Patrick Houlihan emailed to chief negotiator Bruce Meyer, general counsel Ian Penny and Nussbaum what was labeled a best-and-final offer to preserve a 162-game season and full pay, attaching a 3 p.m. deadline.

The union executive board met by Zoom starting at 1 p.m., and Meyer texted Halem a little before 2 p.m. asking for more time.

Veteran baseball writer Jon Heyman tweeted the balloting in what appeared to be real time, first at 2:50 p.m.: “Union executive board appears to be voting against approval.” Then at 3:07: “Team votes are coming on now. … So far players are going against the executive council.”

At 3:17 management negotiators heard cheers erupt from elsewhere on the floor of MLB’s Rockefeller Center office. They were a response to his tweet: “Union votes yes on deal.”

The final vote was 26-12 in favor, with the executive subcommittee all opposed and the team player representatives 26-4 for approval.

About 20 minutes later, Meyer called Halem to deliver the news, and at 6 p.m. the 30 owners unanimously approved during their own Zoom.

“We had 38 guys on our executive board who were intimately involved in every step of the way — either they took part directly in meetings or they were being briefed multiple times a day,” Meyer said.

“Everything that we did was done based on the input and guidance from the board. We obviously wanted to explore all possibilities of getting a fair deal without missing games. If there wasn’t a fair deal to be had, then guys were prepared to do whatever is necessary. Ultimately, a majority of guys believed that the deal we had on the table was a good deal and worth taking without the risk of missing games.”

Collective bargaining in sports is a process of posturing by management and players who refuse to reveal bottom-line positions until the last possible moment before big money is in danger.

Meyer, a bespeckled, bearded 60-year-old sports law attorney and litigator who spent 30 years at Weil, Gotshal & Manges, was hired by the union in August 2018 as senior director of collective bargaining and legal.

Halem, a 55-year-old former Proskauer partner, joined MLB in 2007 and took over as MLB’s chief negotiator ahead of the 2016 agreement. He felt repeatedly frustrated by Meyer’s lack of historical knowledge of the CBA.

Bargaining has a Rashomon effect on the parties.

MLB felt an initial turning point was on Feb. 28 during 16 hours of talks in Jupiter, Florida, that would stretch until 2 a.m. the next morning. A two-on-two meeting among Halem, executive vice president Morgan Sword, Meyer and union director of player services Kevin Slowey started just after 7 p.m. and lasted almost an hour in a second-floor office next to a conference room. The sides discussed what could lead to a framework of various packages and trades.

Meyer remained pessimistic, focused on the large gap in numbers and was convinced management was trying to spin an unwarranted upbeat outlook.

There had been 14 largely unproductive bargaining sessions leading up to the lockout on Dec. 2. Initial presentations were made April 20 and the first proposal on May 6. Because of the pandemic, sessions were held over Zoom and dominated to some extent by speeches.

The sides met in person on Aug. 16 in Denver, when MLB made an economic offer. The union responded on Oct. 29, the day of World Series Game 3. There were four more meetings during the first few weeks of November, then three starting Nov. 29 at the Four Seasons Resort at Las Colinas in Irving, Texas, site of the union’s executive board meeting. Players made an offer, and MLB concluded there was little to respond to.

“It was clear there wasn’t going to be a deal before the deadline,” Halem said.

Bargaining broke off, and management’s negotiators left the hotel about nine hours before the contract expired at midnight EST. While MLB prepared for a signing freeze, teams feverishly concluded a one-day record of $1.4 billion in contracts to 27 players.

Economic negotiations didn’t resume until Jan. 13, and then only with another Zoom. The sides held a core economic meeting in person for the first time since the lockout on Jan. 24 at the union’s New York office, and players withdrew their proposal to liberalize free agency with an age-based backstop.

The sides met again the following day and MLB eliminated its plan to cut salary arbitration eligibility and also for the first time agreed to the union’s concept of a pre-arbitration bonus pool, though at $10 million to the union’s $105 million.

What followed was a series of glacially paced sessions that reinforced spring training would not start as scheduled on Feb. 16. MLB’s request for a federal mediator was rejected by the union and a Feb. 17 session lasted just 15 minutes. At a one-on-one side session after, Halem told Meyer a deal would have to be reached by Feb. 28 to salvage March 31 openers.

Talks shifted on Feb. 21 to Roger Dean Stadium, the spring training home of the St. Louis Cardinals and Miami Marlins, less than three miles from the home of Max Scherzer, whose $43 million salary tops the majors. With more than a dozen players and several owners on hand, the sides spent four straight days mostly feeling each other out, testiness increasing and players pounding the table and shouting at Halem and owners in frustration over management’s lack of movement on tax proposals.

A one-on-one meeting that Friday on Feb. 25 between Manfred and union head Tony Clark started at just before 4 p.m. and lasted about 30 minutes, mostly discussing playoff format. It was the first sign of movement.

There was slightly more intense bargaining over the weekend, but not until Monday’s marathon of 13 sessions over 16 1/2 hours was extensive progress made.

MLB voiced more confidence than the union and extended Manfred’s deadline to save opening day until 5 p.m. Tuesday. But after a union conference call, talks stalled again with each side lashing out.

Manfred held a news conference in the left-field corner as the deadline passed, canceling a week of games. Two hours later, the union held its own media session 5 1/2 miles away at the Wyndham Grand Jupiter, with Scherzer and reliever Andrew Miller flanking Clark and Meyer, and more than a dozen players sitting in the audience to lend support.

Bargaining resumed on Sunday, March 6 in what would turn out to be the start of five straight days of negotiations culminating in the deal. By then, there had been enough progress that MLB counsel Vanish Grover and Justin Wiley started preparing what would become a 20-page memo outlining terms that Halem would send on the evening of March 10 to club control persons.

On Monday, Manfred got approval from the labor policy committee for the Tuesday deadline to cancel another week while telling the union it was the last time to get in 162 games and keep full pay, That was conveyed during a three-on-three meeting at the union office that started at 3:30 p.m.

“The use of deadlines and extending deadlines and figuring out when to set them and when to back off them is part of the art of collective bargaining,” Manfred said.

MLB extended that deadline to Wednesday during 16 1/2 hours of talks that recessed at 2 a.m. to allow another player meeting in the morning. That became the day of hang-ups over the draft, which included the final in-person meeting, when three union officials make a three-block walk through a wintry mix of snow and rain to hand-deliver an offer.

Manfred’s fifth deadline was the one that worked, enabling the season to start a week behind schedule on April 7.

“The deal got better and better for us at every stage, including even in the last 24 hours,” Meyer said. “Players generally don’t appreciate being given deadlines. They don’t react well to it. Having said that, there were certain aspects of the calendar that did affect the parties’ assessment of where they were.”

Similarly, the pre-arbitration bonus pool increased from $10 million on Jan. 25 to $40 million on March 8 and $50 million in the final deal.

The executive subcommittee thought the union could have pushed for more — seven of the eight earned $12 million or more last year, and five are represented by the game’s leading agent, Scott Boras. The majority of the larger executive committee took the deal in what the union said showed the democratic nature of a union that encouraged widespread attendance on the Zooms.

“We don’t tell teams how to vote or who to vote for for player reps,” Meyer said. “Teams obviously make their decisions. Some clubhouses, they tend to be younger guys. Other clubhouses, they’re veterans.”

A contract was reached on the 99th day of the lockout, 325 days into negotiations that took longer than a season. There was no joint news conference, instead media sessions separated by three city blocks and one day, an indication the 2026-27 negotiations may have the same tone.

Just 161 1/2 hours after the start of Manfred’s news conference to announce the lockout’s end, Boston’s Michael Feliz threw the first pitch of spring training, a fastball high taken by Minnesota’s Byron Buxton before a crowd of 8,303 at JetBlue Park in Fort Myers, Florida. 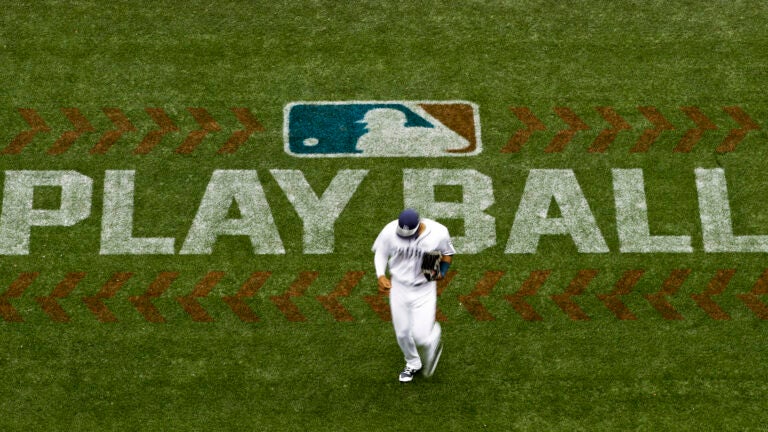