Rob Gronkowski said Wednesday that Tom Brady played a sizable role in his decision to come out of retirement, and that the chance to play with the quarterback again was too good an opportunity to pass up.

Speaking publicly for the first time since he was dealt to Tampa Bay, Gronkowski detailed a February conversation he had with his teammate. Before Brady signed with the Buccaneers, Gronkowski was mulling a possible return after a year on the shelf.

He said his initial thought was heading back to New England — if Brady had returned to Foxborough.

“It would definitely have been an opportunity I would have looked at for sure,” Gronkowski said of the possibility of another season with the Patriots with Brady. “Playing for Tom is special. He’s one of the greatest quarterbacks of all time. To build a connection with a quarterback, too, is something special.”

Gronkowski said he worked out with Brady in February, and told Brady “if there’s the right opportunity out there,” he’d return.

“[Brady] was all fired up and juiced up about it,” Gronkowski said.

The quarterback signed with the Buccaneers in March, and just over a month later, Gronkowski was dealt to Tampa Bay.

“We have great chemistry out there and every time we get together, it’s just like the old days,” Gronkowski said. “It doesn’t matter if we take a month off or six months apart. We just go out there and we’re throwing the ball just like it’s a normal practice no matter what.

“It just happened to be the right opportunity, I feel like, down in Tampa. Yes, Tom is like the appetizer of the whole meal. He got me hooked when he went down to Tampa. I saw what was down there, just the opportunity to go down there and play with that type of offense.”

As for the Patriots, Gronkowski had plenty of positives to share about his time in New England, saying he’s going to take plenty of lessons from his time with coach Bill Belichick and owner Robert Kraft.

“I’m very thankful for the nine years I had with the New England Patriots,” Gronkowski said. “Hands down, I learned so much under that organization. I’ve learned so much football from the best coach, hands down. That will not change, the best coach in all of football, coach Belichick. I’ve learned more football than I ever have in my whole entire life under coach Belichick and just learning so much under just the organization of Mr. Kraft, too. There’s two guys I looked up to and will always look up to. They’re the ones who drafted me and gave me my first opportunities ever in the NFL, and I’m very thankful for those opportunities.”

Gronkowski also acknowledged some of the stresses that come with playing in New England, issues that have been raised over the last few years by players who have departed Foxborough.

“[Belichick] says it all the time, man – he always says it that it’s not an easy place to play,” he said. “I’m not going to sit here and say it’s the easiest organization to play for. I’ve also never played for another organization. I haven’t even been down to Tampa yet, so I’m not even sure what to expect. But I know that the New England Patriots, hands down, it’s not the easiest place to play.

Gronkowski said his playing weight fluctuated between 262 and 265. At this point, he’s at 250, but he didn’t sound worried about packing on another dozen pounds or so, adding a few extra protein shakes might be enough to do the trick. 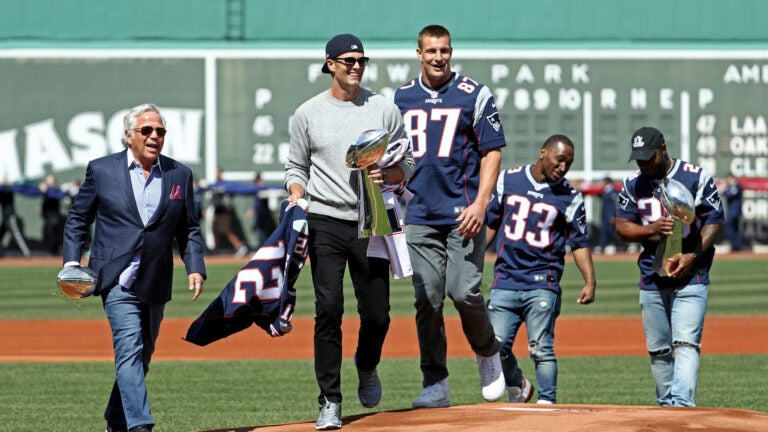 Rob Gronkowski and Tom Brady together again? That’s good on and off the field.