Hope Solo has moved on.

She was in goal four years ago when the United States won the Women’s World Cup in Canada. She will be a spectator when the team seeks to defend its title starting June 7 in France.

Solo was dismissed following the 2016 Olympics in Brazil after calling the Swedish team “cowards” for taking a defensive stance against the defending gold medalists — ending a laudable playing career that was also marred by controversy.

Solo’s name will still be bandied about this summer, drawing both comparisons and questions: Would the United States be a stronger contender if it had the 37-year-old Solo, who was arguably still at the top of her game when she had her nasty breakup with U.S. Soccer? And her story will again be told.

Solo has no regrets, no apologies.

“I will tell you that I am really happy where I am in life, that I fulfilled everything that I wanted to fulfill on the field. If I would have retired without a World Cup trophy, I think I never would have been able to settle into my new lifestyle. But luckily we won that 2015 World Cup and I was able to win a couple of Golden Gloves, which was a personal goal of mine, and a couple of gold medals. I hold almost every goalkeeping record,” she said. “I am not sure there is much more that I could have done.”

Solo has been trying to reinvent herself, transitioning from athlete to activist. At the World Cup, she’ll be part of the BBC’s broadcast plans, an initiative called Change The Game that focuses on women’s sports.

A focus of her post-playing career has been equal rights and pay.

Solo was among five star national team players who filed a complaint in 2016 with the federal Equal Employment Opportunity Commission that alleged wage discrimination by U.S. Soccer.

Although she was no longer with the team, she filed a lawsuit against the federation last August, alleging discrimination under the Equal Pay Act and the Civil Rights Act.

Players for the U.S. women’s team filed a similar suit in March that accuses U.S. Soccer of “institutionalized gender discrimination” that includes unequal pay with their counterparts on the men’s national team.

The USSF maintains the men’s and women’s teams have different collective bargaining agreements, and, as a result, different pay structures.

A hearing to join the two lawsuits is set for May 30.

“I realize that it’s the hardest route to go is to fight, and continue to fight and to continue to lose out, honestly,” she said. “I’ve lost out on endorsements because I’m an adversary to U.S. soccer. I’ve lost out on broadcasting opportunities because I’m an adversary to U.S. soccer. So these things are real. And I feel the financial burden, I feel the personal burden, I feel the burden within the media. But I do know that you have to fight to change the world.”

Solo made 202 appearances with the national team with 153 wins and an international-record 102 shutouts. During the 2015 World Cup championship run, she allowed just three goals in seven games with five shutouts.

Her tenure with the national team abruptly ended the next year following the Brazil Olympics when the Americans were ousted by Sweden in the quarterfinals. Afterward, Solo called the team cowards. The blowback was immediate.

Although Solo maintains she apologized to Sweden, then-coach Pia Sundhage and even her own teammates, U.S. Soccer suspended Solo and terminated her contract.

The federation maintained the decision was based on a culmination of events. Solo was suspended for 30 days in early 2015 when she and husband Jerramy Stevens were pulled over in a U.S. Soccer-owned van, and Stevens was charged with DUI. She was benched after publicly questioning coach Greg Ryan’s decision to start Briana Scurry against Brazil during the 2007 World Cup, which many saw as a slight against Scurry. And there was an off-field altercation with family members in 2014 that resulted in Solo’s arrest, although charges in that case were eventually dropped.

Solo maintains the real reason for her dismissal is that she speaks out. Had she been a man, perhaps the punishment wouldn’t have been so harsh and permanent, she said.

“People say I’m outspoken and I guess I used to think it was a word used to put me down,” she said. “But now I look at it as a term of endearment, because being outspoken is hard. And being able to speak about what you see as the truth, I think it’s very difficult, because we as athletes are oftentimes taught to deal with the media in a way that is very just kind of predictable.”

In the intervening years, Solo was among the candidates who ran for president of U.S. Soccer but lost to current President Carlos Cordeiro.

She has worked with a youth soccer club in Los Angeles, Tudela FC, as well as Street Soccer USA, a national nonprofit that seeks to look at community-level ways to address poverty through soccer. The program has spread to 15 cities and has helped some 15,000 kids and adults.

The national team has also moved on, and will take Alyssa Naeher, as well as goalkeepers Ashlyn Harris and Adrianna Franch, to France. All three face inevitable comparisons to Solo, fair or not.

In an AP interview earlier this year, Naeher said she can’t get wrapped up in the debate.

“At the end of the day, I can only control me, control who I am, the type of player I am, the way that I play and the way that I carry myself,” Naeher said. “That’s the great thing about this sport and the position specifically, is that there is no black and white way to go about it. We’re all different and we all bring our own personality and uniqueness to the team and to the position.”

Solo has settled into a comfortable life with Stevens on 50 acres in North Carolina, where she has a vegetable garden and there’s room for the couple’s dogs — and chickens — to roam.

As for her future, there is one thing Solo probably won’t ever do again.

“I think we all know the answer to that question, I am not going to play again. I have not retired because, well, I got fired,” she said. “You know I hope one day U.S. Soccer will give me the respect that every other player has received, which is a retirement game. And hopefully one day I’ll be able to actually, formally retire and say goodbye to all my wonderful fans.” 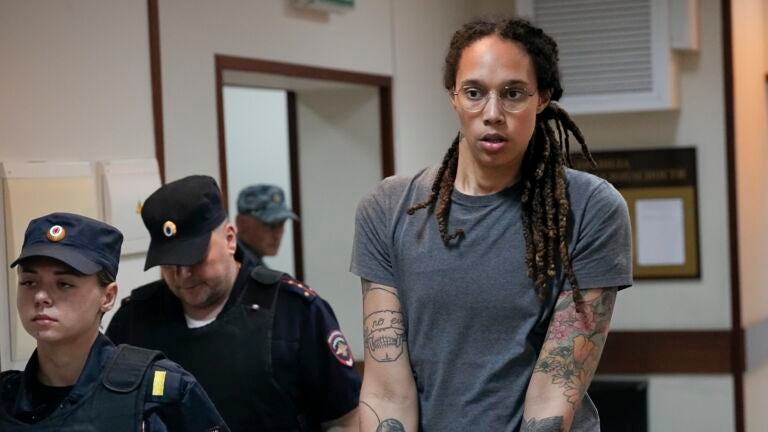