A day earlier, FIFA President Gianni Infantino had announced that he’ll seek to expand the tournament field from 24 to 32 teams and double the prize money for the women. But even doubling the pool from $30 million to $60 million doesn’t diminish the gap with the men’s World Cup prize money, which is set at $440 million for Qatar, up from $400 million in Russia last year.

Rapinoe has maintained that FIFA doesn’t truly care about the women’s game.

“If you really care are you letting the gap grow? Are you scheduling three finals on the same day? No, you’re not. Are you letting federations have their teams play two games in the four years between each tournament? No, you’re not,” Rapinoe said. “That’s what I mean about the level of care, you need attention and detail and the best minds that we have in the women’s game, helping it grow every single day.”

Inequity between the men’s and women’s World Cup had been stark since before this year’s tournament started, focused on the prize money and scheduling, but also on the promotion of the event.

Asked what would ensure the growth of the game globally following this summer’s tournament, Rapinoe sang the opening refrain from the O’Jays song “For the Love of Money.”

“Money, Money, Money, Money. Money from FIFA, money from federations. Money from advertisers, sponsors, rights-holders, TV. All of that. And obviously not just blindly throwing cash at things, but investing in infrastructure, in training programs and academies for women, in coaching for women. All of it,” she said. “I don’t think you get to the point of having an incredible business by running it on a budget that’s a dollar more than it was last year. You have to make up-front investments and really bet on the future.”

Infantino sought to address concerns Friday, pointing to the successes of the tournament in France, including record television audiences.

“Nothing is impossible and based on the success of this World Cup of course we have to believe bigger and to do what we should have done already probably some time ago,” Infantino said. “But now we have the evidence to do it for women’s football.”

Approval to expand the field for the 2023 Women’s World Cup would have to come quickly because bidding is already under way. The 37-member FIFA Council is due to vote for the host next March. Nine countries have expressed interest, with formal bids due Oct. 4.

He’ll also propose raising the women’s prize money, team preparation funding and cash for clubs releasing players to $100 million, up from $50 million for France. However, men’s teams in Qatar will see those funds go up to $649 million.

“I understand it’s a very complex problem,” Rapinoe said. “But the resources are there and I think the willingness and the brain power is all there, the people wanting to work in the women’s game and make it as good as we can, it’s all there. It’s just a matter of wanting to do it and caring enough about it, to make it happen. I mean, we’re making a World Cup in Qatar happen.”

Rapinoe did praise the U.S. Soccer federation for its support of the women’s national team. The comments come despite a federal lawsuit the players filed against the federation, accusing it of discrimination and seeking more equitable pay to the men’s team. The two sides are expected to mediate the dispute when the World Cup is over.

“We don’t often give them kudos, but that’s definitely one that I’m willing to give. They back the team in a very strong way and have pushed the game, not only in our country but around the world, to a level that without us, we wouldn’t be here in the world game,” she said. “So I think that they do deserve a tremendous amount of credit for that, and we’ll continue to nudge them forward.” 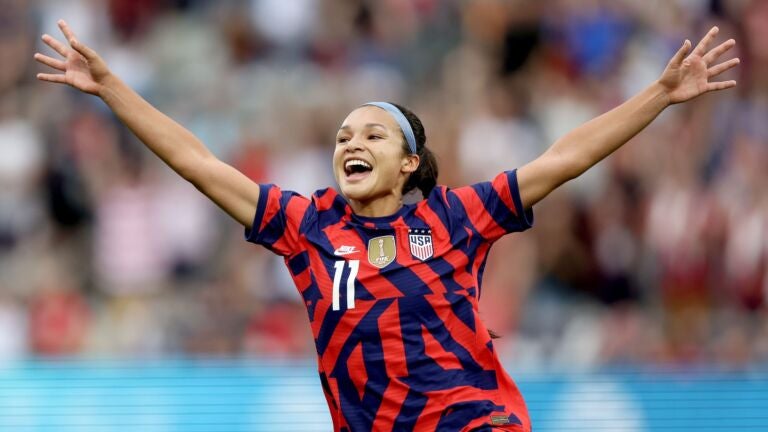