It should come as no surprise that Fox Sports, the World Cup rights holder, intends to shirk any journalistic integrity and will not address the moral quandary of Qatar’s selection as host during the network’s coverage of the tournament. Frankly, the only surprise is that anyone believed Fox’s parent company, which has had plenty of practice in recent years of disregarding truth for ratings and profit, has any journalistic integrity remaining.

Fox Sports executive producer David Neal confirmed there will be no mention on its broadcasts of Qatar’s lengthy list of human rights violations, including its criminalization of homosexuality, its treatment of women as subservient to men, and a reported 6,500 migrant-worker deaths since it was awarded the World Cup 12 years ago.

“We really believe viewers come to us at Fox Sports for the World Cup to see the World Cup,” Neal told The Washington Post, acknowledging that it is an editorial decision.

In other words: We’ll shut up while they dribble.

The more appropriate approach would be to emulate how NBC Sports addressed China’s human rights violations during its Beijing Winter Olympics coverage earlier this year. Host Mike Tirico, along with Savannah Guthrie, spoke at length during the Opening Ceremonies with experts on China who explained the country’s treatment of minority Muslim Uyghurs and other issues. NBC’s candor did not damage the Olympics. But Fox, which The Post reported is receiving a major sponsorship from Qatar Airlines, is there to tell us about what’s happening on the field, and not what might have happened while its stadium was being built.

The network is sticking to sports, and here’s a truth: It has a superb roster of broadcasters to help them do it.

John Strong and Stu Holden are back as the lead tandem, as they were during the World Cup four years ago in Russia. They will call their 300th match together sometime during the World Cup. Other pairings include JP Dellacamera and Cobi Jones, Derek Rae and Aly Wagner, Ian Darke and Landon Donovan, and Jacqui Oatley and Warren Barton. Oatley is the first female play-by-play voice to call men’s World Cup matches for a US network. All five broadcast teams will be calling matches on location. Wonder which airline they flew to get there.

Coverage begins Sunday at 11 a.m. when Qatar opens vs. Ecuador on FS1. The United States men play their first match Monday against Wales at 2 p.m. on Fox.

It was a pleasant surprise Wednesday morning to flip on “Toucher & Rich” in the car and hear Michael Holley as the third voice. Holley has been busy since leaving WEEI in February 2018 — working full time at NBC Sports Boston, hosting “Brother From Another” with longtime pal Michael Smith on Peacock, and teaching journalism at Boston University — but he hadn’t done any radio until a Toucher & Rich producer reached out a week ago. With usual third voice Jon Wallach scheduled to call 20-25 Celtics games on the Sports Hub when Sean Grande moves to TV when Mike Gorman is off, cohost Rich Shertenlieb drew up a list of potential fill-ins, and Holley was high on his list. There’s nothing planned regarding regular appearances, but Holley fit in seamlessly . . . NESN says its household viewership for Bruins games is up 34 percent in terms of impressions — or estimated viewers — over last season. The most interesting detail of their data: Impressions are up 44 percent over last year among women in the 25-54 demographic. Much of the uptick in viewership can be attributed to an appealing team that plays a fun style under new coach Jim Montgomery. I’d suggest the Red Sox, the Bruins’ NESN neighbor, could learn from this — put together a compelling, successful team, and ratings and viewership will rise — but it’s frankly something they should already know, and be striving to achieve . . . I’ll miss Twitter should billionaire buffoon Elon Musk’s hubris collapse it for good, and I’ll write more about what is — was? — so good about it should its chirp fall silent. A thought for now: Those scoop-masters and information peddlers with massive followings, such as Adam Schefter (9.9 million followers) and Adrian Wojnarowski (5.7 million), must be very nervous about Twitter’s fate. Their prominence and salaries were enhanced by their ability to feed info nuggets to Twitter even before they worked at ESPN. 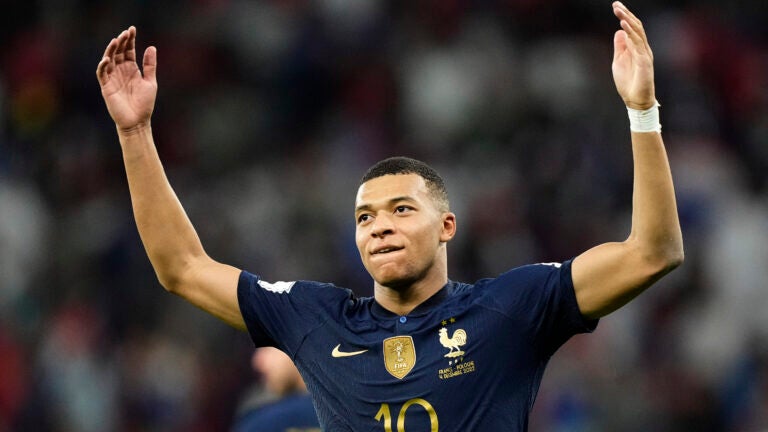 Mbappé is bringing soccer to a new dimension at World Cup