CINCINNATI (AP) — Get in front of the goal and stay there. North Dakota’s simple strategy turned its NCAA Tournament game into a rout.

Johnny Simonson’s deflection for his first goal since October started North Dakota’s early barrage, and the Fighting Hawks took down the nation’s hottest team, beating Northeastern 6-2 on Friday in a Midwest Regional semifinal.

The Fighting Hawks (31-6-4) will play Michigan (25-7-5) for a berth in the Frozen Four on Saturday. The Wolverines beat Notre Dame 3-2 in overtime in the other semifinal.

Northeastern (22-14-5) was the hottest team on ice, going 20-1-2 since the end of December. The Huskies were 13-0-1 heading into the regional semifinal, the longest active undefeated streak in the country and the longest in school history. Their second-half surge was set up with shutdown defense — only 25 goals allowed in the second and third periods of their last 23 games.

This one was well in hand by that time. North Dakota piled the most goals against Northeastern all season, each one by a different player.

“We wanted to get pucks to the net early,” said Drake Caggiula, who scored the final goal. “It’s hard to stop a puck when you can’t see it, so we tried to get as many bodies in front of him as we could.”

The Fighting Hawks quickly got comfortable at U.S. Bank Arena, the place where they won the regional in 2014 as a no. 4 seed. They were on a pretty good streak of their own, going 8-1-1 heading into the semifinal. And they were the more aggressive team from the outset.

“They played at a faster pace than we did in the first period,” Northeastern coach Jim Madigan said. “We couldn’t get our legs going in that first period, and we lacked a little poise.

“We just didn’t react quickly. We were off at the start of the game and I don’t know why.”

Only 3:07 into the game, Nolan Stevens skated in on Johnson and beat him with a shot into the upper corner of the goal — North Dakota’s only bad moment.

“We had a good start — we got one there,” junior John Stevens said. “Maybe it was just nerves and getting ready for their speed. We weren’t ready to come out of the gate.”

The Fighting Hawks tied it when Simonson deflected Keaton Thompson’s slap shot into the net a couple minutes later. It was the sophomore’s third career goal and his first since October. That got North Dakota going.

“It was big for our team after going down 1-0,” Simonson said. “Just a hard, simple play.”

Bryn Chyzyk scored off a faceoff, and Boeser got a loose puck and slapped it in for a 5-1 lead early in the second period — a shock to the Huskies, who hadn’t allowed five goals in a game since November. The Fighting Hawks kept constant pressure on Ruck, who had 30 saves.

Johnson had 14 saves in the first two periods while North Dakota took control. He gave up Matt Benning’s slap-shot goal early in the third period and finished with 24 saves.

NOTES: North Dakota is making its 14th straight appearance in the tournament, the second-longest such run in Division I history, trailing only Michigan’s 22 straight appearances from 1991-2012. The Fighting Hawks have won seven national titles, most recently in 2000. Only Michigan has more titles with nine. … The Huskies were in their first NCAA Tournament since 2009, the longest stretch between appearances of any team in tournament. They last reached the Frozen Four in 1982. … It was their first loss since a 3-1 defeat against Boston University on Feb. 1. 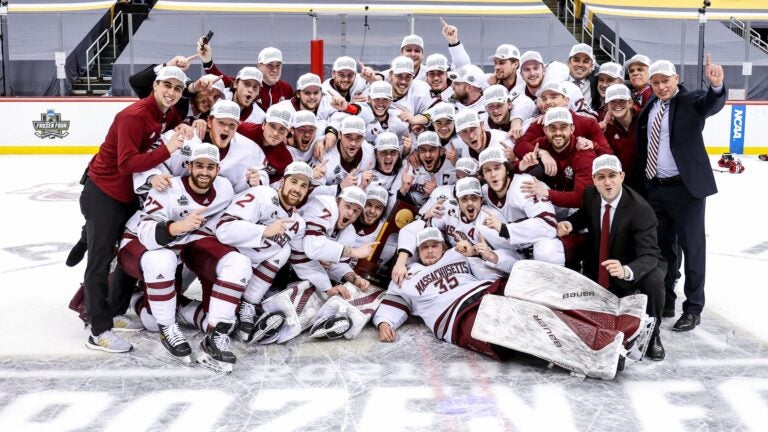