TAMPA, Fla. (AP) — Quinnipiac goalie Michael Garteig raised his arms in triumph and bounced on his skates in front of the Bobcats’ net.

The 3-2 victory over Boston College on Thursday night sent the tiny school located at the foot of Sleeping Giant State Park in Hamden, Connecticut, to the NCAA hockey title game for the second time in four years

And it took every one of Garteig’s 34 saves for the Bobcats to advance.

“Garzie is a winner. All year long he has been going up head to head with the top goalies in the country, and he finds a way to win,” Quinnipiac coach Rand Pecknold said. “That’s what he does.”

Kevin McKernan and Andrew Taverner scored in the opening period and Landon Smith added a power-play goal that made it 3-1 in the second period, setting the stage for Garteig to shine when the Bobcats needed him.

Ryan Fitzgerald’s power-play goal trimmed Boston College’s deficit to 3-2 with 4:16 remaining. Garteig had four more saves, including a glove deflection on Ian McCoshen’s shot from the high slot in the closing seconds.

“He made a terrific save,” Boston College coach Jerry York said. “It ended out season “

Quinnipiac (32-3-7) will try to win its first national championship Saturday night against North Dakota, a 4-2 winner over Denver in the second semifinal.

The Bobcats lost to Yale in their only previous appearance in the title game in 2013.

Senior Travis St. Denis is the only Quinnipac player remaining from that team.

“It’s definitely very exciting,” St. Denis said. “It was a tough loss our freshman year. Now we get another kick at the can.”

This was the first meeting between the Eagles and Bobcats, who are in the Frozen Four for just the second time. Quinnipiac didn’t start its program until 1975 and made the transition from Division II to Division I 18 years ago.

Boston College, meanwhile, has one of the most-accomplished programs in college hockey with a record 25 appearances in the national semifinals, 12 under York.

The Eagles (28-8-5) won the most recent of their five NCAA championships in Tampa four years ago, though none of that rich tradition mattered to Quinnipiac — generally regarded an underdog in the Frozen Four, even though the Bobcats have the nation’s best record and are the top seed in the tournament.

McKernan gave Quinnipiac some early momentum, scoring from the slot less than three minutes into the game. Taverner made it 2-0, and the Bobcats hardly blinked when Alex Tuch scored for Boston College to trim the Eagles’ deficit to goal in the opening minute of the second period.

Smith countered four minutes later, restoring a two-goal cushion for Garteig, who made it stand. BC got off 14 shots in the third period, most of them in one-man advantage situations, including the final 1:37 when the Eagles pulled goalie Thatcher Demko, who had 27 saves.

“Even though it was 3-1, I thought we’re built to come back,” York said. “We really played well, I thought, in the third period. We got it to 3-2 and then with the goaltender pulled, I thought we got two really exceptional chances to score that the kid made unbelievable saves on.”

Boston College finished 1 for 5 on the power play.

Quinnipiac improved to 27-02 when leading after two periods.

“I don’t think it was the prettiest game on the planet but this team is resilient,” Pecknold said. ” Great character. Great culture. And all year long we’ve found ways to win. That’ what we do.” 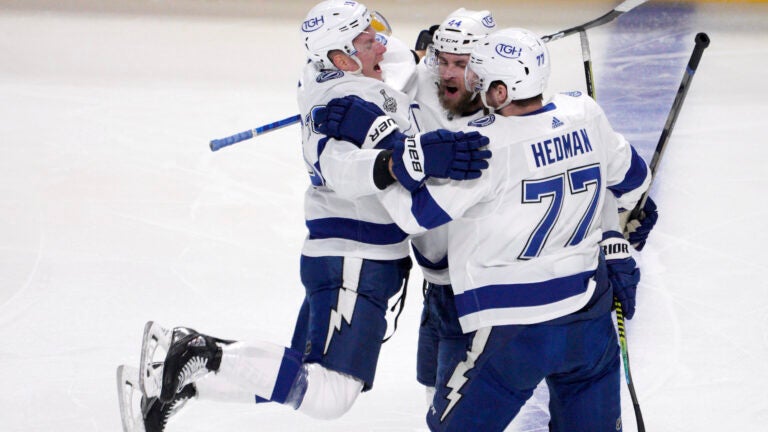