INDIANAPOLIS (AP) — High speed, risky maneuvers and a crowded field have always been a dangerous combination at the Indianapolis 500. But at a race that has too often ended in tragedy for drivers, crew members and fans, the most spectacular crashes are often the most unforgettable. As Indy celebrates its 100th race on May 29, The Associated Press looks back at some of the worst crashes over the past century.

Two-time race winner Bill Vukovich seemed destined for greatness at Indy. He won from the pole in 1953, won again in 1954 and led by a half-mile early in the 1955 race. When Rodger Ward lost control of his car because of a broken axle on Lap 57, Al Keller pulled his hand brake to avoid a collision. Keller’s car veered back onto the track and plowed into Johnny Boyd, who skidded between Ward and the wall — and directly into the path of Vukovich. The best driver of the ’50s, couldn’t avoid the crash. Vukovich’s car tumbled over the outside wall, toppled end over end (20:58) and rolled over on its side before coming to a stop. The 36-year-old racing star was killed instantly.

Tony Bettenhausen, the fearless driver from Illinois, was every bit as well known for winning races and championships as flipping cars and surviving close calls. He retired three times before a 1959 Indy crash sent his car sliding 33 feet into the infield upside down. Two years later, Bettenhausen tried to help out an old friend by testing Paul Russo’s struggling car with tragic consequences. In the front straight, Bettenhausen lost control of Russo’s car and slammed into the outside wall. It rolled 325 feet, snapping metal poles and ripping off the 3-foot high fencing before it became entangled in steel cables and burst into flames. Series officials determined the crash was caused by a bolt that fell off, allowing the front axle to twist and forcing the car into the wall.

The 48th running of the Indianapolis 500 was one of the darkest days in race history. Dave MacDonald, a rookie, was moving through the field quickly late on the second lap when his car spun coming out of the final turn. The car hit the inside wall, causing an explosion that sent the car careering across the track and directly into the path of Eddie Sachs. The two-time pole winner slammed into MacDonald’s burning car, creating a second explosion that sent a billowing black cloud (17:40) across the front straightaway. A frightening sound, screeching brakes, reverberated as drivers tried to evade crashing in the dense smoke. MacDonald and Sachs were killed, five other cars were involved and the race was stopped for more than an hour. Series officials responded to cries for a racing ban by imposing new safety measures, including fuel cells.

Speculation about cracking 200 mph vanished during a month everyone wanted to forget. Driver Art Pollard was killed in a horrific pole-day qualifying crash. As the race started, Salt Walther and Jerry Grant touched wheels, launching Walther’s car into the catch fence . The impact broke a support pole and showered the crowd with debris. Walther’s car pin-wheeled down the front straight with fuel pouring onto the track. Walther sustained severe burns and a crushed kneecap but survived. When the rain-delayed race continued two days later, Swede Savage was severely burned after his car made a sudden, sharp left turn coming down the front straight and slammed into the inside wall. Amid the chaos, crew member Armando Teran began running down pit lane to help Savage, but he was hit and fatally injured by a fire truck going the wrong way. Savage never recovered and died July 2, 1973. The race ended after 133 laps with only 10 cars still on the track.

Tom Sneva became the talk of the town in ’75 when he and rookie Eldon Rasmussen touched wheels in the second turn. The contact sent Sneva’s car airborne and into the catch fence as it caught fire. When Sneva’s burning car landed on the track, it tumbled side over side before rolling to a stop in the back straight. Somehow, Sneva managed to climb out of the cockpit without help and was not seriously injured. He went on to become one of the fastest qualifiers during the 500’s golden era.

With television cameras and crews still explaining how Rick Mears and six of his crew members were seriously burned in a pit fire, Danny Ongais’ frightful crash on Lap 63 caused even more confusion. The original Flyin’ Hawaiian was traveling at about 210 mph when he hit the outside wall in the third turn and eventually rolled to a stop with his car in flames. Safety workers shielded television viewers from the scary scene by parking in front of the car with Ongais still seated in the cockpit as the air filled with white smoke. Debris landed in the stands, injuring three track workers. Ongais was later diagnosed with serious leg injuries but started six more times at Indianapolis and remains the only Indy starter from America’s 50th state.

Nebraska native Gordon Smiley was not the best-known driver attempting to qualify2. But with the pole-winning speed jumping nearly 6½ mph from 1981, everyone including the 36-year-old Smiley was pushing the limits on Pole Day. Smiley never got a chance to show what he could do. As his car sped through the third turn on the second warmup lap in qualifying, Smiley tried to save his car after it wiggled. The overcorrection forced his car to turn hard to the right and into the outside wall, nose first at speeds approaching 200 mph. The fuel tank exploded, the car disintegrated and debris tumbled down the track with Smiley’s body exposed. Track officials said he was killed instantly. Smiley’s death was the first at the 2.5-mile Brickyard since 1973, and remains the last to occur during a qualifying attempt at Indy.

Kevin Cogan’s second Indy start came between Rick Mears and A.J. Foyt on the front row. When the green flag waved, Cogan accelerated and his car veered hard to the right, turning into Foyt, and then hard to the left, taking out Mario Andretti on the inside of Row 2. Incredibly, Cogan smashed the chances of two fan favorites in one unforgettable sequence (18:30). Then the fireworks began. Andretti climbed out of his cockpit and shoved Cogan as the young driver tried to explain himself. Andretti told the television audience the crash was the result of a child trying to do a man’s job. Foyt went even further, cursing and calling him “Coogan” on the public address system. Foyt and Andretti have since acknowledged the accident was most likely the result of a mechanical failure, not Cogan’s inexperience.

Patrick Bedard, a former writer for “Car and Driver” magazine, decided to give the Indy 500 a second chance. Bedard was coming through the third turn when his car plowed violently into the inside wall and split into pieces with Bedard still in the cockpit. The car flipped end over end several times before stopping in the grassy infield. Track workers eventually got Bedard into an ambulance. He was diagnosed him with a concussion and a broken jaw. Bedard later said he didn’t remember the crash, returned to his day job and never competed again at Indianapolis.

During 1991 practices, Mark Dismore was coming out of the fourth turn at more than 215 mph when his car went to the right and backed into the inside wall. If the crash ended there, Dismore wouldn’t even be close to making the list. Instead, the car rebounded and slammed hard into the attenuator at the end of pit lane. As debris flew, Dismore’s car caught fire and slid dangerously through the pits where fuel tanks and crew members were in close proximity. Luckily, the car didn’t hit anything or anyone. Doctors diagnosed Dismore with a fractured neck and injuries to his feet, arms and legs, and he returned to racing.

Stan Fox’s car made a hard right coming through the first turn, sending him into the outside wall as he collected five other cars and left debris was all across the track. The front half of Fox’s car was sheared off, exposing his legs and feet, which were touching the asphalt surface. Fox eventually recovered from severe head injuries sustained in the wreck but never raced again. Two future Indy winners, Eddie Cheever and Gil de Ferran and Lyn St. James, the only woman to start the ’95 race, all got caught up in the spectacular melee.

After winning his second straight Indy pole in 1996, Scott Brayton looked like the future of the IndyCar Series. He was popular, had Midwestern roots and a flamboyance the series needed as Indy’s aging favorites faded away. But a blown tire sent his backup car hard into the outside wall in the second turn during practice. The car skidded into the back stretch before rolling to a stop. Thirty-three minutes later, doctors pronounced Brayton dead. Series officials eliminated turbochargers in 1997. The decision cut the pole-winning speed by nearly 15 mph and nearly 18 mph off Arie Luyendyk’s record four-lap qualifying speed of 236.986 from 1996. Nobody has challenged Luyendyk’s track records since.

When the final lap began, Mike Conway and the slowing Ryan Hunter-Reay were battling for position between the third and fourth turns when Hunter-Reay’s car ran out of fuel. The much faster Conway had no immediate escape route, and the two cars touched. While Hunter-Reay’s car stayed on the ground, Conway’s car went airborne and started flipping sideways. At the last moment, his car made one last, fortuitous turn, allowing the car’s underside to hit the catch-fence before rebounding and nearly landing on top of Hunter-Reay. Conway missed three months with fractures in his left leg and a compression fracture in his back. He later said he no longer wanted to race on ovals.

J.R. Hildebrand was in perfect position to end the American drought when a rookie mistake on the final turn of the race proved costly. With only the slower car of Charlie Kimball and one more turn to navigate on the final lap, Hildebrand decided to pass Kimball on the high side. He got into the rubber marbles and immediately spun. His car hit the outside wall so hard debris was strewn across the track and Hildebrand’s mangled car still managed to skid across the yard of bricks in second place. Fortunately, Hildebrand was not seriously injured. Dan Wheldon got his second 500 win in what might go down as the biggest mistake (12:50) in Indy history. 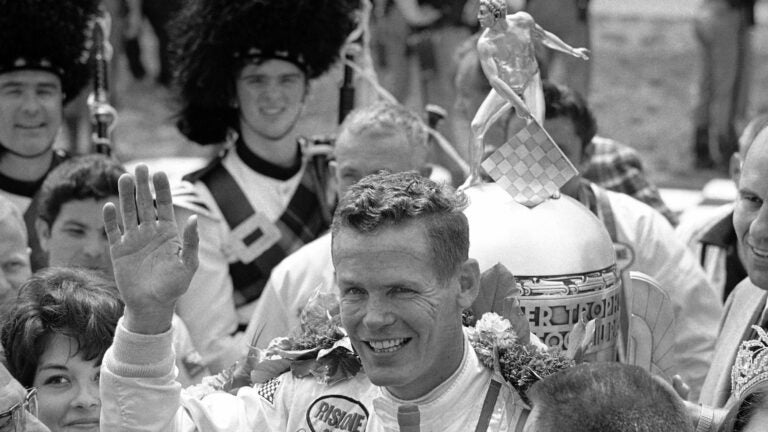