Even by the monumental standards of New England sports, 2017 was a momentous year. A Super Bowl miracle, a franchise-altering offseason, and the return of a truly dominant ace were just a few of the major storylines.

Added to that were stories of protest, expressed through the medium of sports. As has been the case in the past, the world of sports became a setting for a larger societal conversation.

Here’s a look back at the truly unique year of 2017, and the most important Boston sports moments from it:

JAMES WHITE WINS IT FOR THE @PATRIOTS!

WHAT A GAME! #SB51 #PATRIOTS https://t.co/nZzQJGWRmC

Feb. 5: In the handshake that Patriots fans were waiting for, Roger Goodell congratulates Tom Brady on his Super Bowl win in a season Brady began suspended over the Deflategate controversy

The moment we’ve all been waiting for, Commissioner Goodell shaking Tom Brady’s hand after winning the #SuperBowl. #Patriots pic.twitter.com/oyE2zSM1xD

Feb. 14: For the first time since 1993, the Harvard men’s hockey team wins the Beanpot

April 3: Red Sox fans give Chris Sale a warm reception in introductions before the season opener

April 16: After the death of his sister the day before, Isaiah Thomas broke down prior to Game 1 of the Celtics’ playoff run. Teammate Avery Bradley offers encouragement

An emotional scene in Boston as Isaiah Thomas will try to play in Game 1 vs. the Bulls pic.twitter.com/SwGSsYZjvN

April 16: During Game 1 against the Bulls, Thomas nails an early three-pointer, and TD Garden erupted in support

April 17: After winning her debut Boston Marathon, 37-year-0ld Edna Kiplagat is greeted by her children at the finish line

April 17: And in his final Boston Marathon as a professional, Meb Keflezghi shares a moment with the family of 2013 bombing victim Martin Richard

April 23: In the midst of a Red Sox-Orioles feud, Dustin Pedroia tries to explain to Manny Machado that he wasn’t responsible for the perceived intentional inside pitch that went behind Machado’s head

Fascinating exchange captured by MASN between Machado and Pedroia. Dustin clearly saying “It wasn’t me. I know that and you know that.” pic.twitter.com/oqdt827ER9

May 15: In a contentious series between two teams in a budding rivalry, things boil over in Game 3 when Wizards forward Kelly Oubre was ejected for shoving Kelly Olynyk

May 21: Avery Bradley’s three-pointer rattles home to give the Celtics a last-second Game 3 win in the Eastern Conference Finals

May 25: Trailing by more than 30 points in the closing stage of the Eastern Conference Finals, Celtics fans nonetheless send their team out with rousing support

It’s all for you, @DavidOrtiz.

Aug. 1: Capping one of the games of the season, Christian Vasquez’s walk-off three-run home run gives the Red Sox a 12-10 win over the Indians

Sept. 13: During a Red Sox game, protestors hang a banner from the Green Monster that reads “Racism is as American as baseball“ 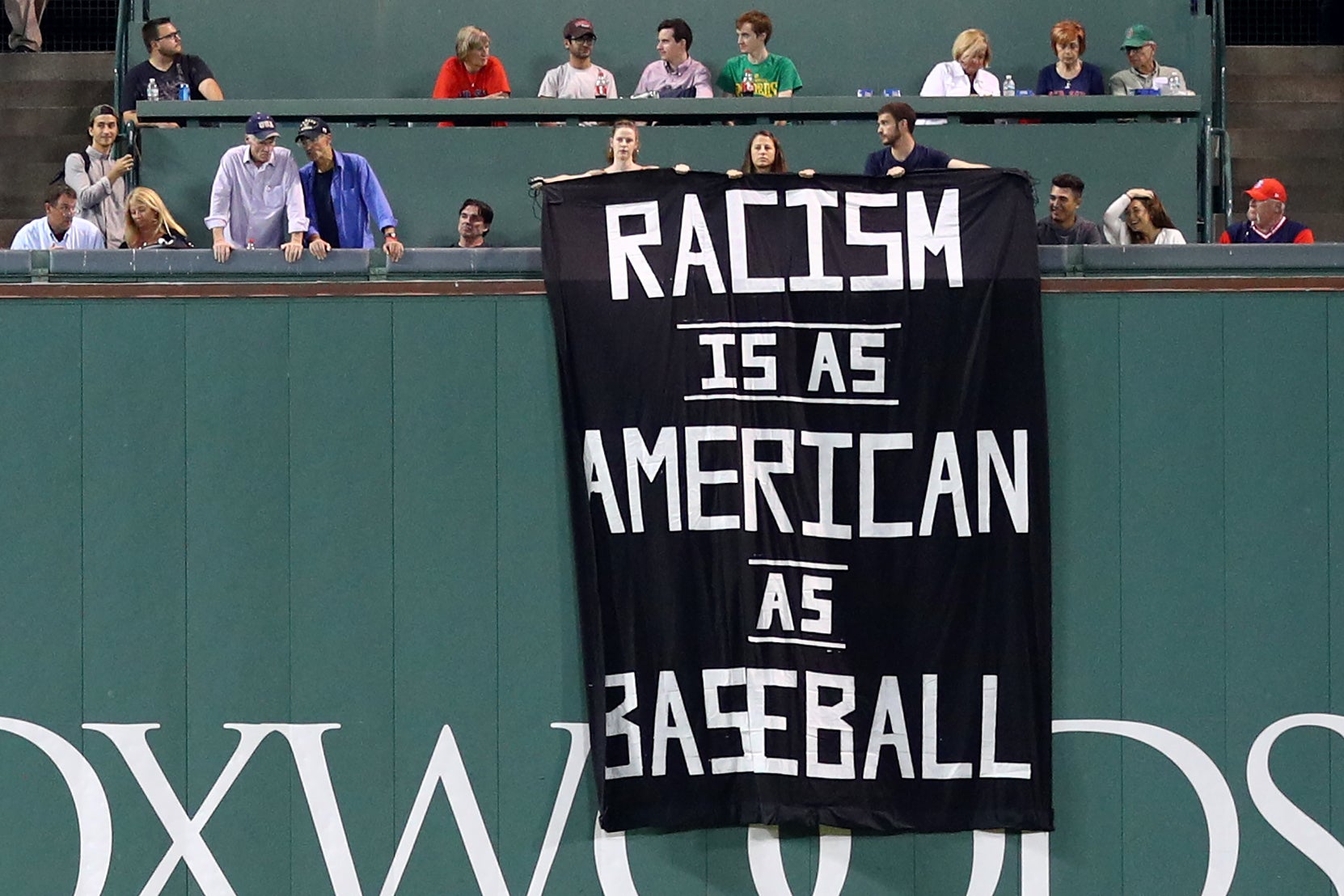 A banner with the message “Racism is as American as baseball” is draped over the Green Monster during the fourth inning of the game between the Boston Red Sox and the Oakland Athletics.

Sept. 21: Chris Sale records his 300th strikeout of the 2017 season, becoming the first American League pitcher to reach the milestone since Pedro Martinez in 1999

Sept. 24: In response to comments made by President Trump, 17 Patriots players (as well as many others around the NFL) protest by kneeling during the national anthem 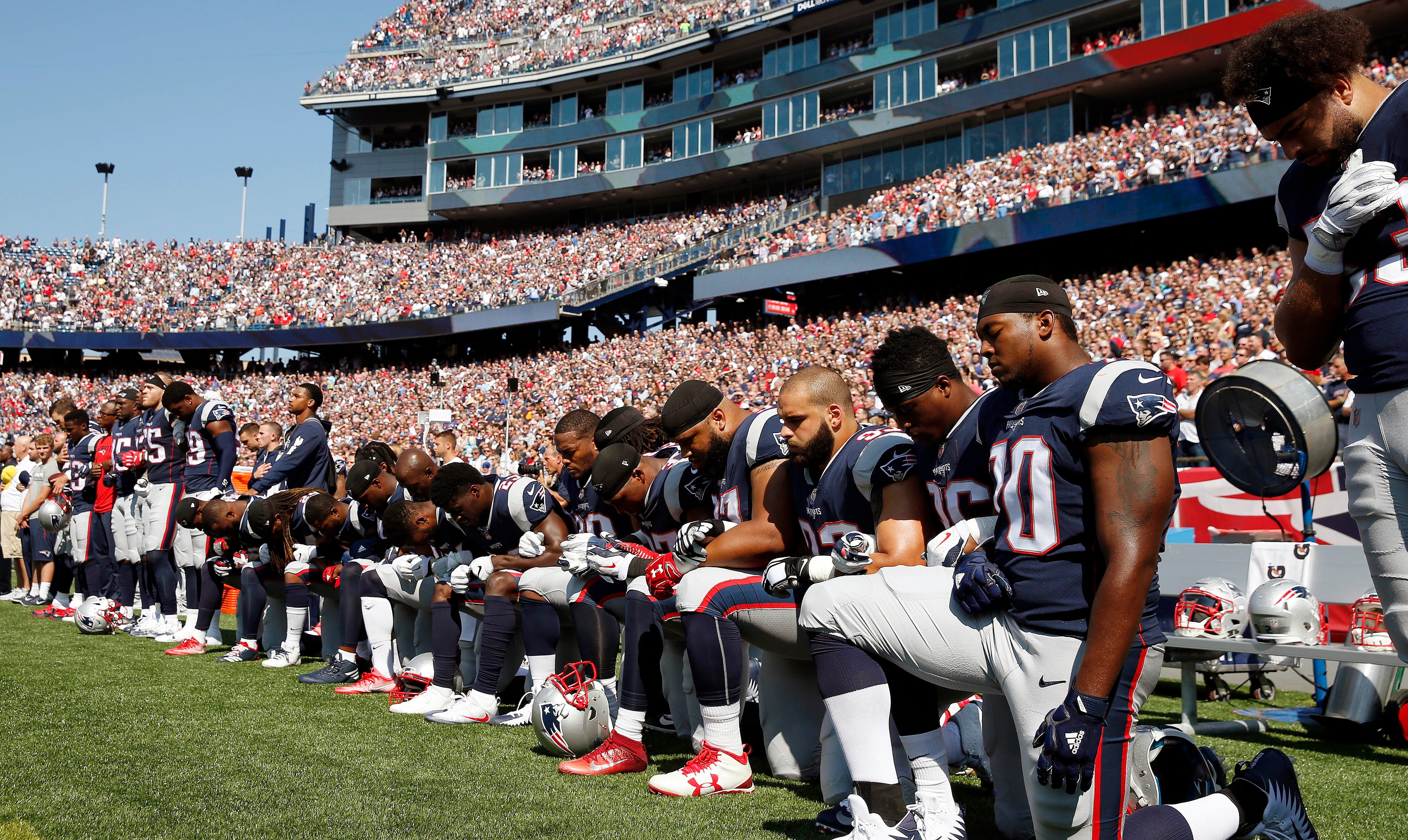 In this Sept. 24, 2017 file photo, several New England Patriots players kneel during the national anthem before facing the Houston Texans in Foxborough, Mass.

Sept. 24: With less than 30 seconds remaining against the Texans, Tom Brady finds Brandin Cooks in the corner of the end zone for a winning touchdown 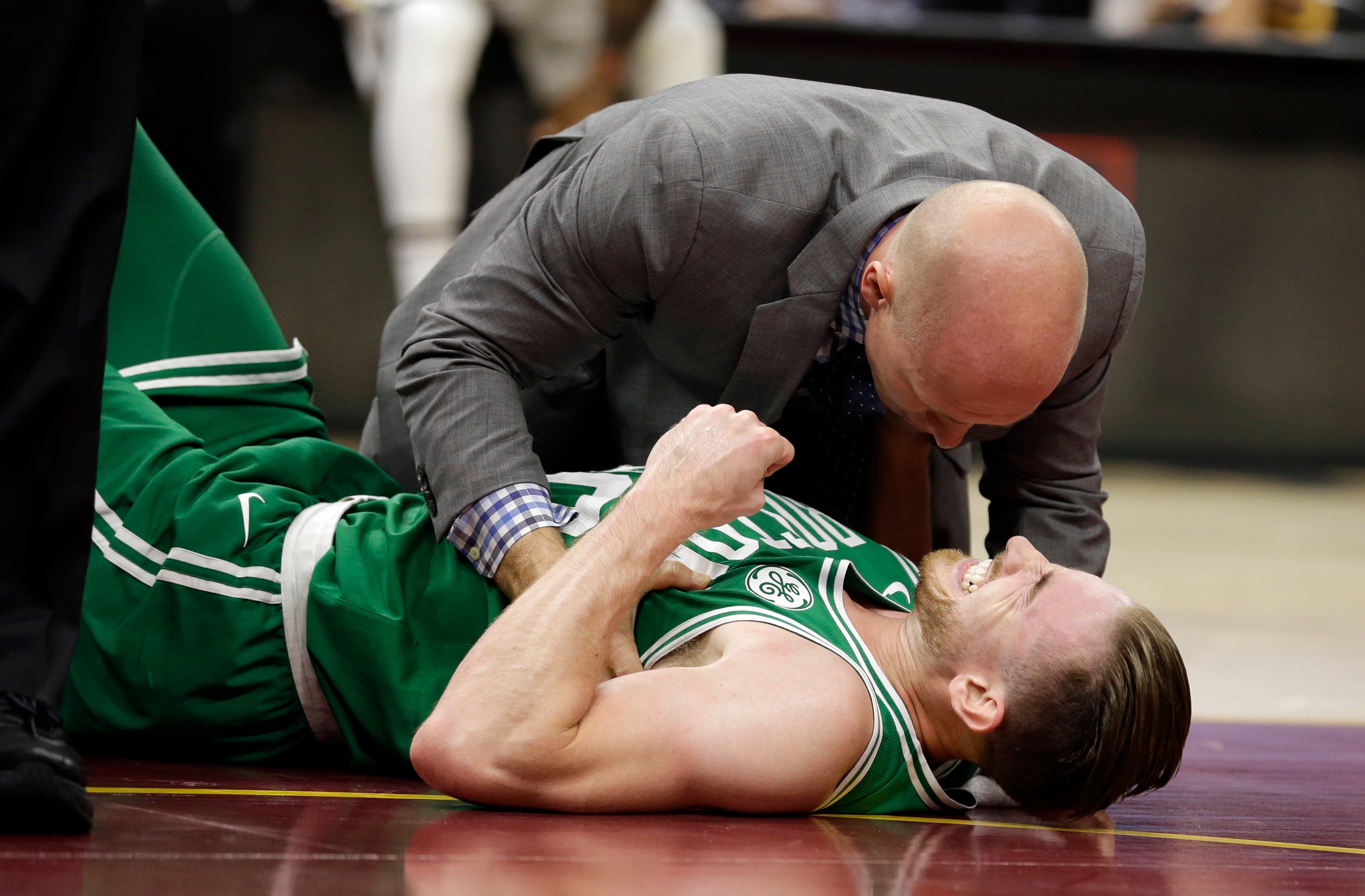 Nov. 5: Becoming the first American woman to win the New York City Marathon since 1977, Marblehead’s Shalane Flanagan lets the emotion pour out as she celebrated

The American comes out on top. pic.twitter.com/lkFOrhAmS7

What the hell are you doing, Gronk? pic.twitter.com/mZTgJA62eU

Dec. 17: In the culmination to a wild end of a Patriots win against the Steelers, Ben Roethlisberger’s fake spike turns into a Duron Harmon game-ending interception