Tuukka Rask made 31 saves for Boston as the Bruins beat the Maple Leafs 3-1 to take a 3-1 lead in the series. Mookie Betts and Andrew Benintendi both homered in the Red Sox’ 8-2 win over the Angels in Anaheim.

Former Bengals offensive lineman Evan Mathis sold a 1952 Mickey Mantle Topps rookie card for $2.88 million on Thursday. The card was graded by Professional Sports Authenticator as a 9 out of 10, according to ESPN’s Darren Rovell, and was acutioned by Heritage Auctions.

Mathis decided to sell the card, his prized possession, after retiring last year. He needed to free up money to buy a new house, per USA Today, so he parted with what he called, “the Mona Lisa of the sports card world.” His card is one of six to earn to earn the Mint 9 rating. Three others are rated Mint 10. Mathis has been collecting baseball cards since he was a kid in the 1980s, and traded the vast majority of his collection for the Mantle card two years ago.

“I don’t think I’ll have any regrets because I’ll have a nice house to show for it instead of the card,” he said. (ESPN)

What you need to know about Tom Brady’s status with the Patriots: A recent report that the Patriots quarterback has yet to commit to playing in 2019 raised some eyebrows around New England. Why would Brady retire now? What has No. 12 been up to this offseason? Should fans be concerned? Nicole Yang has the answers. (Boston.com)

“There’s no replacing Gil Santos,” Socci wrote. “He was, is and will remain the Voice of the Patriots — the voice of football in New England. He and Gino have a legacy all their own, leaving [Zolak] and me to try to create our own distinct soundtrack for the Pats.” (Boston.com)

Here’s the Patriots’ schedule for the 2018 season: New England’s road to Super Bowl LIII kicks off against Bill O’Brien’s Texans, includes an early matchup with Matt Patricia in Detroit, and finishes against the Jets at Gillette Stadium. (Boston.com) 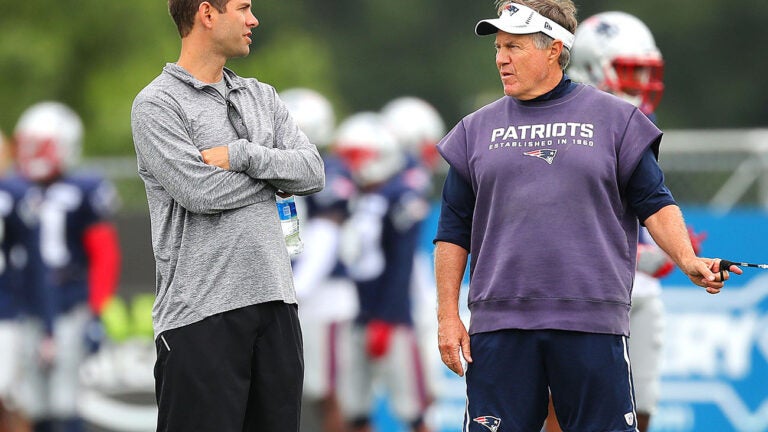