Lee Nguyen showed why the Revolution built their squad around him for much of the last decade, as he led the way in a 2-1 win over New York City FC at Yankee Stadium Sunday.

Nguyen set up Teal Bunbury’s third-minute goal, then converted an 80th-minute penalty kick as the Revolution (6-4-7, 25 points) moved within a point of fifth-place NYC FC (8-7-2, 26 points) in the Eastern Conference.

The Revolution, who meet the Montreal Impact at Red Bull Arena in Harrison, N.J., Wednesday, snapped a 183-minute scoreless streak. Nguyen, re-acquired by from Los Angeles FC in early September, now has totaled 52 goals and 50 assists for the team.

The Revolution started attacking early, Tajon Buchanan earning a free kick 16 seconds into the match. Bunbury opened the scoring off a quick counterattack, converting his fifth goal of the season in the third minute. The sequence started with a clearance from DeJuan Jones to Bunbury at the halfway line opposite the team benches. Bunbury chested to Nguyen, whose one-touch return put Bunbury through for a 40-yard run as he outpaced three defenders and poked a shot with the outside of his left foot past Sean Johnson in the third minute.

The Revolution were effective going forward on the wings, but lost effectiveness after Cristian Penilla (foot) was injured, and replaced by Diego Fagundez. NYC FC began asserting itself, and Revolution captain Scott Caldwell went down with what appeared to be a neck injury after a clash with Ismael Tajouri-Shradi. Revolution players also appeared to struggle with their footing, several slipping on the Yankee Stadium grass. Matt Turner cut the angle to stop a Valentin Castellanos breakaway (26th) and a Castellanos shot (first-half injury time).

NYC FC took control at the start of the second half, a Castellanos shot blocked by Brandon Bye (53d). Arena’s triple substitution helped the Revolution regain momentum. But they squandered a two-on-one and three-on-one breakaways, failing to get a shot, before Nguyen’s 80th-minute penalty kick. Substitute Matt Polster earned the penalty, going down in a clash with Alexander Callens, off a Jones throw-in. Nguyen converted a low shot into the right side of the net as Johnson dove to his right, his first goal for the Revolution since 2017. Callens cut the deficit, re-directing a corner kick off the far post in the third minute of added time. 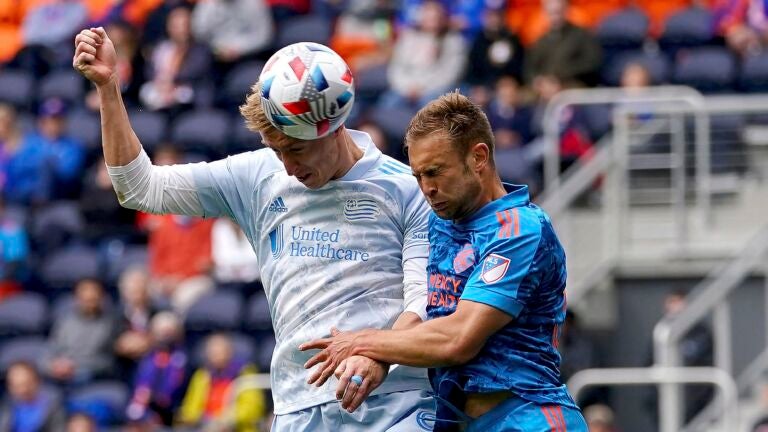