LONDON (AP) — Just when it really mattered, the routine Sam Mewis worked on at Manchester City with teammate Alex Greenwood in the days before the FA Cup final finally came off.

“Obviously I kept missing in practice, so it felt great to put one away,” Mewis said after heading into the net against Everton from Greenwood’s corner.

Such was City’s control of the 50th final that the Women’s FA Cup holders should already have had a comfortable lead before the opener from American World Cup winner Mewis in the 40th minute.

But Valérie Gauvin nodded Everton level on the hour and Mewis missed a chance to seal victory before extra time when a 3-1 victory was eventually sealed.

Everton goalkeeper Sandy MacIver thwarted City’s pursuit of a winner before substitute Georgia Stanway found a way past her at the near post in the 111th minute.

And with the final touch of the game, another substitute — Canadian forward Janine Beckie — wrapped up the victory with a low finish after being set up by Stanway.

“It was tough on the legs,” Mewis said. “But everyone got through it. I am really proud of the group. It was a tough grind and the subs that came on did great.

“There are girls who played in the FA Cup last year to get us to this point.”

This was City’s third Women’s FA Cup triumph in four seasons — a winning streak that began with another American, Carli Lloyd, netting in the 2017 victory over Birmingham.

And this was a double American triumph under the Wembley arch with Rose Lavelle also picking up the trophy after a successful introduction to English soccer.

The opening goal by @sammymewy! 🔥

Mewis wasn’t the first American to score in a pandemic-delayed FA Cup final at Wembley in 2020. Christian Pulisic also netted for Chelsea’s men.

Pulisic had nothing to celebrate as he came off injured and Chelsea was beaten by Arsenal.

Mewis had a day to remember, but one with limited celebrations due to the pandemic keeping fans out of Wembley.

The moment they’ve all worked towards! 🏆🙌 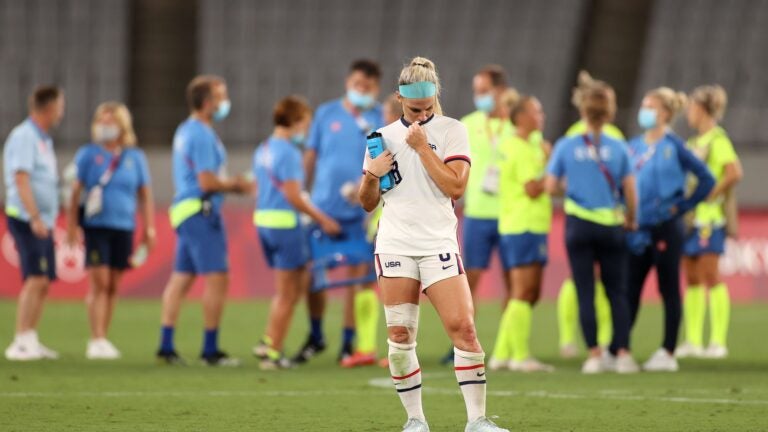 Sweden stuns US 3-0 in women's soccer at Olympics